Western Australian grain growers in frost-prone areas are advised to structure their seeding programs carefully to help minimise the risk of frost damage to crops in spring.

ConsultAg consultant Garren Knell said his message to growers was not to avoid sowing crops early, but rather to assess the frost risk of different areas of their farms and to tailor crop species, varieties and sowing times accordingly.

“Due to a number of factors including large cropping programs, many growers routinely plant about half of their cropping programs by mid-May, and it is not an option to delay seeding,” Mr Knell said.

“Structuring your program to minimise frost risk involves avoiding early sowing of shorter season wheat and barley varieties on your most frost-prone paddocks and considering what else you can plant on those areas early, with confidence, to minimise your risk.

“Alternative early sowing options may include hay, oats, canola, pasture or some of the new longer-season winter wheats that are now available.”

Mr Knell cautioned growers not to enter the 2021 cropping season with a false sense of security about frost after experiencing minimal frost damage in 2020.

The consultant is one of the speakers addressing free-of-charge pre-seeding frost workshops being held in the WA grainbelt in March. The events are being coordinated by the Grower Group Alliance (GGA) with investment from GRDC.

Mr Knell said that in the last two years, earlier maturity wheat and barley varieties had performed well in GRDC National Variety Trials (NVT), but this was to be expected due to the relatively short growing seasons experienced.

“Growers need to match the maturity of the variety with sowing time, and a long season wheat is always better than a short season variety when sown early in frost-prone areas,” Mr Knell said.

“Some growers might be hesitant to dry sow a mid-long season wheat variety like Cutlass early due to the risk of a late May germination that could reduce yields by up to 400 kilograms per hectare, compared with a shorter season variety.

“However, if they dry sow a short season wheat variety in frost-prone areas and it germinates in early May, it is likely to get frosted and they could miss out on tonnes per hectare, rather than just kilograms per hectare.”

Mr Knell advised growers to identify frost prone areas of their farms and to map areas of low, medium and high risk.

“On parts of the farm that are low risk, it is OK to ‘push the envelope’ a bit, but on areas of greater risk it’s advisable to do things differently,” he said.

Mr Knell said many growers at the frost workshops were adapting their farming systems and minimising their risk.

“In many cases, what has been their lowest performing country in past years is now their most profitable, as they substituted crops such as hay and oats for wheat on frost-prone land,” he said. 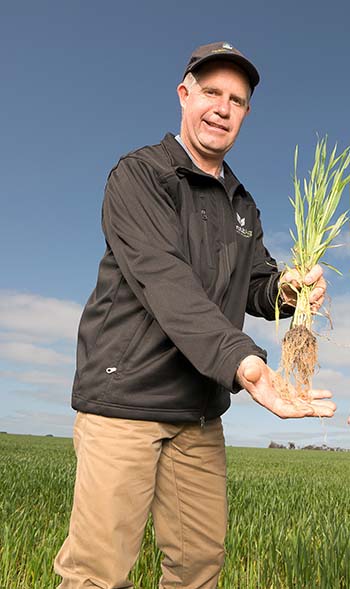 “The changes have not necessarily been consciously centred around frost, but rather about increasing their profitability.”

Mr Knell said for those growers who had received at least 50-75mm of rain in early March, early sowing (in March or April) of canola and long season winter wheats, such as Illabo and Longsword, could be considered on areas of their farm that had a lower frost risk.

“But if you are intending to seed a mid-long season wheat variety Cutlass on a high-risk paddock, consider planting it a little later,” he said.

“These more frost-prone paddocks are usually in lower lying areas of the farm, and often retain moisture and finish better late in the season, meaning mid-long season varieties, sown a little later, can be a good fit.”

Mr Knell also advised growers to be conscious that many newer barley varieties, like many of the newer wheat varieties, also tended to be shorter season types.

“Although barley is generally more tolerant to frost than wheat, barley is more susceptible to frost at the grain fill stage,” he said.

Growers at the workshops have had the opportunity to review their 2021 seeding plans and develop farm actionable frost management plans with advice from the experts.

In addition to Mr Knell, presenters include Ben Biddulph, of the Department of Primary Industries and Regional Development, who is providing a summary of 10 years of frost research, much of which has had GRDC investment.

A recent research finding that Dr Biddulph will outline, from work funded by the Council of Grain Grower Organisations (COGGO), is the discovery that a type of bacteria found on stubbles, and present in rainfall, may elevate the risk of damage to cereal crops – particularly after rainfall less than 5 millimetres in the late afternoon prior to frost.