Research has identified the best cover crops to suppress weeds in New South Wales and Queensland.

Cover crops are mostly planted during summer or winter as an alternative to leaving paddocks bare.

“By soil health, I mean they can fix carbon, improve soil porosity and increase nutrient cycling,” he says.

“However, a key focus of our research was to explore the impact of different cover crop species and dual-species mixtures on weed growth and development.”

“Most of Queensland and northern NSW typically receives a significant amount of summer rainfall. There is an opportunity to use cover crops to harvest the water that frequently runs off bare paddocks, especially those on black cracking clay soils,” he says. 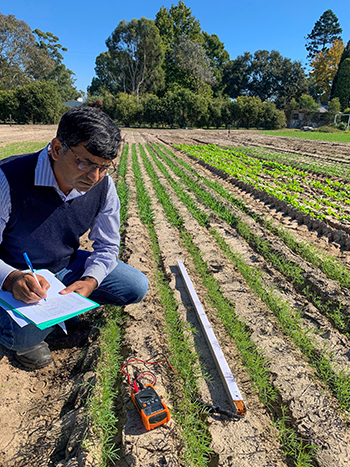 They measured crop and weed biomass at early and late growth stages. Using capacitance probes, soil water was measured at 20 centimetres and 70cm.

Dr Shabbir says forage sorghum and the sudangrass hybrid produced the most biomass by day 40 and 80, with no weeds found.

At Wagga Wagga, forage sorghum produced the most biomass regardless of termination time.

Dr Shabbir says that although forage sorghum produced the most biomass, buckwheat was more suppressive of weed growth at both termination times. 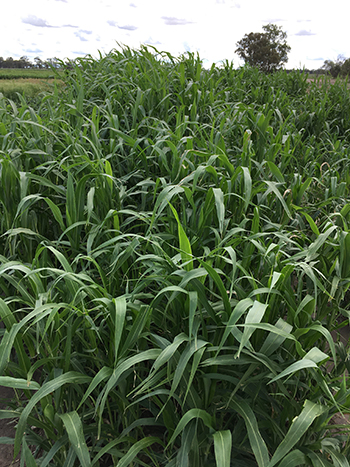 “It appears buckwheat releases allelochemicals that inhibit weed emergence and growth,” he says.

Dr Shabbir says the millet was the main contributor to biomass in the millet-lablab mixture.

“By day 40, millet-lablab biomass production was lower than the millet monoculture,” he says.

“But by day 80, the biomass of the mixture was higher than millet alone.

“The takeaway from this is that grass is important in a cover crop mixture, but legumes add nitrogen and diversity, which is likely to be better for soil biota and fertility.”

Dr Shabbir says a teff-cowpea mixture was also tested: “Teff is a comparatively new grass species for forage in grain production regions. It performed well, although was not as vigorous as millet during early growth.

“From day 40 to 80, teff growth was more vigorous, and the 50:50 teff-cowpea mixture produced more than 10 tonnes per hectare of biomass.”

Dr Shabbir suspects the cowpea added nitrogen, which supercharged the growth of the cover crop mixture.

At Wagga Wagga, where weed pressure was high, researchers assessed a millet-cowpea mixture. The results showed millet alone performed well in suppressing weed growth, but the 75:25 mixture of millet-cowpea produced even more biomass than the grass alone by day 100. 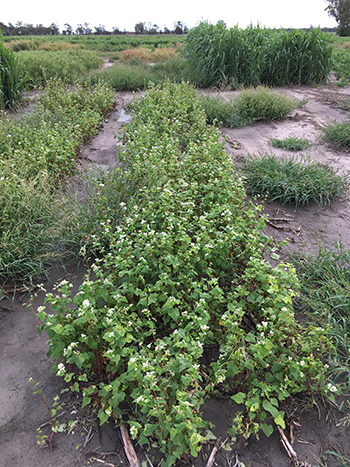 A millet-lablab mixture was also tested at Wagga Wagga, with millet contributing significantly to the biomass.

By day 100, the 50:50 millet-cowpea mixture produced the most biomass; however, it was not as weed suppressive as the pure millet cover crop.

A secondary aim was to explore the impact of cover crops and termination timings on soil moisture.

He says this is probably because more than 250 millimetres of rain fell during the trials at Narrabri and Wagga Wagga.

Summer cover crop experiments were planted in November 2021 at both locations to assess the impact on soil water at crop termination in early 2022.

Each species within each cover crop mixture was tested at different ratios to determine the optimum percentage of legume to tillage radish or grass species.

The crops were planted in mid-May at Wagga Wagga and in late April at Narrabri.

At Narrabri and Wagga Wagga, the researchers relied on the natural weed seedbank, which was high.

“If you want to suppress early winter weeds, forage oats and tillage radish do that well.”

However, he says growing forage oats as a monoculture cover crop is not ideal because it could lead to disease management issues in continuous cereal phases.

“Tillage radish helps to break the disease cycle while also improving soil porosity because of its large taproot,” he says.

In terms of weed biomass under the different monocultures at Wagga Wagga, Dr Gurusinghe made several observations:

Dr Gurusinghe says two cover crop species were also sown together at different rates to assess the impact on weeds.

In the forage oat-vetch mixture, changing the percentage of forage oats to vetch had no significant impact on weed biomass.

However, in the forage oat-field pea mixture, he says, forage oats needed to comprise at least 25 per cent of the mix to suppress weeds.

At Kingaroy, forage oats, tillage radish and vetch produced the most biomass and performed well in suppressing weeds.

“Vetch was a better choice in comparison to field peas at Kingaroy,” he says.

When the dual mixtures were assessed, Dr Gurusinghe says any combination of species performed as well as a pure stand of forage oats.

“Soil water use will be similar between the monocultures and the dual mixtures,” he says.

“In Queensland and the northern half of NSW, the amount of stored soil water in the soil profile at planting will improve the reliability of crop yield,” he says.

“In wet growing seasons, the amount of stored soil moisture is less important but in an average or drier season, if you don’t have water in the ‘bucket’ you’re setting yourself up for failure.”

In DAF, CSIRO and NSW Department of Primary Industries farming systems trials, with GRDC co-investment, Mr Erbacher and his team compared the fallow efficiency of wheat (which provides ample ground cover) with chickpeas (which leave low residue levels on the soil surface).

Results showed the fallow efficiency of a crop planted after wheat is, on average, about double that of chickpeas.

“If you have a fallow with nil or low levels of ground cover, there will be some water ‘in the bucket’ but it will take longer to accumulate enough to grow a profitable grain crop,” Mr Erbacher says.

“After you terminate the cover crop, you’ll improve fallow efficiency and, if your fallow length and/or rainfall is high enough, you’ll have more water than if you left the paddock bare.”

CSIRO’s Brook Anderson modelled the impacts of a spring-planted cover crop in a short fallow between sorghum and wheat.

“Her results showed a soil water storage benefit from cover crops in 50 to 70 per cent of years, with an average increase of 17mm across all years, equating to about 250 kilograms/ha/year of extra grain yield potential.

“Added to this, cover crops can reduce the need to apply a fallow spray in paddocks, reducing input costs and potentially delaying the onset of herbicide resistance in weeds.”

For researchers, determining which mechanisms are involved in cover crop weed suppression in field trials is challenging.

Accordingly, he set up a laboratory experiment with annual ryegrass and cress to determine whether crop residues are active against weed seed germination.

“All cover crop stubbles (that) we assessed, but particularly forage oats and tillage radish residues, had a strong impact on weed seed germination,” he says. 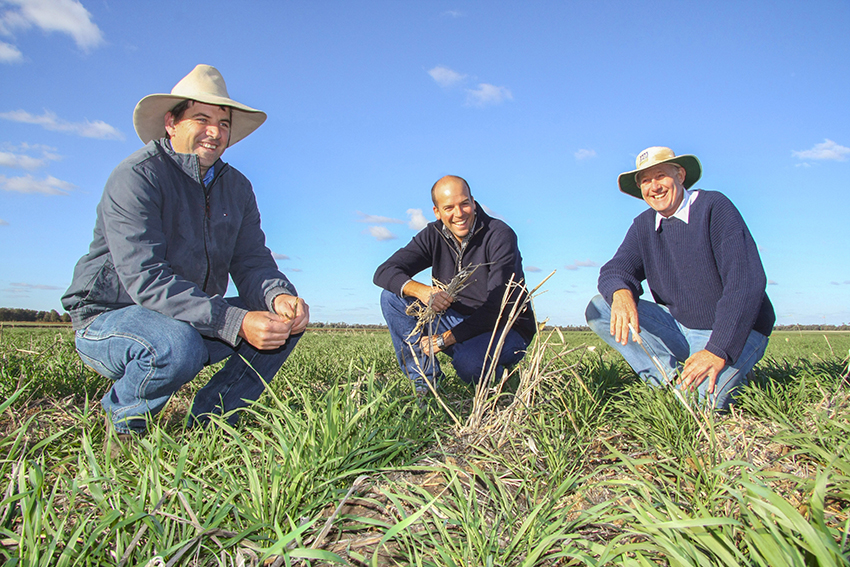 Queensland Department of Agriculture and Fisheries (DAF) research agronomist Andrew Erbacher says his objective in growing a cover crop is to select a species that will reach peak biomass production as quickly as possible so it can be terminated early.

“Millet followed by sorghum are the two cover crop species most commonly grown in Queensland,” he says.

“Millet is small-seeded and germinates at cool temperatures, which allows earlier sowing in spring.

“The aim is to have the crop sprayed out as early as possible to improve the chance of soil water recharge ahead of sowing.”

He says sorghum has a much-larger seed, so can be planted deeper than millet, which leads to even establishment in hotter or drying soils.

“The key to achieving a soil moisture benefit from a cover crop is having an effective and even establishment and terminating the crop as soon as the volume and type of stubble needed are produced.”

The need to apply starter fertiliser with the cover crop will depend on soil nutrient reserves.

“A soil test will indicate if there is enough available phosphorus and nitrogen for high early seedling vigour,” he says. “A crop with adequate nutrition will use water more efficiently to grow biomass.”

If only a short fallow period is available, Mr Erbacher says, a small and leafy species such as legumes or tillage radish might be suitable.

He suggests selecting a variety that will reach the desired growth stage quickly, enabling early termination.

“In Queensland and northern NSW, growing cover crops for too long can produce excessive biomass and rob water from the next crop, overshadowing any of the other benefits the cover crop could provide.”

In terms of disease, he says that following a cereal cover crop with a wheat cash crop could lead to crown rot in the wheat.

“Think about what cash crop will follow your cover crop, because this will allow you to select a cover that is less likely to increase the disease risk.”

Cover crops will use nitrogen, he says, potentially tying up what nitrogen is available to the next cash crop, but because their residue is retained it will become available as the cover crop breaks down.

“Soil test to know what nutrients are available and you may need to apply extra nitrogen, phosphorus or sulfur – if these are limiting – for the following crop,” he says.

“If you grow a quick-growing cover crop that is terminated at the late vegetative growth stage, the residue is likely to break down quickly.

“Accordingly, the nitrogen contained in the residue will cycle more quickly than if the crop is terminated at flowering.”

When it comes to deciding whether to grow a cover crop, Mr Erbacher encourages the use of the CliMate or Soilwater app.

“This allows you to consider the probable plant available water at your ideal planting date. We use 50mm of starting soil water based on observations we made in our trials, where our mid-terminated cover crop was, on average, 50mm drier than our control at spray-out.

“This exercise also provides some ‘rules-of-thumb’ about when the cover crops can be of most benefit.”

By way of example, he pointed to growers at Goondiwindi, Queensland, who plant cover crops after double skip-row sorghum in a long fallow going into wheat in the following year.

He says their aim is to sow millet in spring and terminate it by Christmas. “If the spring break doesn’t eventuate or the growers are not likely to have the crop sprayed out by Christmas, they don’t plant a cover crop.

“Think about your system, where you are located and when rain generally falls to develop some ‘rules-of-thumb’.”

He says the next step is considering when you will break your ‘rules-of-thumb’ based on seasonal forecasts. 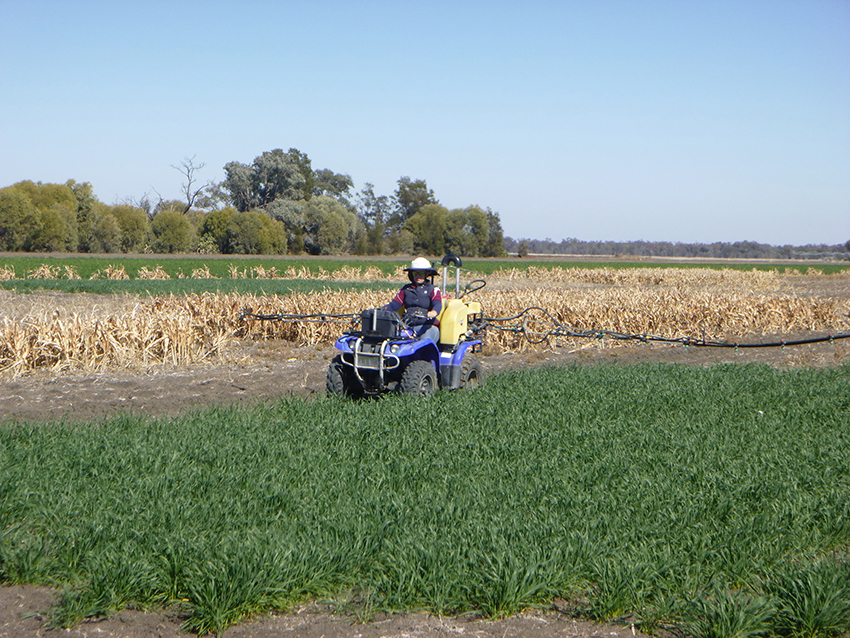 Spraying out a cover crop in Queensland Department of Agriculture and Fisheries trials. Photo: DAF

Suppose you want to use a cover crop to produce a significant amount of biomass to rid a paddock of weeds.

However, leaving enough soil moisture for the following crop is also critical, and the likelihood of recharging the soil profile with water after the crop is terminated, particularly in drier conditions, needs to be considered.

“Beyond this period, the plants enter the reproductive phase, which is likely to dry out the soil in low-rainfall seasons,” he says.

Queensland Department of Agriculture and Fisheries research agronomist Andrew Erbacher agrees, saying he had a plot in one of his experiments that was not terminated as planned.

“That plot demonstrated soil water significantly decreased in the two weeks after flowering for no extra biomass,” he says. “This was because the crop was using water to produce seed.”