Zapping weeds with lasers and electricity is being recruited in the battle against herbicide resistance.

Several companies in the US, the UK and Europe have technologies available or ready for launch in 2023 that use lasers and electricity to kill weeds.

Dr Michael Walsh, an associate professor at the University of Sydney, says his research team has explored the energy requirements of a range of alternative weed control technologies including lasers and electricity. “That review showed there was no point looking at alternatives unless they involved site-specific weed control technologies,” Dr Walsh says.

After looking at the options and thinking about the context of in-crop selective weed control, Dr Walsh says the two most viable alternatives were those that could be accurately focused on weeds. These included laser and electrical weeding.

In a paper published in Frontiers in Agronomy, University of Sydney PhD student Guy Coleman says laser treatments offer one of the highest levels of precision for targeted weed control.

Laser weed control makes use of a narrow beam of light to heat the target.

In 2020, Mr Coleman used pot trials to test lasers for their capacity to deliver targeted energy and destroy the growing points of annual ryegrass. However, as annual ryegrass plants increased in size, higher-powered lasers were needed to achieve an effective kill.

He concluded further research was needed to determine the practicality and energy requirements needed for consistent and rapid control of larger (mid to late-tillering) annual ryegrass plants.

Several companies already have laser weeding solutions ready or close to release. These are just a few examples of the technology.

US company Carbon Robotics has developed an autonomous LaserWeeder for use on vegetable farms.

The machine runs day and night using GPS and high-resolution cameras to scan weeds and feed imagery to an onboard computer. This runs recognition models to distinguish between vegetable crops and weeds. The autonomous vehicle then deploys high-powered lasers to kill weeds by burning the growing points.

WeedBot is a Latvian company making a similar solution employing lasers to destroy weeds on vegetable farms. However, a tractor tows this machine. 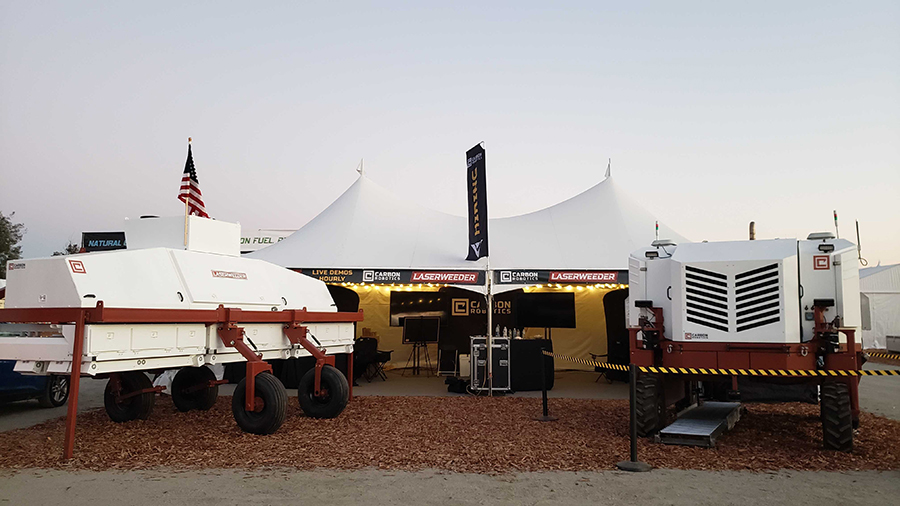 Another manufacturer developing laser weeding products is Verdant Robotics. The US company says it has built an autonomous weeder that destroys weeds with herbicide and laser technology in row crops. However, all the photographs on the company’s web site depict a tractor towed machine.

“When using an electrical charge, two electrodes are deployed – one on each side of a weed or one near the plant and the other earthed,” he says. “The energy is delivered in a short pulse or as a series of short pulses.

“Continuous-contact electrical weeding uses an electrode such as a bar to pass an electrical current through the plant for the duration of the contact period.” 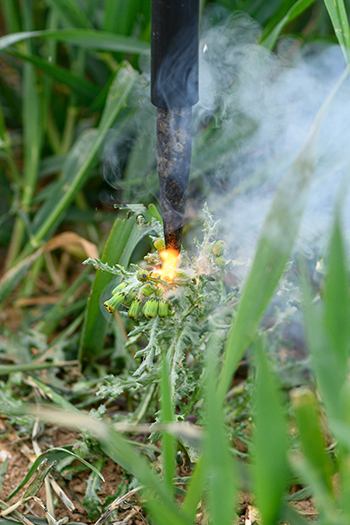 In practice, he says, continuous-contact weeding might involve a metal wheel running along a furrow, which acts as the earth, with the positive electrode in front of the wheel to touch the weed.

“A charge then flows from the positive probe, into the weed, down through the roots and back to an earthing wheel to complete the circuit.”

Following are a few examples of the electrical weeding technology under development. There are likely to be others not listed.

In 2015, Ben Kruger and his family from Missouri in the US purchased Weed Zapper technology to kill weeds on organic and conventional farms.

In a YouTube video, Mr Kruger says a weed contact bar and earth (in the form of a wheel to complete the electrical circuit) are mounted on the front of a tractor.

At the rear of the tractor is a belt-driven, industrial-sized generator connected to the tractor’s power take-off.

When the contact bar touches a weed above the canopy of a crop, an electrical charge travels through the plant and back to the earthing wheel.

He says grass weeds require three passes of the machine for effective control because grasses treated once tend to regrow.

In a YouTube video, Small Robot Company chief executive officer Ben Scott-Robinson says the ‘Tom’ robot travels across a paddock at 2.5 hectares an hour to scan, monitor and measure the location of every weed in relation to every wheat plant.

‘Tom’ then passes data to ‘Wilma’, an artificial intelligence processing system, which develops a weed map.

‘Wilma’ then passes the map to the ‘Dick’ robot, which goes into the paddock to find the individual weeds that ‘Tom’ has seen. When it finds the weeds, it kills them with electricity.

The technology uses a conductive liquid and electric power to desiccate potatoes before harvest.

The Nucrop website states a weed control solution will be developed this year.

“It probably carries a higher risk for off-target damage to crops than laser weeding, particularly if weeds are in the intra-row,” he says.

“Weed control using electrical weeding is likely to be slower than laser weeding because the electrode needs to move to contact the weeds.”

He says weed recognition research needs to advance before site-specific lasers and electrical weeding can be tested in Australian paddocks.

“Proof-of-concept work has been done to use technology to recognise annual ryegrass and turnip weed in wheat and chickpeas,” he says.

“Preliminary research shows annual ryegrass that appears similar to cereal crops is harder to distinguish than broadleaf weeds are in cereal crops.”

He says a large dataset of weed images is needed to train algorithms appropriately and improve the accuracy of the technology for distinguishing weeds from crops.

“By late post-emergence, hopefully, the weed density will be lower, allowing survivors to be targeted with site-specific and non-herbicidal control treatments from mid-tillering to anthesis,” he says.

Dr Walsh says further experiments are needed to determine how well weeds can be controlled using laser and electrical means.

“We need to continue evaluating the effectiveness of controlling a range of weed types at different sizes in preliminary pot trials,” he says.

“Autonomous platforms are available now and we will need to integrate laser and electrical weeding technologies with these systems when the time is right.”

The next significant steps, he says, are validating pot trial research results in preliminary field trials and gathering feedback from growers about how they see these technologies being used in their farming systems.

He speculates that growers may have a range of demands for the in-crop use of laser or electrical weed control tools. These could be an add-on to growers’ herbicide programs or replace herbicides altogether.

Microwave weeding works by heating water particles within the cells of weed plants. The resulting heating of cell contents causes the cells to break down, killing the plant. Research has shown that the technology is likely to be more suited to horticulture where microwave systems can move across fields at the required slow working speed to kill weeds.