Exotic pest a ‘miner’ issue for the grains industry?

Exotic pest a ‘miner’ issue for the grains industry?

The Department of Primary Industries and Regional Development also released a statement. At the time of these statements (21 July 2021) a final decision had not yet been made on the technical feasibility of eradication. The contingency plan for American serpentine leafminer (Liriomyza trifolii) is available.

Serpentine leafminers are a serious threat to crops that rely on the visual appearance of their foliage for market acceptance and can significantly impact yields for crops like potatoes, but are they a threat to grain crops?

Serpentine leafminer, Liriomyza huidobrensis, was detected for the first time in Australia late in 2020 in Western Sydney in New South Wales and the Fassifern Valley region of Queensland. It has since been reported more widely in both states.

Also known as pea leafminer, serpentine leafminer (SLM) are small flies belonging to the family ‘Agromyzidae.’ Adults are black with yellow markings, around 2 mm in length. Eggs are laid into the leaf surface, where larvae (small maggots) hatch and feed by tunnelling through plant tissue, commonly within the leaves and occasionally in legume pods. 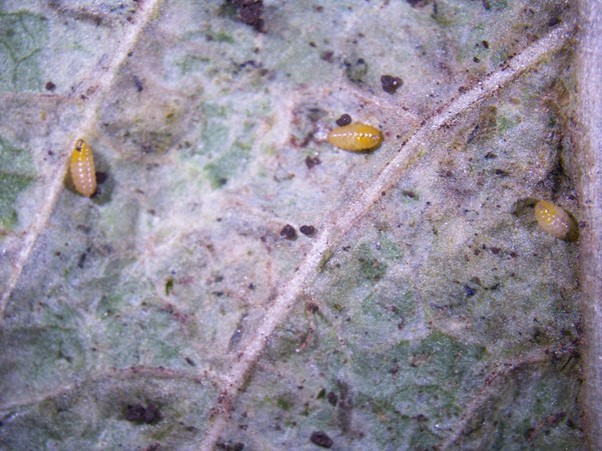 Serpentine leafminer pupae on outside of leaf. Photo: John D Duff Department of Agriculture and Fisheries

The larvae usually exit the leaf when mature to pupate in the soil. However, pupae can also be found sticking to the leaf surface. The entire life cycle can be completed in about 14 days in warmer weather.

Other leafminers in Australia

Serpentine leafminer is not the first of this family of leaf miners to be found in Australia. Liromyza sativae commonly known as the Vegetable leaf miner has also been detected on the western side of Cape York and in the Torres Strait Islands.

How are leafminers spread

Damage by larvae feeding on leaf tissue creates obvious ‘squiggly’ tunnels beneath the epidermis which results in thick white trails on the leaf where leaf mining has taken place. This tunnelling and feeding on leaf tissue reduce photosynthetic activity limiting growth by the plant and can lead to secondary infections. Seedlings and young plants can be severely impacted by leafminers. Feeding by the adult flies can also result in stippling on leaf surfaces which can cause secondary infections.

Reports of damage to grain crops by this pest overseas are generally limited to pulses, most commonly soybean and faba bean, however chickpea, cowpea, field pea, lima bean, navy bean, pigeon pea, and lupins may be impacted. Mungbeans and canola are considered at lesser risk as they are regarded as poor hosts of this pest. Cereals are not reported to be impacted by serpentine leafminer.

While this pest can feed and reproduce on many pulse crops, the damage reported has not usually been of economic consequence.

Queensland Department of Agriculture and Fisheries entomologist Hugh Brier recommended that provisional thresholds for pulse crops should be based on % leaf defoliation, as set for other leaf-feeding pests. As a rule of thumb, Hugh suggested that no yield is lost if defoliation remains below 33% in vegetative crops and 16% in pod filling crops.

However, if the cost of control and impacts on beneficial insects are factored in, the tolerable defoliation could be as high as 40% and 20% in vegetative and pod filling crops, respectively.

Always consider the impact of control options on beneficial organisms. There are a large number of beneficial parasitic wasps known to attack the leafminers and are themselves severely affected by most insecticides applied to crops.

Crop monitoring is the key to early detection for any new pest. To date in Australia, these “exotic” leafminers have not been detected in grain or pulse crops and if you find any leaf mining activity in a pulse, cotton or grain crop you should report it so that the pest can be properly identified, and any crop damage evaluated.