Crown rot resistance in bread wheat could be about to receive a boost with the importation of a wheat line containing a newly discovered resistance gene, Fhb7. The germplasm is being handled by the same CSIRO team, led by Dr Chunji Liu, that previously identified and combined four sources of crown rot resistance into Australian wheat cultivars.

Dr Liu says the latest source of resistance was identified in a wild relative (tall wheat grass). It was initially found to provide resistance to Fusarium head blight in Italy and subsequently found to be effective against crown rot caused by Fusarium pseudograminearum in Europe, the Americas and China.

The gene acts by detoxifying the toxins produced by Fusarium species during infection and is thought to originally come from a natural transfer of genetic material from endopyhtic fungi (symbiotic fungi that live inside the leaf) to the tall wheat grass.

Overseas researchers moved a fragment of DNA containing Fhb7 from the wild relative into Chinese Spring, a wheat line used universally as an intermediary for transfer into cultivated germplasm. The Chinese Spring lines are currently growing in Australian quarantine, where seed is being bulked-up and crosses set up to start transferring the resistance into Australian varieties.

“We are transferring the DNA fragment containing the Fhb7 gene into two varieties from each of the three growing regions,” Dr Liu says. “We aim to have material to test in time for the 2022 growing season. Our first goal is to assess how well the Fhb7 gene performs against crown rot isolates typically found under Australian growing conditions.”

Since the Fhb7 gene has been isolated, a perfect DNA marker exists that will help accelerate the gene’s transfer into the six Australian varieties.

However, Dr Liu stresses that the gene is contained within a large fragment of wild DNA. There is a risk that the additional DNA contains genes that have a deleterious impact on agronomy, yield, grain quality or even stress tolerance. That is a possibility that creates a need for careful assessments during multi-season, multi-environment field trials.

This proved the case with the four sources of crown rot resistance previously identified in CSIRO laboratories. Issues were detected around plant height and spike shape, although both have since been resolved with additional pre-breeding.

Once the Fhb7 gene has been analysed in isolation, Dr Liu next plans to combine it with the four existing sources of resistance that were discovered through previous investments by GRDC.

The best-performing of these four sources of crown rot resistance (located on chromosome 3B) has been available to wheat breeders since 2016 and should be close to delivery in commercial varieties. However, Dr Liu says that the level of protection provided is not perfect and additional benefits are possible by stacking resistance genes together. The same will apply to Fhb7. 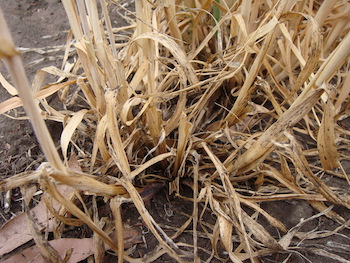 “We are not looking at an overnight fix, but it is important to note that the strategy we are using has managed to release lines containing combinations of crown rot resistance to breeders for the past two years,” Dr Liu says.

With no current effective chemical or biological controls for crown rot in wheat, the resistance genes represent an important opportunity to reduce yield losses. To that end, Dr Liu says the material already in the breeders’ pipeline produces levels of protection in field trials that are clearly visible to the naked eye.

Additionally, the CSIRO is funding work to isolate genes conferring crown rot resistance and to try and understand the underlying mechanisms. This work has the potential to open up further avenues for protecting crops against crown rot. Already a source of resistance has been isolated from barley and is informing efforts to further boost crown rot resistance in other crops, including wheat.

GRDC’s manager of wheat genetic technologies, Dr Pip Wilson, says the project to transfer the Fhb7 gene into Australian germplasm and assess how it performs under crown rot pressure in Australian conditions forms part of a $1.9 million, three-year investment by GRDC.

“Although some resistance sources are coming through breeders’ pipelines, additional resistance sources, such as gene Fhb7, are required to provide even-better resistance ratings and to give breeders more options based on different modes of action for resistance,” Dr Wilson says.

Looking ahead, Dr Liu says the name of the game now is to gain an understanding of which gene combinations provide the most consistent levels of protection in different environments.