Plant pathologists this year confronted an outbreak of two soybean diseases in the Burdekin region of Queensland - Target spot and Anthracnose - and the pest stem fly.
Photo: GRDC

The Toowoomba-based Queensland Department of Agriculture and Fisheries (DAF) pathologist is used to getting samples from growers and agronomists keen to discover or confirm what diseases they could have in their crops.

DAF staff regularly survey other crops, such as mungbeans, sorghum, barley and peanuts, for diseases as part of Ms Kelly's GRDC-funded project on surveillance and diagnostics.

This year was different 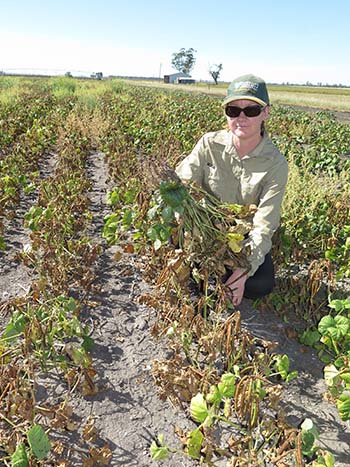 But by March, she had received samples from about 20 different crops.

"Many were not sure if the damage they were seeing was caused by a disease or not," she says.

"And, if it was, what the disease was.

"Growers had noticed that many plants had leaf lesions and - when plants had started producing pods - they started rapidly dropping leaves and dying.

"These symptoms seemed to occur quickly - over a two-week period.

"Growers and agronomists noticed these symptoms first, but there were also stem and pod lesions."

Heading out to investigate 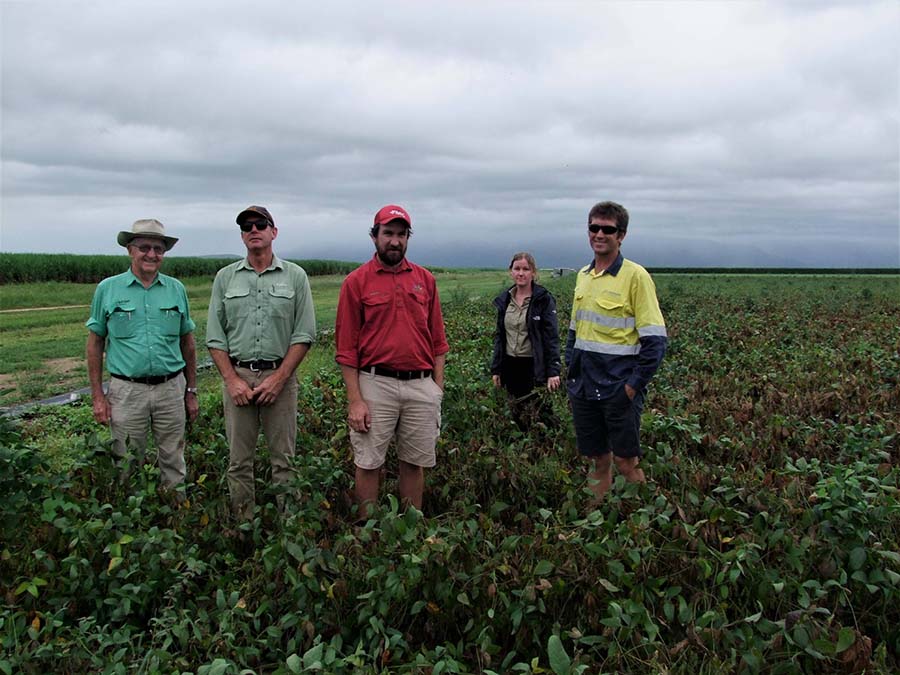 Queensland Department of Agriculture and Fisheries staff travelled to north Queensland to see what was occurring in soybean crops.

While soybeans are officially not part of Ms Kelly's GRDC plant disease surveillance project, she is always keen to provide plant pathology support.

Likewise, a major objective of the GRDC Northern Grains Integrated Pest Management project is to provide entomological support for all pulse crops.

A tour was soon organised to the Burdekin irrigation area, with the help of Neil Halpin - who is a DAF principal agronomist and coastal farming systems team leader and runs the GRDC Grower Solution Project for Coastal/Hinterland Queensland and the NSW North Coast project.

Ms Kelly says it was good to see first-hand what was happening in the paddock and confirm which diseases and pests were present.

She says, since early March, many Burdekin soybean growers had seen significant damage to their crops.

"Close inspection found many with soybean stem fly damage, as well as leaf spots, stem and pod lesions," she says.

In some crops, plants did not collapse until the late pod-fill stage, when pods were 80 to 90 per cent filled.

They still had serious quality issues, though, because seeds in disease-affected pods were discoloured and deformed.

Other crops collapsed when pods were only 25 to 30 per cent filled and, consequently, returns to these growers were even more reduced - due to much-lower yields and reduced seed quality.

By processing plant samples from affected sites, the two diseases detected in affected paddocks in the Burdekin were Target spot and Anthracnose.

Corynespora cassiicola, the causal agent of Target spot, was detected in the cultivar A6785.

For affected crops in the Burdekin, reddish-brown lesions appeared in the leaves in the lower canopy and eventually spread up the plant.

The leaf lesions were round to irregularly shaped and varied from small specks to larger lesions. A yellow halo surrounded the leaf lesions. Leaf defoliation occurred in plants heavily infected.

Lesions were also found on the petioles, stems and pods. Pod spots were typically circular. But with extended rainfall and high humidity, the spots may coalesce to cover the entire pod.

Ms Kelly says symptoms can develop at all stages of plant growth.

"Extended periods of rainfall, high humidity and warm temperatures are conducive for disease development," she says.

"The fungus can be soil-borne and may spread in the wind, rain and in infected seed."

Although Ms Kelly and her colleagues were called to the Burdekin to investigate, this pathogen was also subsequently detected in crops further south in the Bundaberg region.

Anthracnose in soybeans, caused primarily by Colletotrichum truncatum, was also detected in affected soybean crops across the region.

Affected pods may result in infected seed and will often produce fewer and smaller seeds.

Because pre-emergent and post-emergent damping off can occur when planting infected seeds, it is recommended that planting seed is not retained from affected crops.

Ms Kelly and Mr Brier also observed large levels of stem fly (Melanagromyza sojae) damage and were keen to see how, in combination with the diseases identified, it impacted on soybean health and growth.

In the Burdekin, soybean stem fly populations varied considerably in badly affected crops of the cultivar A6785.

"In one block with successive A6785 plantings side-by-side, stem fly damage was similar in both plantings," Ms Kelly says.

"But the disease symptoms were far more severe in the advanced plants.

"It makes it hard to ascertain how many of the plant deaths were due to the stem fly and how many due to disease."

Based on previous outbreaks, Ms Kelly and Mr Brier say it is unlikely that the level of stem fly activity observed led to premature leaf or plant deaths.

"The region was also confronting a major outbreak of Charcoal rot, with similar symptoms and levels of plant death seen in the Burdekin this season," she says.

"Supporting the argument that stem fly does not necessarily trigger sudden plant death was a more recent outbreak at Casino in 2018 - in cultivar A6785 , which is the same cultivar that was badly affected in the Burdekin.

"Despite the crop averaging four to six feeding tunnels and exit holes per plant, the crop matured naturally and there were no premature leaf/plant deaths."

Adding to this theory were observations from the Bundaberg region.

There, similar Target spot outbreaks and plant deaths were reported in A6785 this season.

Yet, little to only moderate stem fly activity was reported.

It is known that weather conditions across northern Queensland were conducive for the infection and spread of many fungal and bacterial pathogens.

Sudden plant death was mostly in A6785, while the later-maturing varieties Hayman(PBR) and Kuranda(PBR) had no or only slight symptoms.

"This may be due to A6785 being inherently more susceptible to these diseases, or because it was at a more stressful crop stage (mid to late pod-fill), at the period of peak temperatures and humidity, than Hayman (PBR) and Kuranda (PBR) - which were only at the pod-set or early pod-fill stages at this time," Ms Kelly says.

Ms Kelly says it is important to remember that these disease pathogens will survive between seasons in soils, infected crop debris and seed.

It is advised that growers should:

It is also important to note that there are currently no fungicides registered for soybeans to manage these diseases - and spraying crops after they collapse will not undo the damage.

"Spraying with unregistered pesticides can render the harvested seed unmarketable and can damage the reputation of the entire Australian soybean industry," Ms Kelly says.

However, in response to this disease outbreak, GRDC has supported industry by obtaining an emergency permit (PER89395) for the use of Veritas® fungicide.

It expires on 31 May, 2022, and is for use in soybeans against Anthracnose.

For stem fly outbreaks, Ms Kelly says it is important to remember that major outbreaks have been spasmodic.

"The pest is most likely present in most years in all regions, but with no noticeable plant symptoms.

Also, high numbers in one year does not mean they will automatically be high the next year.

In the 2013 Casino outbreak, high levels of stem fly parasitism were observed and the pest was a non-event in 2014."

This means program spraying can be problematic.

She says the incidence of stem fly in the tropics needs further study.

"Some consultants are already taking observations by cutting open stems," she says.

"The trapping of adults (sticky traps) would complement these records and might give an early warning of a bad outbreak."

Ms Kelly and Mr Brier also believe it would be beneficial for the soybean industry if follow-up monitoring on pests and diseases is done next season, building valuable grower and adviser experience on when and how these pest and disease complexes occur.