International testing to safeguard against the increasing risk of exotic cereal rusts.

Exotic wheat rust isolates are known to have entered Australia on 13 separate occasions since the University of Sydney's monitoring of rust pathogens began in 1921.

These are new rust pathogens, or new pathotypes of existing pathogens.

Concerningly, the rate of incursion of these exotic rusts is on the rise, yet - in most cases - we do not know where they came from or how they got here (Figure 1).

The most damaging rust epidemic was in 1973, and resulted from stem rust pathotypes first detected in Australia some 20 years earlier in 1954.

More recently, stripe rust epidemics from 2007-2011 resulted from an exotic incursion that was identified by the Australian Cereal Rust Control Program (ACRCP) in 2002.

These epidemics have a substantial impact on productivity and production costs. In 2008, $50 million of fungicides were used to control stripe rust in New South Wales and Queensland alone.

To increase our preparedness for future possible incursions, GRDC investment enables the ACRCP to test Australian cereal germplasm against exotic rusts at key locations around the world by working closely with colleagues at the International Centre for Improvement of Maize and Wheat (CIMMYT) Mexico.

We've examined the vulnerability of current cultivars, identified and characterised sources of resistance, and initiated pre-breeding to incorporate useful resistances into future cultivars. 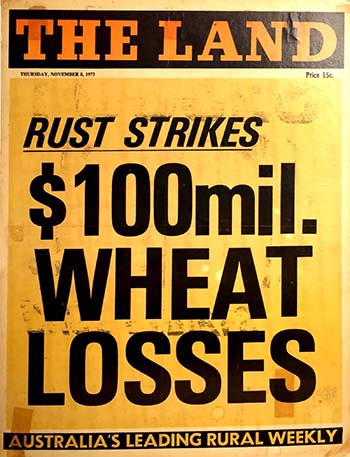 The 1973 stem rust epidemic in south-eastern Australia was caused by rust pathotypes derived from an exotic incursion first detected in 1954.
Photo: University of Sydney

There are two types of exotic rust threats to Australia:

In 2004, CIMMYT reported a new pathotype of durum wheat leaf rust, BBG/BN, which has the ability to attack many Mexican durum wheat varieties.

Recent field tests by CIMMYT of Australian durum wheat germplasm have revealed that many of our varieties are also highly susceptible to BBG/BN.

Another potential new pathotype, the wheat stem rust pathotype Ug99, overcomes many of the resistance genes that have been deployed to control stem rust.

It was first detected in Uganda in 1998 and has since spread to a number of other countries, including Egypt, Ethiopia, Kenya, Iran and Yemen.

Initial testing of Australian wheat cultivars in Kenya has shown that, fortunately, many carry effective resistance to this dangerous pathotype.

Importantly, this work has enabled the development of DNA markers for broadly effective resistance, providing breeders with the tools to select for this resistance without the need to directly screen all lines against pathotypes such as Ug99.

The exotic barley stripe rust has not been recorded in Australia, but it remains a significant exotic disease threat to our industry as CIMMYT's offshore testing has shown that many of our lines are susceptible to this rust.

We test Australian cereal germplasm against exotic rusts around the world to identify sources of resistance for future varieties. - University of Sydney Professor Robert Park

This research has also identified a range of barleys with reliable resistance, including Fathom (PBR), Granger (PBR), Yerong and Franklin.

Our current focus is to characterise the resistance in these and other barleys, and to develop resistance markers for breeders.

Already, we have identified two broadly effective resistance genes from Yerong and Franklin.

Offshore testing is a vital part of identifying sources of resistance for both local and exotic rusts that can be used in pre-emptive breeding to protect against future incursions.