There has been an increase in stripe rust infections across the north, which hasn’t surprised experts due to conducive conditions. Growers have been encouraged to implement early management.
Photo: GRDC

Experts are not surprised by increasing stripe rust reports in the northern grain growing region in recent weeks, with ongoing rain and the survival of a significant green bridge over summer generating conducive conditions for the disease to thrive.

Dr Simpfendorfer says across both NSW and Queensland, growers have been noticing high stripe rust occurrences in emerging crops, even reporting cases of low levels in resistant-moderately resistant (RMR) varieties like Lancer. 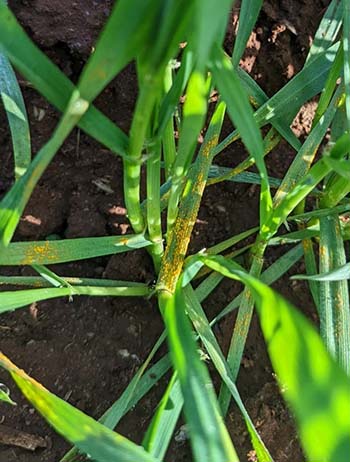 Growers should consider applying an early fungicide to manage seedling infections in later sown wheat crops as all varieties are susceptible at this stage. Photo: GRDC

“We’re seeing an early epidemic this season - growers wouldn’t usually be reporting infections this early on but the significant green bridge they experienced over summer has supported earlier inoculum development.

“This has meant there’s significantly more seedling infections this year, including in RMR (resistant/moderately resistant) varieties, but growers who selected more resistant varieties to help manage the disease shouldn’t be too alarmed.

“Growers should be proactive and consider applying an early fungicide to manage seedling infections in later sown wheat crops as all varieties are susceptible at this stage. But once resistant varieties establish more and their adult plant resistance genetics kick in, they’ll start to look after themselves.”

Dr Simpfendorfer says growers should be out in their paddocks assessing crops closely and making informed fungicide decisions to help manage the disease while crops are most vulnerable at early growth stages.

Globally, it is estimated that over five million tonnes of wheat are lost each year to stripe rust alone and GRDC has invested significantly in helping Australian growers identify the disease and manage it to prevent yield loss.

This season, Grain Orana Alliance (GOA) are conducting trials, supported by GRDC, to determine if they can serve as an early warning system for growers to help them indicate dominant stripe rust pathotypes in different cropping areas.

Because stripe rust has several pathotypes which can impact varieties differently, growers could be caught off guard by disease infection. For example, a wheat variety resistant to pathotype 198 could be highly susceptible to pathotype 239.

Mr Street says the GOA trials will assess a range of pure seed lines with known reactions to different pathotypes of stripe rust.

“The trials will be monitored regularly and if stripe rust occurs, we’ll be able to make an informed opinion on what pathotype is likely present, but we will also send samples away to the University of Sydney to confirm the pathotype. This information will help growers understand which other varieties may be at immediate risk of infection in an area, giving them a head start to implement a management strategy.”

Mr Street says these trials were developed in response to feedback from growers who were concerned about the turnaround between sending crop samples away to finding out what pathotypes were impacting their crops.

“We thought about how we could address the problem and generate an early warning system to help growers respond to the threat of stripe rust in conducive conditions,” he says.

The trial sites are located in Coolah, Tottenham, Wongarbon, Gilgandra, and Coonamble, all in central NSW.

GRDC Grower Relations Manager - North, Vicki Green says stripe rust is a huge concern for growers this season, so extending updated research and resources to help them mitigate risk has been a high priority for the organisation.

“We invest heavily in disease management at GRDC and this season, we’ve tried to make updated information as accessible as possible to growers,” she says.

“It’s great to see our industry partners respond to grower feedback and generate avenues to help them manage disease risk during the growing season and make more informed management decisions when it comes to varietal selection.”

Growers can keep an eye out for regular updates on Twitter - @GrainOrana or their website Grain Orana.