A new method that summarises statistical results in variety trials is helping to better understand the biological drivers behind yield.
Photo: Melanie Jenson

Refinements in the statistical modelling of variety trials will allow varieties to be compared more easily across environments. Essentially, the new method summarises results from the existing model, making use of the statistical ‘noise’ created by the way different varieties interact with their environment.

Lead researcher Alison Smith, a principal research fellow from the University of Wollongong, explains that providing meaningful and concise information in variety trials across multiple environments is a major challenge. This is because of the variety-by-environment interaction.

Variety predictions for individual trials are a ‘snapshot’ – a reflection of how a variety performed in the environmental conditions that occurred at that particular location and in that particular year.

“Although this historical and specific perspective may be of interest, breeders and growers are generally more concerned with variety performance across a range of environments. It means we require ‘meaningful summaries’ of variety predictions across environments in the dataset,” Dr Smith says.

Dr Smith and University of Wollongong senior professor Dr Brian Cullis have engineered a solution. It involves grouping environments that have minimal variety-by-environment interaction together. This is determined by analysing a particular dataset. 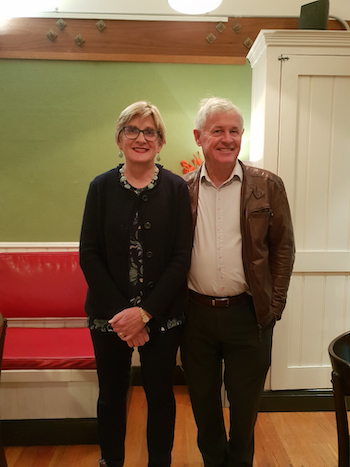 The University of Wollongong’s Dr Alison Smith and Professor Brian Cullis have created a way to compare varieties more easily across environments, helping breeders and growers drill down to the biological drivers of yield. Photo: Courtesy of Alison Smith

Called interaction classes, or iClasses, this allows breeders to select the best varieties within each iClass. And because it can identify patterns of variety-by-environment interaction, it also allows them to match varieties across iClasses.

“Australian growing environments are just so variable, and that’s part of the breeding challenge. In 2018 and 2019, parts of the northern region were in drought. In 2020 it had favourable conditions. Yet, we need to be able to compare genetic material across these environments. Being able to cluster environments through iClasses gives us the power to interpret what particular biology is driving yield.”

This creates more accurate selection decisions, she says. “We can focus the genetics to their optimal environments, which leads to improvements in genetic gain and, ultimately, better varieties for growers.”

Dr Hobson says that breeding trials produce a lot of data. For example, Stage 3 trials, where decisions are made on what material will make it through to variety selection, can include 50 trial sites from different environments and years.

“This new process looks at the data in a logical way, allowing me as a breeder to weigh up the pros and cons of breeding lines. With this system we are using more tools to investigate our massive datasets.”

She says being able to drill down on detail is vital as chickpea growers increasingly expect more sophisticated varieties.

“Twenty years ago, growers were satisfied with broad adaptation and just wanted one variety that would grow well everywhere. About five years ago, when the profitability of chickpeas rose, growers started asking about varieties that suited short or long seasons or certain soil types. It is an approach we can meet with investment in breeding and facilities and in statistical innovation like the iClass system.”

Dr Hobson is already using the iClass system in the CBA program. She supplies the University of Wollongong team with data and it provides her with different environmental classes. “With that information I may see a grouping and say – yes, they are the central Queensland trials, or they were the ones on heavy soils. This helps to better interpret our results.”

The work is the culmination of more than a decade of statistical research for Dr Smith and Professor Cullis. Dr Smith says the new system improves on what was already considered the gold standard of statistical analysis and takes it to a new level. The statistical upgrade has been tested against existing varieties with positive results.

Dr Smith says a wheat variety provided a good example of how meaningless it is to create an average ranking of variety yield in the presence of variety-by-environment interaction.

The iClass approach applied to a late-stage variety testing dataset revealed that the performance of a high-yielding wheat variety differed substantially between environments. It was a top and near-top-ranking variety in the two iClasses that contained the highest-yielding environments, but an average variety in other iClasses.

“The availability of this type of information for release decisions would be invaluable for breeders as it helps to minimise risk.”