To fill this gap, WA researchers led by Dr Michael Francki from the WA Department of Primary Industries and Regional Development (DPIRD), have screened the broader wheat gene pool and identified sources of genetic resistance to SNB. In the course of this work they have also acquired an understanding of the inherent nature of this resistance.

The newly discovered genetics predominantly take the form of numerous ‘minor’ resistance genes. These genes were transferred into Australian adapted cultivars, either singly or in combination of up to three genes, and the newly developed wheat germplasm has now undergone field testing in a range of environments and paddock conditions.

Dr Francki says the trial data has provided insights into how best to deploy the SNB resistance genes to achieve the maximum benefit.

“We were interested in SNB resistance that was effective under different environmental conditions experienced by WA growers,” he says.

“We could have tested for resistance genes in the glasshouse or our Perth nursery, but that’s not telling us the value of the resistance in production environments. Instead, we established field-based protocols that can identify broad-spectrum SNB resistance in the paddock.” 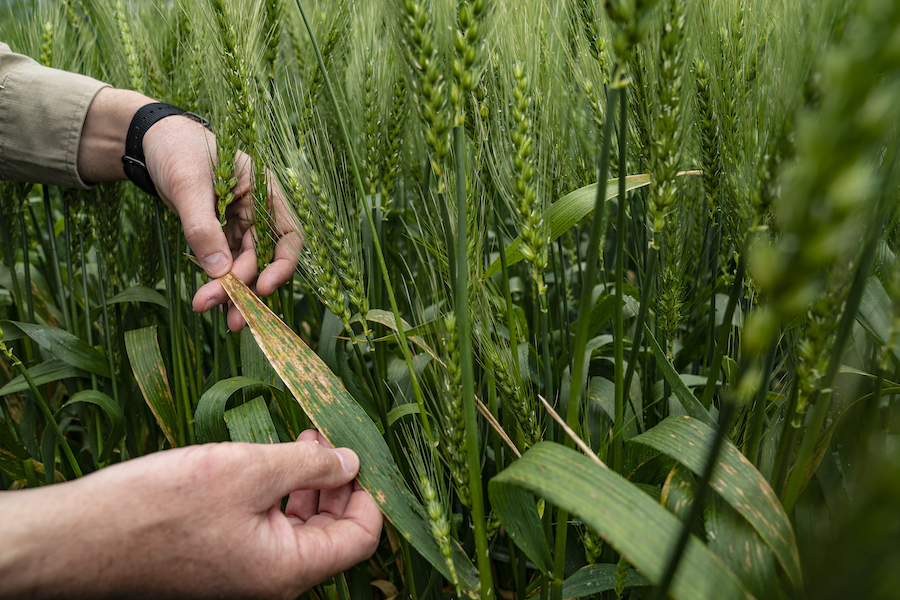 Septoria nodorum blotch (SNB), along with yellow spot, are the most important diseases of wheat in Western Australia. They are difficult to distinguish from each other, with both causing leaf spotting, but SNB also leads to a browning of glumes and nodes. Photo: Evan Collis

Central to this strategy was the ability to detect the potential for gene-by-environment (GxE) interactions, in which the performance of resistance genes could potentially vary under different regional and environmental conditions.

Understanding GxE interactions is at the cutting edge of pre-breeding studies as researchers tackle increasingly complex production challenges. The objective is to be able to account for, or model, a large number of interacting variables that affect crop performance in the paddock.

These variables encompass genetics, agronomic practices and climate. The complexity of these interactions can be why crops do not necessarily perform as expected in a particular paddock.

“And when it comes to disease resistance work, the number of variables affecting outcomes via GxE interactions in the paddock needs to be further extended to include genetically diverse pathogen populations,” Dr Francki says.

“Historically, we know isolates are genetically diverse and gene rearrangements that can influence disease progression change. But we don’t know whether such changes have increased or decreased in recent years. We need to know the genetic diversity of modern isolates and the environmental influence on their aggressiveness so that we can incorporate this information into breeding strategies that maintain longevity of new SNB-resistant varieties in the paddock.”

This paddock-centric approach and protocols has brought researchers to the point where they have enough information to deploy the best-performing gene combinations in resistant varieties with the least GxE influence.

Five different combinations of SNB resistance genes were tested by Dr Francki’s team. These were moved into a number of Australian adapted cultivars that included LRPB Scout and EGA Eagle Rock.

The new populations were then tested across multiple sites to identify gene combinations that offer the most consistent and robust forms of resistance in multiple environments.

It is an approach that generates larger and larger datasets – of the kind that are becoming central to new technologies to better handle GxE complexity in breeding programs. This includes drawing on artificial intelligence (AI) to manage the required analytical complexity.

He has also considered how best to get these genes into commercial breeding programs. While DNA markers are available, ultimately Dr Francki thinks field evaluation will continue to be necessary because the potential for GxE effects was still detected for some SNB gene combinations.

A gene’s environment includes other genes 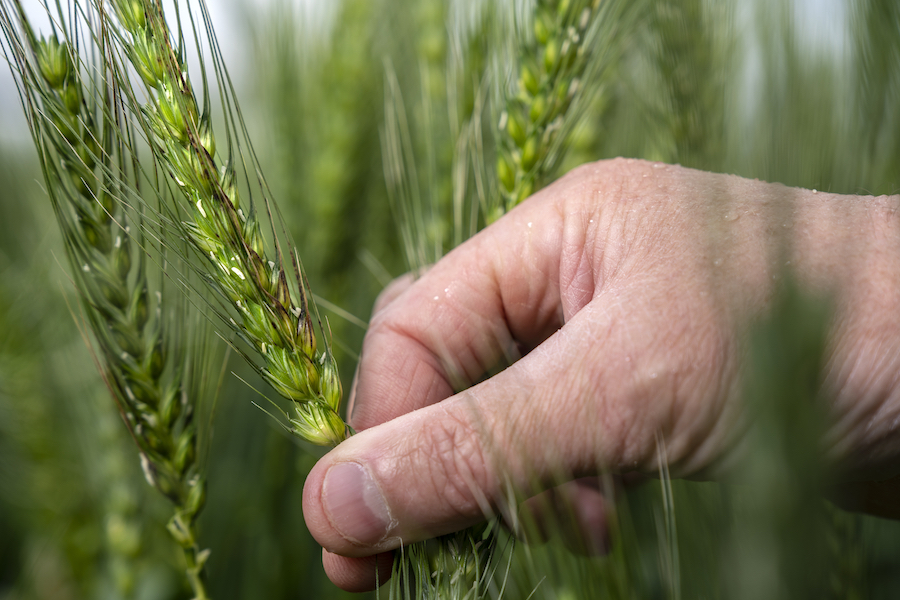 The pathogen causing septoria nodorum blotch in wheat is present in all growing areas in Australia but only causes significant economic losses in Western Australia. Favourable conditions for the pathogen occur in about 1 in 3 years. Photo:  Evan Collis

While gene combinations were identified that provide consistent SNB resistance across multiple environments, the project also delivered new findings in relation to GxE effects that have implications for breeding.

One discovery in particular stood out. This involved some of the original sources of resistance (the exotic donor line) that were not prone to GxE effects. In some cases, this robust form of resistance was found to change when put into Australian cultivars. This resulted in some Australian-adapted lines becoming more sensitive to environmental conditions with strong GxE effects.

“This is the kind of unpredictable outcome that is possible when many variables are interacting in complex ways and we certainly did not anticipate it,” Dr Francki says. “But it does tell us something interesting about these resistance genes.”

He thinks that in the donor lines, resistance genes had achieved an optimal synergy in relation to other genes within the donor genomes. By moving the resistance genes out of their adapted genetic background and into Australian cultivars, it seems the synergy was disrupted and, with it, the resilience of SNB resistance across different environments.

That raises the possibility that some of the SNB resistance relies on more genes to protect the plant than was initially thought. “So we anticipate there are unidentified genetic elements in some Australian germplasm that are having antagonistic effects on the identified genes controlling SNB resistance.”

As part of the project, the team at DPIRD and Murdoch University analysed the whole genome sequence of wheat to unravel the genetic source of fluctuating GxE effects.

“The idea is to identify which other genes kick in and out within the donor lines to maintain resistance when the plant faces different environmental conditions,” Dr Francki says. “So far we have identified four genes that behave in this way and they are forming the basis of a whole new hypothesis on how genes interact for this resistance trait.”

The four genes are now considered the tip of the iceberg in terms of the genetic diversity present within even closely related wheat lines. For example, the four genes that mediate GxE effects were not uniformly represented in the SNB-resistant donor or susceptible wheat lines, which indicates yet another level of genetic complexity.

“We are starting to see just how variable is the genome of even our modern wheat varieties, with lots of gene rearrangements that underlie crop performance differences.

“That’s why breeders – who use recurrent selection in field trials as a breeding strategy – get it right. They select based on performance across multiple environments rather than assuming the presence of a specific gene will ensure consistent expression of desirable traits.”

These are the kinds of breakthroughs in understanding that are needed to ensure future deployment of genetic resources is better able to account for both environmental and genetic background effects.