A suite of research is underway to address the grain quality defect late maturity alpha-amylase (LMA) and to accelerate genetic improvements in Australia’s high-value milling wheats.

In LMA-susceptible wheat varieties, the starch-digesting enzyme alpha-amylase can be prematurely activated. This causes otherwise normal-looking grain to fall below internationally accepted grain trade quality specifications for milling wheat – a baseline of 250, based on the Hagberg falling number test.

LMA causes a low falling number, often much lower than 250. Pre-harvest sprouted (PHS) grain produces similarly low numbers and both result in grain price downgrades of $20 to $50 a tonne. But the trigger for LMA occurs during grain fill, rather than once the grain has ripened, and it is caused by a different set of genetic and climatic factors.

Research into LMA and what triggers it has been underway for more than 20 years in Australia, much of it supported by GRDC investment. Australia has made good progress in managing LMA. However, LMA events still affect producers in the US and Europe, leading to significant market issues for producers of milling grain in these regions.

In Australia, research continues to lead developments in understanding and overcoming LMA. GRDC’s most recent supported research includes six projects that range from plant genetics to estimating LMA risk in the field and a new grain quality test that has the potential to supersede the current falling numbers test. These investments aim to maximise grower profits by minimising potential downgrades due to an LMA event while working to remove LMA as a genetic trait in Australian wheat.

At the University of Adelaide, Associate Professor Daryl Mares and his team have been investigating the specific genes that make a wheat variety either susceptible or resistant to LMA.

Dr Mares has worked on LMA for more than two decades, initially helping to identify it as an issue distinct from PHS. In collaboration with Dr Kolumbina Mrva, he developed testing protocols that determine the resistance varieties have and the related risk of grain damage. The result of this LMA test is a critical part of the information Wheat Quality Australia uses to classify every new variety.

In his most recent GRDC-invested project, Dr Mares and his team identified the gene associated with a major component of resistance and developed genetic markers for it (GRDC Code UOA1407-007RTX). They found nine different variations of the gene on chromosome 7B and developed high-throughput molecular markers specific for each of the gene variants.

This allowed for testing of a large panel of wheat varieties to explore possible links between particular variants and LMA risk.

What we see is risk increasing with earlier sowing dates and with early-to-medium maturing varieties.

Three variants appeared to confer “well-defined resistance”, Dr Mares says. Unfortunately, the number of lines with two of these variants is relatively small, but includes: group A – Chinese Spring wheat, some Western Australian noodle varieties such as Calingiri and Supreme , several sprouting resistant lines Dr Mares has developed, and group B – some Canadian varieties.

However, the third group, group C, contains a significant number of Australian varieties bred for boron tolerance, such as Halberd, Harper , LRPB Trojan and Scepter . In a stroke of good luck, breeding for boron tolerance has inadvertently also selected for LMA resistance.

Varieties with the other six genetic variants vary from resistant to susceptible. Dr Mares says even when the specific variations conferring resistance were absent, some lines still demonstrated resistance that is thought to be due to the accumulation of traits from other parts of the wheat genome (GRDC Code UOA1507-001RTX).

The DNA markers, genetic variations and the LMA-resistant plant lines have been provided to Australian breeders. Dr Mares is continuing research to clarify the impact of environmental factors on LMA, such as variation in temperature and moisture stress, and to locate additional genetic loci that confer resistance.

He is also investigating the actual mechanisms within the plant that initiate the LMA response. The genes related to LMA resistance, or susceptibility, are located in different positions on the wheat chromosome to the ones that actually generate the alpha-amylase. He says the key to understanding LMA is, therefore, a better understanding of the steps that link the resistance/susceptibility loci to the alpha-amylase genes.

These LMA enzyme-producing genes are the focus of Dr Jean-Philippe Ral’s work at the CSIRO (GRDC Code CSP1506-007RTX).

Dr Ral explains that wheat produces two main types of alpha-amylase enzyme; ‘type one’ correlates with LMA and a poor falling numbers result. There are 12 different genes related to the production of type one alpha-amylase spread across the three genomes that make up a wheat plant. Dr Ral’s aim, over the life of a six-year project, was to work out how to turn these genes off without drawing on gene modification technologies.

He and his team successfully created mutations that turned off 11 of the 12 genes. But they have also discovered that modifying just a few select genes will stop production of alpha-amylase in the case of LMA.

One of the risks of this approach was that deactivating the alpha-amylase genes might also reduce the energy available to the plants during germination. Alpha-amylase is one of the enzymes triggered in the sprouting process: “Finding the right combination of only a few genes that allows the inactivation of LMA without impacting germination has been important to the project,” Dr Ral says.

Testing so far shows no decrease in germination rates or time to emergence as a result of the modifications.

A provisional patent related to this work has been filed and discussions are underway with GRDC and plant breeders about the next steps needed to incorporate the new genetics into lines being bred for commercial development.

While work continues on genetic solutions, at the University of Adelaide, Associate Professor Bettina Berger and collaborators are working to accelerate the screening process that currently determines whether a new variety is sufficiently resistant to LMA to be classed as milling grade (GRDC Code UOA2007-003RTX).

On average, 700 new lines are screened for susceptibility to LMA each year, with a total of 4000 plants individually tracked, including replicates and control plants that provide a benchmark for tests. Plants raised in glasshouses are closely monitored for flowering and grain fill. At mid grain fill they are subjected to a cool shock, which triggers LMA in susceptible varieties.

“For the breeders there is a lot hanging on these tests, as they are critical to the classification of every commercial variety released,” Dr Berger says.

But the current test, while effective in identifying LMA susceptibility, is also an expensive bottleneck in the breeding process.

Due to limited capacity and expense, breeders only submit new lines for screening late in the breeding pipeline, as they approach commercial release. A much-cheaper screening process that could be done on 10 times as many plants would allow screening earlier in the breeding process and could help weed out problematic lines, Dr Berger says.

New trials are underway to streamline the controlled-environment tests to potentially reduce labour and other costs, with trials run across multiple environments and two seasons a year. The revised processes are also being compared with the results of LMA expression and falling number results from field trials.

There are 27 field sites in all major grain growing areas across Australia, coordinated by plant breeder Australian Grain Technologies, which is a partner in the project. The first field trials and controlled-environment trials began in 2020, with the final report expected mid-2023.

Dr Berger says the correlation of results from the new trials will assess whether the revised laboratory trials accurately reflect the risk of LMA occurring in field conditions. The SAGI node is providing critical statistical analysis for the project, which will also feed into concurrent research at the Queensland Alliance for Agriculture and Food Innovation (QAAFI).

Dr Robert Armstrong and Dr Andries Potgieter are leading a national, multidisciplinary team of researchers and plant breeders in a project (GRDC Code UOQ2001-005RTX) to predict both environmental and genetic factors (where possible) that are most likely to trigger LMA on-farm.

Dr Potgieter says in a previous project, enormous long-term datasets from weather stations across the Australian wheatbelt were fed into a biophysical crop model to simulate plant growth and detect weather events likely to trigger LMA in susceptible genotypes during grain development (Figure 1).

Figure 1: Risk footprint map for cool-shock temperatures equivalent to official cool-shock LMA testing protocols in the field, during the grain fill window. This is based on 1 May sowing date each year and a quick-maturing wheat variety, simulated using daily weather data from 1901 to 2016. Pie charts indicate percentage of land-use area associated with the broad risk classes. The major focus of the current project, which began in 2020, is validation of that LMA field incidence model. It will also determine the range of temperature conditions that may trigger LMA in the field. Once validated, it can then be used to produce maps that depict the level of LMA risk to wheat crops at the shire scale.

The initial maps generated in developing the model showed the risk of experiencing a specific set of temperature conditions likely to trigger LMA in susceptible varieties. These showed higher levels of risk in clusters along a narrow band of shires across the southern region of Australia. The remainder of the southern region showed more moderate risk levels in bands.

“That’s because flowering and, more importantly, the grain-filling period, is more likely to coincide with cooler conditions.”

The new project is also drilling down further to better understand risks at the paddock scale and the way genes and environment interact to damage grain quality: “We know that out in the field, temperature is not the only trigger controlling LMA,” Dr Potgieter says. “This new project will allow us to get down to the field scale (and) expand our knowledge of the LMA triggers.”

In other research, Dr Matthew Hayden and Dr Joe Panozzo at Agriculture Victoria are using near-infrared (NIR) spectroscopy and NIR-hyperspectral imaging to assess the cause and extent of starch-related grain damage caused by alpha-amylase activity (GRDC Code DJP2001-009RTX). 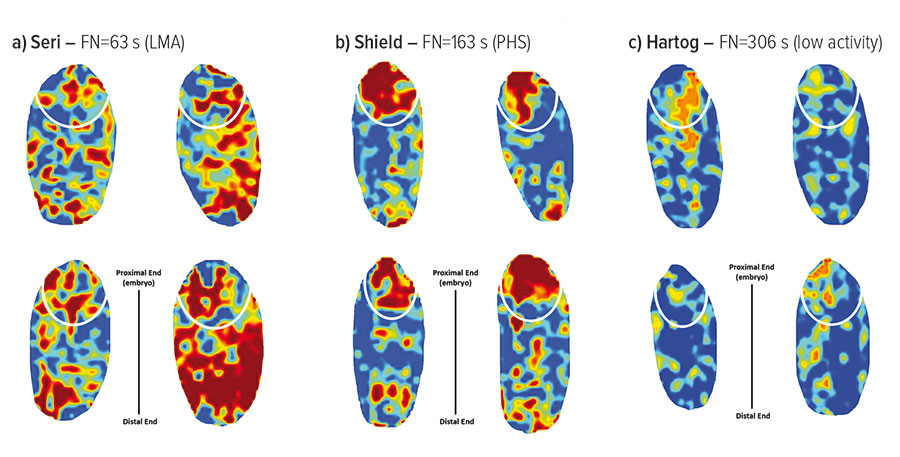 Halfway into the three-year project, Dr Hayden’s team has achieved proof of concept and is now building the reference library for what is essentially a prediction model that first identifies the presence or absence of alpha-amylase activity, then quantifies how much there is, and finally determines the cause.

Their new approach has potential to become the next-generation industry standard for grain starch quality testing. It can be applied to bulk samples, as well as to a single grain.

Used on-farm, it could allow growers to be aware of elevated alpha-amylase activity, which is not visible in non-sprouted grain, and to consider management options such as blending grain prior to delivery or potentially segregating grain from affected areas.

“The test itself is a high-throughput test, currently as fast as a falling numbers test. In principle, the technology should fit into existing instrumentation that people across the supply chain already have. Headers,  for example, already measure protein as  grain is harvested. We would just be adding the ability to identify starch damage to that,”  Dr Hayden says.