A five-year push to innovate wheat breeding tools and germplasm diversity is coming to an end with the expiry of a dedicated research hub – the Australian Research Council (ARC) Industrial Transformation Research Hub for Genetic Diversity and Molecular Breeding for Wheat in a Hot and Dry Climate.

The hub’s industry focus saw important goals achieved, with the initiative also generating momentum for ongoing impacts through an expanding network of national and international collaborations and industry partnerships.

The hub’s exiting director, Associate Professor Stuart Roy, says the focus was on taking cutting-edge innovations from the research space and translating them to meet the needs of wheat breeders. The work spanned wheat-relevant applications from genomics and phenotyping all the way through to drone technology and image analysis.

This work allows an influx of novel genetics into the Australian gene pool, especially with regards to traits for which there is currently too little diversity.

“We wanted to make the whole process of targeting, screening and selecting beneficial new wheat traits simpler, less wasteful and better-integrated to commercial breeding pipelines,” Professor Roy says. “So, while the hub was very much a centre for doing research, its outlook was applied. Researchers worked closely with industry.”

“The combination of people from universities and industry meant that we benefited from bringing together different strengths, capabilities and perspectives,” Professor Roy says. “That integration was woven throughout hub activities, including the supervision and mentoring of PhD students.”

Led by Dr Penny Tricker, this theme’s focus was to find new physiological signatures of environmental stress responses and to detect genetic variation within wheat lines with enhanced stress resilience.

“As well as passing on known and newly discovered genetics, we wanted to give breeders better information on when and how to look for tolerance, so we also used new tools for phenotyping these difficult traits,” Dr Tricker says.

Notable success was achieved using a new imaging device – an X-ray CT scanner. It works by combining multiple X-ray measurements taken from different angles to produce three-dimensional, cross-sectional images of wheat heads. These images are processed by algorithms developed by the hub’s collaborators at the Fraunhofer Development Center for X-ray Technology in Fürth, Germany.

This development work has found ongoing applications, with GRDC investing in the purchase of an X-ray CT scanner to be housed at the Plant Accelerator at the University of Adelaide’s Waite Campus. This instrument creates a new phenotyping platform for stress tolerance discovery work for both above and below-ground wheat traits.

In a program led by Dr Melissa Garcia, wheat germplasm sourced from around the world was crossed into two Australian cultivars to generate a new Nested Association Mapping (NAM) population. This population has delivered to industry a broadened wheat gene pool within an Australian-adapted genetic background.

The NAM population has undergone field evaluation by breeders at sites in SA, Western Australia and New South Wales over several years. It also attracted interest internationally, with the lines grown in the UK and India.

Led by Dr Ramesh Raja Segaran, this research theme focused on drone-based ways to capture data from field trial plots alongside the development of algorithms to process the images in ways that are meaningful to breeding programs. 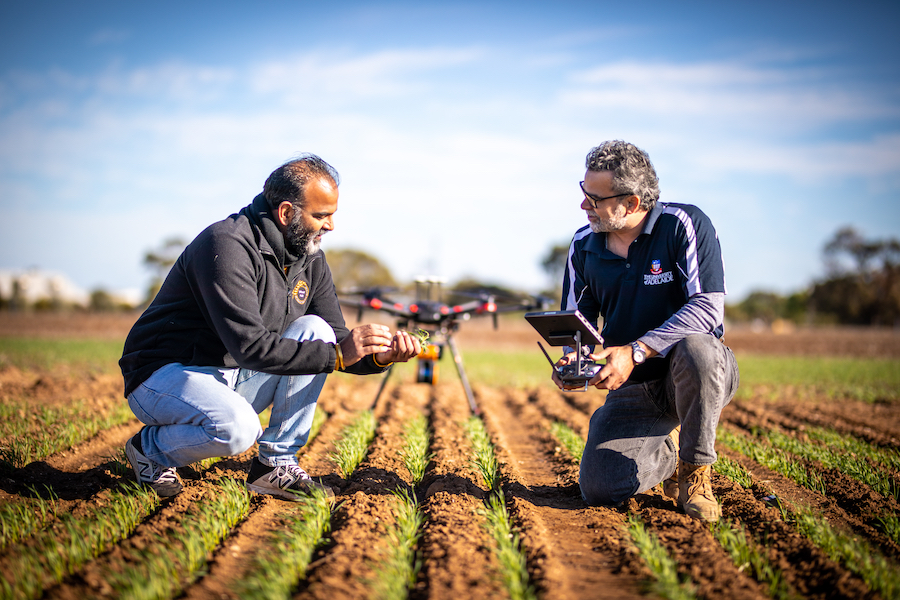 This involved working with an industry partner to use readily available, off-the-shelf drone technology. Methods were then developed to allow for consistent flight patterns that are needed for comparisons of trial plots over time.

The use of hyperspectral cameras meant that data spanned the visible and infra-red spectrum, generating a mass of data. The hub researchers ensured that the capacity was created to extract valuable information without getting bogged down by the size of the datasets. This involved image analysis techniques to create algorithms that can score breeding lines for a range of important characteristics including establishment, plant growth or to count grain heads.

“We wanted to take drone and imaging technology from a promising research tool to a platform capable of routine and targeted plot analysis while creating the basis for ongoing development of algorithms,” Professor Roy says.

4. Linkage of yield and grain nitrogen

Led by Dr Mamoru Okamoto, this research theme translated knowledge of how wheat takes up, stores and mobilises nitrogen. The researchers were able to understand the genetic linkage that causes a common industry problem: the association of higher yields with grain that contains lower protein content.

This involved working through physiological, molecular and genetic modes of analysis to ultimately identify the linked genes, develop DNA markers and devise ways to break the link.

That knowledge has now been adopted by industry and is being used to develop breeding material capable of both high yields and high grain protein content.

Led by Dr Ute Baumann, this research theme developed tools to open up the use of information about the wheat genome to capture the existing diversity of Australia’s wheat breeding gene pool.

Among the outputs is a bioinformatics tool called the Diversity Among Wheat Genomes program, used to visualise wheat’s large and complex genome specifically around data important to Australian wheat breeding. 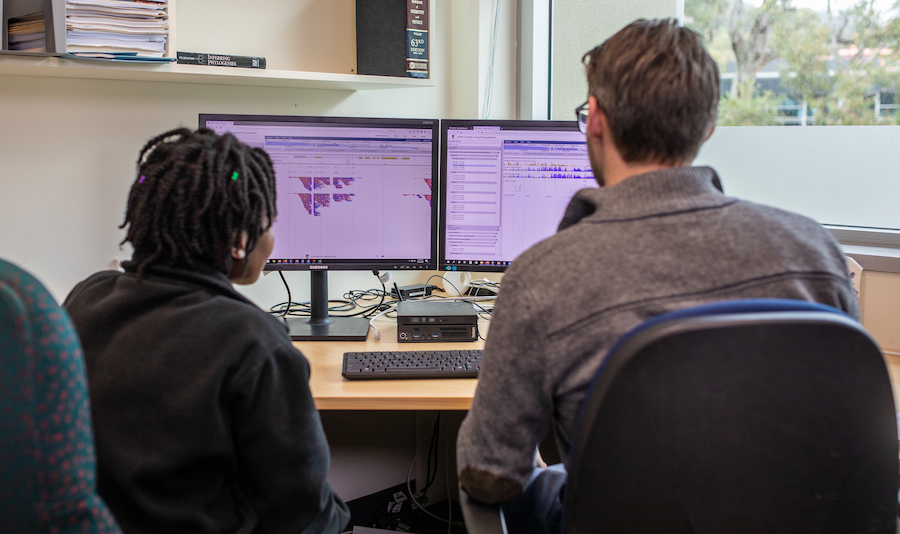 The backbone is provided by the sequenced wheat reference genome. To this backbone are pinned divergent sequences identified in Australian cultivars. This creates a bird’s-eye view of genomic regions where diversity is abundant and where it is lacking.

Adding data from the exotic wheats in the NAM population means that these differences in chromosome regions can be identified and researchers can find new genetic markers associated with traits of interest.

Besides utilising existing wheat science to develop important new wheat breeding tools, Professor Roy says the hub also fostered collaborations that will continue to roll out gains for years to come. These include:

“This material is being grown at multiple sites by breeders, and their ability to screen this material and explore its genetics has been enhanced.”