Hopes have been raised that the discovery and application of a gene for waterlogging tolerance will plug a $23 million leak for high-rainfall zone (HRZ) barley producers.

For most barley growers in high rainfall areas, waterlogging occurs, on average, one in every five seasons, reducing yields by about 20 per cent. Barley is cropped across about 660,000 hectares in the HRZ.

The discovery of a gene enabling barley plants to tolerate saturated anaerobic soils - for a much longer period and recover more rapidly once the soil drains - shows potential to restore these losses.

The gene was identified through an Australian Research Council (ARC) linkage project, as well as GRDC-invested research over the past 15 years.

Cereal pre-breeder Professor Meixue Zhou, from the Tasmanian Institute of Agriculture (TIA), leads the current GRDC-invested project, which is running from 2019 to 2022.

Professor Zhou says trials show that adding the waterlogging-tolerance gene into the malting barley variety Macquarie delivered an extra 20 per cent grain yield, equivalent to one to two tonnes per hectare, in waterlogged conditions.

The project aims to validate these results under field conditions in the southern and western growing regions. 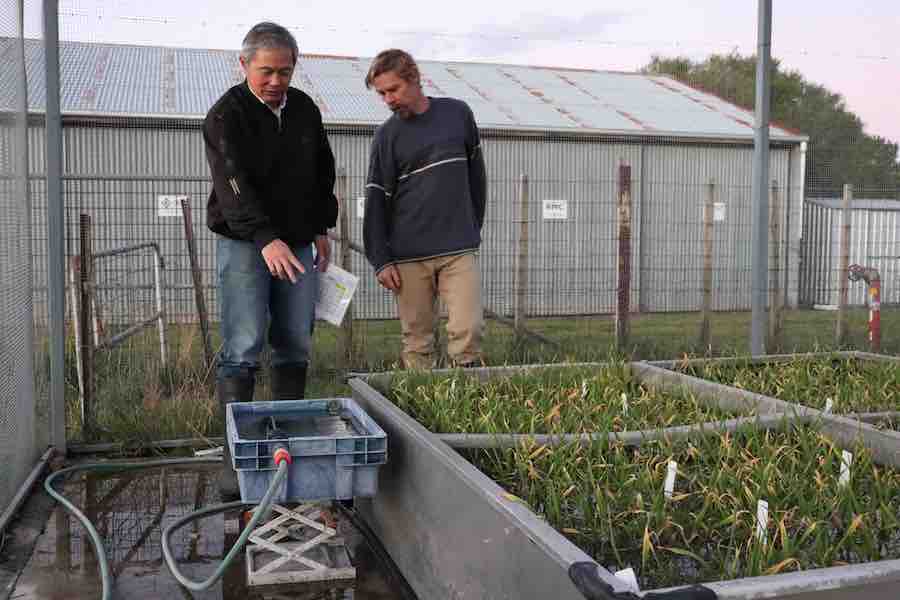 If results are promising, Professor Zhou believes commercial barley varieties containing this new gene could be available to HRZ growers in the next three years.

The new gene conferring waterlogging tolerance is being introgressed into the commercial barley variety RGT Planet, and potentially future variety releases, through a new agreement between the University of Tasmania and private breeding company Seed Force.

“The aim is for the new variety to perform the same as RGT Planet under non-waterlogged conditions with no yield or quality penalty, while performing much better under waterlogging stress,” Professor Zhou says.

It is hoped the gene will also be added to the genetic profile of waterlogging-susceptible cultivars when it becomes more widely available to other private plant breeding companies in the future, he says.

Addition of the gene influencing waterlogging tolerance into current commercial barley varieties could provide major yield benefits for growers in the high-rainfall zones of Australia.

"It could also provide yield benefits for growers in medium-rainfall zones where waterlogging can still occur, though it is less frequent.

Professor Zhou says the ability to adopt varieties containing the gene would be a cost-effective, accessible option for on-farm waterlogging management, especially if there is little or no yield or quality penalty in well drained soil conditions.

“Genetic solutions, particularly development of tolerant varieties, are possibly the cheapest way of reducing waterlogging damage and provide an option that is accessible for all growers.”

Professor Zhou says the gene discovered in a wild-type barley line confers waterlogging tolerance through an “amazing mechanism” that alters tissue in plant roots when the soil becomes saturated and oxygen levels subside.

“The gene allows barley to develop aerenchyma tissue in its roots under waterlogged conditions, which acts like a snorkel, supplying oxygen to the plant roots.”

Aerenchyma is a spongy tissue with large air spaces or channels in the roots, stems and leaves of some plants. These air-filled cavities facilitate the transport of oxygen from above-ground shoots to submerged roots.

TIA researchers now aim to combine the major gene identified for aerenchyma formation in roots with a secondary barley gene linked to another plant mechanism for waterlogging tolerance.

This additional gene confers tolerance to secondary metabolites produced in waterlogged conditions, including ion toxicity (particularly iron and manganese toxicity), which is hostile to plant growth.

To date, scientists have detected the quantitative trait locus, or section of DNA linked to the genetic trait. But its specific genetic marker within this section is yet to be identified for selection in pre-breeding programs.

Based on the current rate of fine genetic mapping, Professor Zhou predicts the marker for this gene will be pinpointed by 2022 enabling rapid selection of the gene in breeding programs. Next steps in the research will see researchers examine the effects of the new gene for aerenchyma formation on barley malting quality when trials are harvested this season.

Highlighting this, including applied research expertise and experience, are two PhD students and a postdoctoral research fellow appointed as part of the study, which runs until 2022.

Professor Zhou says the GRDC-invested student and postdoctoral positions have contributed to an overall lift in the four-year study’s outputs.

This “crucial contribution” extends to the project’s research findings, as well as its operational efficiency, he says. Advancing crop agronomy and modelling, PhD student Ke Liu examined the effects of the new gene for waterlogging tolerance when it was added to the Macquarie malting barley variety.

Through analysis of TIA trials, Mr Liu determined that the new gene could improve plant growth and lift yields by 20 per cent in waterlogged soils.

He also evaluated the yield losses that waterlogging can cause in trials comparing four malting barley varieties: RGT Planet, Westminster and Macquarie (with and without the addition of the gene for waterlogging tolerance).

Mr Liu found that waterlogging resulted in yield losses exceeding the conservative estimate of 20 per cent, with up to 50 per cent losses in the RGT Planet and Westminster cultivars.

As part of the trials, the varieties were exposed to waterlogging at different stages of crop development and for different durations: one month from the 2.5-leaf growth stage (GS), two months from 2.5-leaf GS, and two months from five-leaf GS.

Mr Liu’s analysis of the trial results showed the yield losses associated with waterlogging were mainly due to reduced tiller numbers. Reduced grain numbers per flower spike also contributed to the losses, but seed size was not significantly impacted by the waterlogging stress.

In another GRDC-supported role, PhD student S.M. Nuruzzaman Manik has drawn on his background in molecular biology to explore the barley genome as part of the study.

Fine-mapping the new gene for waterlogging tolerance in a wild barley accession, Mr Manik identified three candidate genes that confer the trait for aerenchyma formation in roots under waterlogging conditions.

He is continuing to examine the DNA section (quantitative trait locus) where the markers are located with the aim of pinpointing the optimal marker linked to the aerenchyma trait for use in plant breeding programs.

Mr Manik is also fine-mapping a different section of DNA, known to contain markers for the barley gene that confers tolerance to the toxic secondary metabolites that are produced when soils become waterlogged.

A new recruit to the TIA research team, Chenchen Zhao, joined the study as postdoctoral researcher in January.

In this role, Dr Zhao supervises all operations for the project, from its laboratory components investigating molecular biology and plant physiology to a sophisticated system for running waterlogging trials in the field. 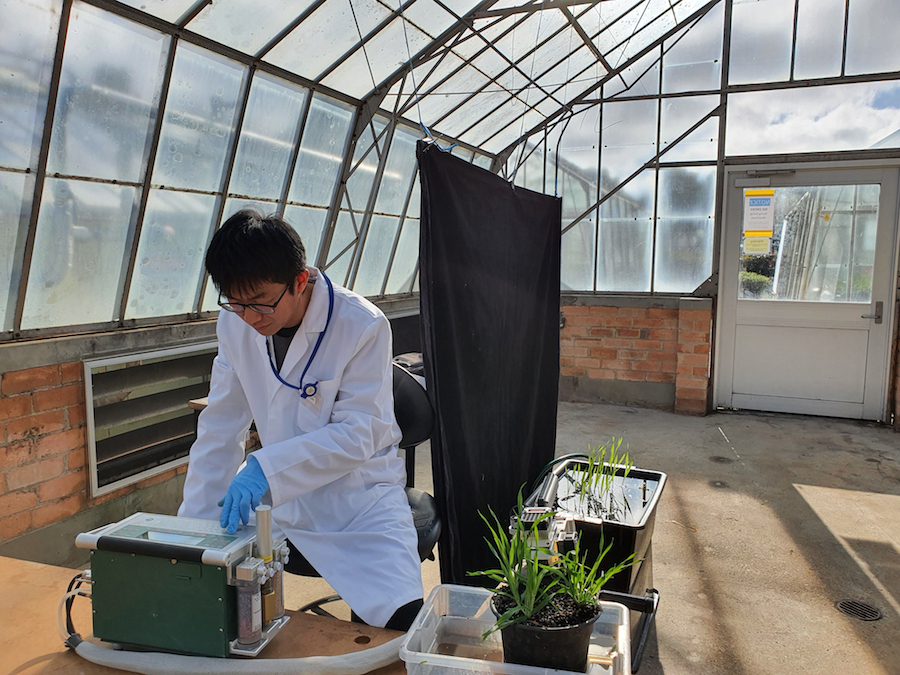 Professor Zhou and Dr Peter Johnson have led the development of two novel trial sites that allow researchers to recreate the effects of waterlogging at the University of Tasmania in Launceston.

"The ability to create consistently saturated, anaerobic soils, with low variation in trials, is vital to the trial program,” Dr Johnson says.

This is because waterlogging often occurs sporadically in paddocks, and cannot be relied on to provide consistent conditions for experiments each year, he says.

“Waterlogging naturally occurs maybe once every five years, and it is often highly variable in its severity."

"We can finely control the water level inside these tanks, so they can be fully drained or waterlogged independently of each other,” Dr Johnson says.

In contrast, a larger trial site, developed in two stages during 2014 (400 square metres) and 2019 (900m2), uses a different approach to recreate waterlogging in the field.

"At these sites, a system similar to paddock mole drainage is used to supply water to the soil.

"The site is maintained with tractor-mounted equipment and requires laser levelling before sowing to recreate consistent waterlogging,” he says.

In both systems, the ability to accurately control the level and duration of waterlogging is critical to provide consistent treatments for the experimentation. 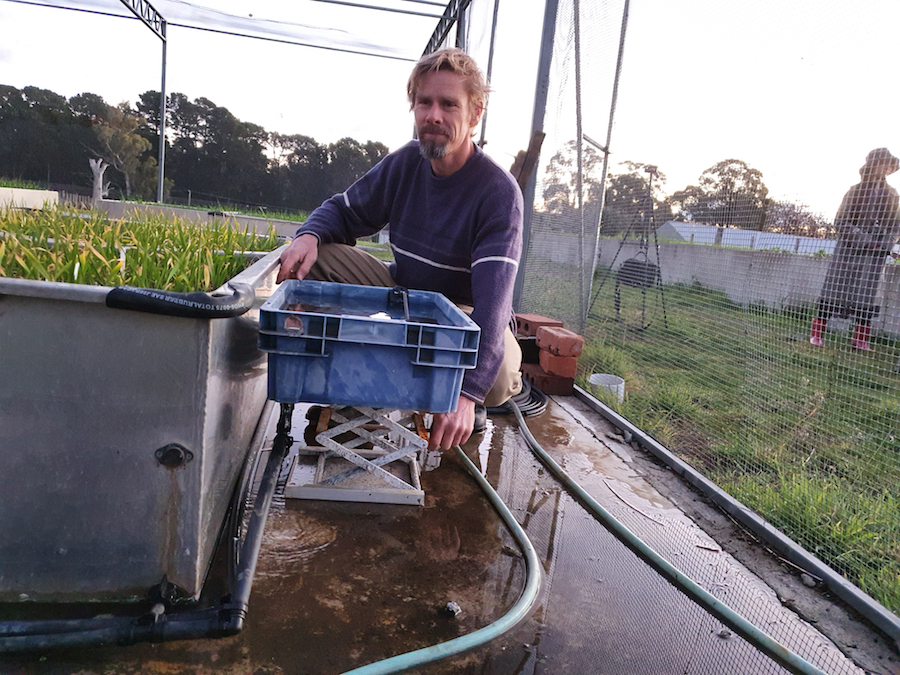