An indication of the different flowering times in the trials at the Boorowa, NSW, site in 2019.
Photo: CSIRO

Getting to know canola much, much better

An ambitious pre-breeding project is underway to provide the foundation for a future-resilient and highly productive Australian canola industry. Over 3.5 years, researchers are cataloguing genetic and genomic data on Australian and globally important canola varieties and combining it with information on variety behaviour – most importantly, time of flowering – in varied environments to understand flowering behaviour of canola in response to the environment.

On completion, industry will be able to optimise existing canola growing practices by enabling growers to better select varieties to target the optimum flowering window in different environments, or guide development of new varieties, based on genetic/genomic knowledge.

GRDC pulses and oilseeds manager Dr Francis Ogbonnaya says the project was driven by industry demand for genetic knowledge on phenological traits to allow growers to mitigate risk by selecting varieties based on flowering period to avoid environmentally driven yield impacts such as frost or extreme heat.

“The need for this information was identified by the earlier GRDC-invested  ‘Optimised canola profitability’ project, which found far more information on phenology was needed,” Dr Ogbonnaya says. The project identified a key to growing canola profitably was being able to match variety phenology with sowing date to ensure flowering starts close to the optimum start of flowering (OSF) to minimise stress and maximise yield.

“Canola is a relatively new crop in Australia. Compare it to wheat, which has been grown for 200 years. We know a great deal more about matching the optimal wheat variety to any environment anywhere in the world.

“We looked at what supported the widespread profitable growing of wheat to see what research needed to take place for the same to happen for canola and having exactly this knowledge will support a strong industry.” 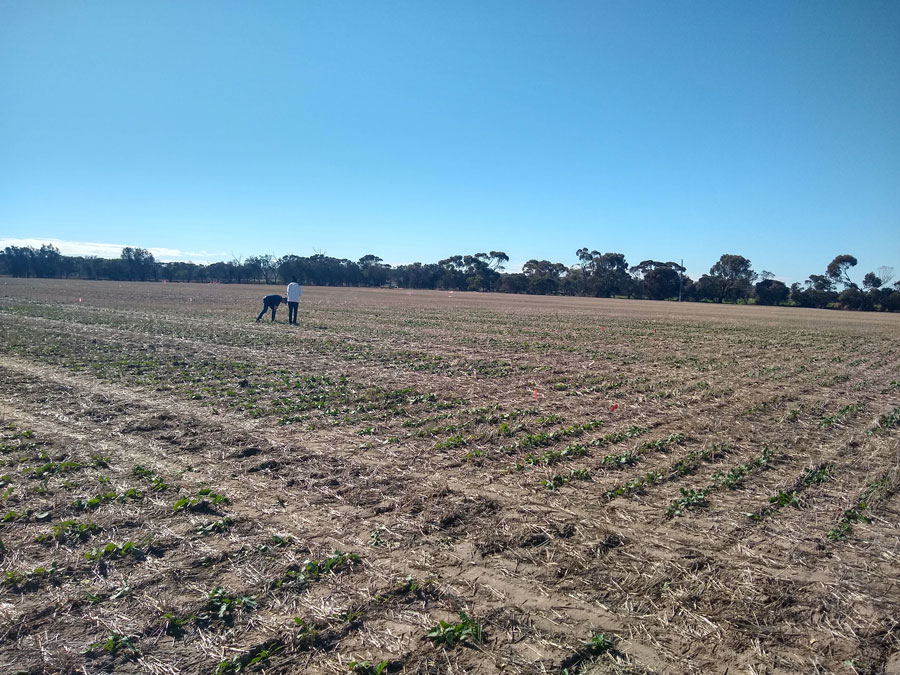 Rows of canola trials at the Beverley, WA, site in June 2020.

Dr Julianne Lilley, CSIRO team leader of integrated agricultural modelling and decisions, is one member of the team working on this project after previously working on agronomic canola research projects, including the ‘Optimised canola profitability’ project. The earlier projects highlighted the need for more in-depth knowledge of phenology (or the rate a variety moves through the life cycle from sowing to maturity).

“With wider sowing windows, partly in response to climate change, and new agronomic practices (such as growing dual-purpose canola), growers need more information on how varieties will perform in these new conditions,” Dr Lilley says.

“They need to know what is the optimum sowing time to achieve the optimum flowering window.”

Having access to genetic data and the genotypic responses of varieties will provide the platform for modelling performance of varieties in various scenarios. This could shorten the breeding pipeline by reducing the reliance on field trials and offer breeders the chance to respond faster to changing climate and environmental scenarios.

The project was designed to identify the full range of genetic diversity within canola varieties and preliminary data indicates there is substantial genetic variation for flowering behaviour.

“It is geneticists working with crop physiologists and agronomic researchers to find the information the industry needs, rather than just delivering a whole set of data which wasn’t designed to fill any gap,” Dr Dillon says.

“We’ve been dreaming of this sort of project for about five years, but I think if it had started earlier, it would have been harder to do. But now we can harness analytical techniques which we didn’t have access to before,” Dr Lilley says.

The project’s first year involved setting up the trials and collecting a large volume of data. It now moves into crunching the genomic single nucleotide polymorphism (SNP) and transcriptome data to produce robust information on phenological traits.

“We are exploring the use of ’omic data types to estimate phenology parameters for simulation or process modelling of variety response to environmental variables such as temperature,” Dr Lilley says.

“If this is successful, the data could be utilised to determine phenology parameters augmenting or replacing resource and time-costly field assessments.” CSIRO’s Brett Cocks assessing phenology in the Gatton TOS1 (time of sowing one) trial site with more than 700 plots. The pink markers indicate the start of the next variety.

CSIRO senior principal research scientist and project leader Dr Chris Helliwell says the project findings will be just as useful to growers and their advisers as it will be to breeders.

“It will help them identify exactly what variety will perform the best in their environment (or you could say in their paddock, or on their farm). It will also help them better understand the varieties they are growing now – canola breeding companies have a lot of hybrids, so we will be able to see the range of genes occurring across canola,” he says.

“Breeders put an enormous amount of energy into breeding for disease and herbicide resistance, but for growers that is just part of the picture and they also want varieties which will fit other aspects of their farming system and produce higher yields.”

Where in the world?

SNP data generated from the 90K array on 348 varieties through this project indicates genetic structure roughly reflects the geographic origin of varieties. There are more than 600 varieties of canola in existence, and the project is focusing on more than half of those – with about 50 per cent being Australian varieties and the remainder from around the world.

Multidimensional scaling (MDS) was performed on genetic distance between varieties and this suggested four primary clusters of genetic relatedness including: