Soon after completing his PhD, Greg Rebetzke did a road trip along the western fringes of the New South Wales wheatbelt – out where grain growers overcome the heat and dry in their battle to coax crops to life.

It was a journey that would determine his career direction.

Inspired by the tenacity of those working in sun-scorched paddocks, he mapped out a goal: he wanted to use science to help solve their farming challenges.

It was an ambitious plan for a postdoctoral student, but 25 years later Dr Rebetzke is a Chief Research Scientist with CSIRO Agriculture and Food and a leading research geneticist in wheat breeding.

“Growers have and will continue to inspire me. It is their questions that send me searching for answers, and which keep me excited about my work,” he says.

It is an enduring commitment to seeking solutions that has earnt this experienced researcher the coveted GRDC 2021 Recognising and Rewarding Excellence Award. 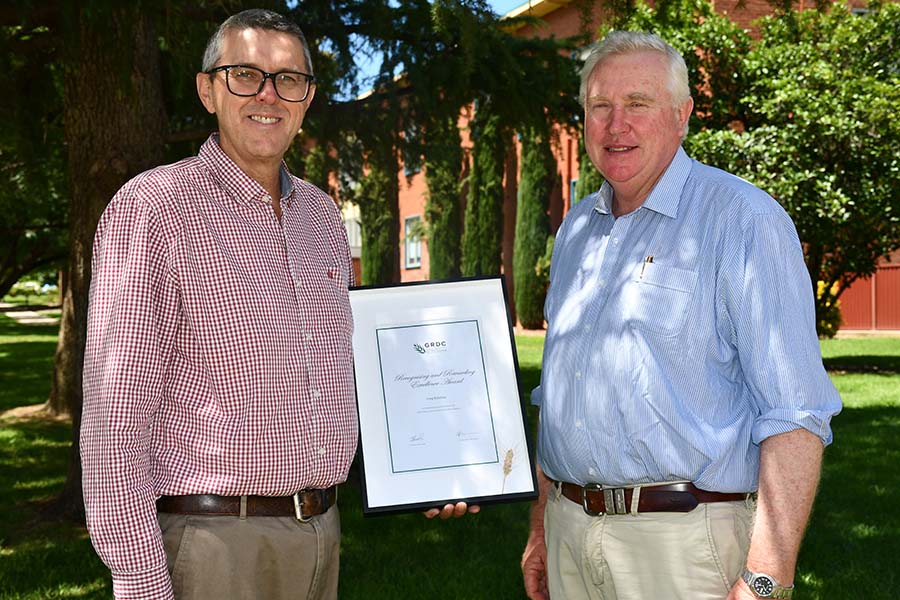 Dr Rebetzke was presented with the award at the GRDC Grains Research Update in Wagga Wagga on February 16.

GRDC Northern Region Panel Chair, John Minogue says the annual award celebrates the grains sector’s most committed researchers and innovators, offering them an international travel bursary, which can be used to extend their professional networks and conduct collaborative research for the benefit of the broader grains industry.

“Greg was selected by GRDC's Northern Region Panel to receive this award in recognition of his genuine commitment to industry and his dedication to delivering genetic traits to commercial wheat breeders that result in meaningful improvements for grain growers,” Mr Minogue says.

“He is a skilled scientist, but what sets Greg apart is his ability to explain his area of speciality – complex genetics, pre-breeding and physiological understanding – in a straightforward, meaningful way that is understood and appreciated by those working in the paddock.

"He is extremely well versed in the language of growers and that makes an incredible difference. Greg is also unashamedly passionate about the grains industry and determined to use his scientific knowledge and research skills to make a positive impact.”

Originally from Brisbane, this rugby union-following Queenslander credits his undergraduate degree at Gatton Agricultural College with instilling in him an appreciation for practical and applied knowledge.

He then refined his research skills through a Masters in Agricultural Science at the University of Queensland, before completing a PhD in breeding and genetics at North Carolina State University in the United States. Dr Rebetzke has worked with CSIRO since 1995 and became a Chief Research Scientist in 2017.

The pursuit of improved knowledge about the genetic and physiological factors affecting water productivity in rainfed winter cereals has taken Dr Rebetzke well beyond the glasshouses at CSIRO’s Black Mountain site in Canberra.

He has been a member of GRDC's Western Region Panel, regularly contributes to a number of national and international grower and scientific advisory committees and is currently editor of the Journal of Experimental Botany.

Yet it is the time spent in paddocks, standing alongside the grain growers he is so committed to helping, that keeps him ‘grounded’.

“Growing up, my family ran cattle on a property near Rathdowney, just south-west of Brisbane, and I relished the time I spent in there. It really was the start of my interest in agriculture,” Dr Rebetzke says.

“Then working with growers along the western most edge of the NSW wheatbelt, early in my career, really confirmed where I wanted to focus my energy.

“I wanted to use science to make a difference, to overcome some of the challenges that growers were dealing with trying to grow crops and remain profitable in some pretty harsh Australian environments.”

When it came to understanding the unique challenges facing those in the paddock, Dr Rebetzke credits his close friendship with the late Neil Fettell, a well-known NSW research agronomist.

“Neil was a good mate of mine for 25 years and he taught me some invaluable lessons, one of which was to listen – really listen – so you understood what constraints growers were genuinely dealing with in the paddock,” Dr Rebetzke says.

“What I realised through Neil was that it was very much a two-way relationship with growers. I could offer good science and they in turn were resourceful and innovative when it came to applying science if it was communicated effectively.”

The experienced wheat breeder also laughs recalling the rather direct and descriptive feedback from growers on the occasion when new ideas or traits didn’t measure up.

“Fortunately, we have had more successes than failures with traits, but you learn from both. One of the greatest things about my work has been the capacity for creativity thanks to investment from organisations like GRDC,” Dr Rebetzke says.

“In Australia we are utilising genetics not used anywhere else in the world and while 80 per cent of the work we do is going to deliver for growers, the other 20 per cent is an exercise in creativity and curiosity and it involves risk and good faith, but it is also where great things happen.”

In thanking GRDC for the honour, Dr Rebetzke says it would rank as one of the all-time highlights of his distinguished career.

“GRDC and CSIRO have allowed me the privilege of an enormous amount of field work and that makes mine one of the best roles. I am also incredibly blessed to have the unwavering support of my family and colleagues in doing this research.

"Finally thanks to the Australian wheat breeding community for their enthusiasm, close engagement and support over the many years.”

Dr Rebetzke is yet to decide how he will spend his award to further develop his expertise to continue to serve Australia’s grain growers.