Early to mid-tillering is optimum time to check crop roots

Early to mid-tillering is optimum time to check crop roots

The best time to check crop root growth for potential issues is early to mid-tillering.

Early to mid-tillering (about six weeks after emergence) is a good time to check crop root growth.

The aim is to see whether subsoil constraints are impeding root growth and are likely to limit crop yield - with a view to ameliorating any problems for next season.

They become more water-stressed during dry periods and hay-off more rapidly at the end of the season.

How to check the roots The best way to check roots is to dig a hole to see how deep the roots have grown and assess why they have not grown deeper.

Compare root growth in good and poor areas within your paddock and your property.

Comparing ameliorated and non-ameliorated areas, such as ripped versus unripped, is the best way to show how the amelioration is affecting (ideally improving) root and plant growth.

Productive areas without any known soil constraints are another 'good area' option.

Small patches of better growth can also show up in previous tree sites or burn piles. These areas showcase how better root exploration, whether from higher pH (where trees have been burnt) or less compaction (crop roots can follow old tree root channels), lead to better crop growth.

What to look for in roots

By early to mid-tillering, a cereal crop should have both seminal (primary, vertical) roots and nodal (secondary, more horizontal) roots. Wheat roots can be 300 millimetres deep at the start of tillering.

Clues that a subsoil constraint is limiting root growth include:

Sometimes, in an attempt to deal with a subsurface constraint, the plant will have increased branching above the issue - for example, more branches above an acid or saline layer. Where there is a compacted layer, you might see some roots trying to grow into the compacted layer, but most roots growing and branching in the softer soil above. 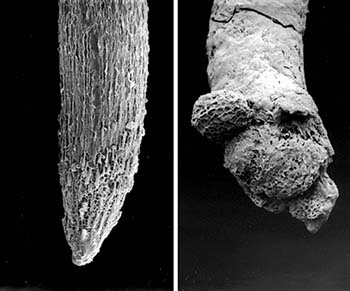 What to look for in the soil

Start by looking where you think the roots should be, based on the root growth in the 'good' area. If roots have not grown much past the surface, check for water repellence.

If the problem is deeper in the soil, look where the root growth peters out. Acidity and compaction have similar-looking effects on roots and the two can go hand-in-hand, so check for both.

In compacted subsoil there will not be many visible soil pores or cracks. In deep sands, press your finger down the pit face, feeling how tough the soil is. If the soil is softer where roots are happy, and hard where root growth dwindles, you have probably got compaction. Using a penetrometer near the pit will confirm how hard the soil is getting at depth. Root growth restriction starts at 1.6 megapascals and severe restriction at 2.5 MPa or more in soils at field capacity. In heavier soils it is harder to judge compaction by feel alone; use a penetrometer.

If roots reach a dense clay or cemented gravel, you have a dense subsoil. Most broadacre crops and pastures will struggle to get into this layer, as will a penetrometer if it hits gravel.

Because sodic soil is often hard, crop root symptoms tend to look similar to compaction. A dispersion test will show whether compaction is caused by too much sodium. Crops with strong root systems, such as lucerne, are better at growing into sodic subsoil.

If there is no obvious compaction but there is moisture below the roots, there may be a chemical choke. Take a soil sample from the soil layer where the roots are growing well and another where they are unhappy. Have the samples tested for pH, salt (E.C.), and boron and chlorine if they are issues in your area.

NOTE: This article was produced as part of the GRDC 'Maintain the longevity of soils constraints investments and increase grower adoption through extension - western region' investment (PLT1909-001SAX).