With his boundless agronomic knowledge and energy, 'Macca' is a worthy award winner.

Mention the name Paul McIntosh to anyone in the northern grains industry and it's almost guaranteed to invoke a smile, a humorous quip or an anecdote about his seemingly-boundless agronomic knowledge.

Mr McIntosh, or 'Macca' as he's better known to many, is one of the region's most recognised and respected agronomists and has been a luminary in broadening the understanding, adoption and community recognition of best practice farming throughout his 40-year career.

His tireless dedication to the industry was acknowledged this week when he was awarded the coveted GRDC northern region 2020 Seed of Light Award at the GRDC Grains Research Update in Goondiwindi.

Initiated in 1999, the GRDC's Seed of Light Award is presented annually to an individual who has made a significant contribution to communicating the importance and relevance of research outcomes to the wider grains industry.

In presenting the award, GRDC Northern Region Panel chair John Minogue said Mr McIntosh was an outstanding leader with an innate ability to distil complex scientific concepts into information that has practical relevance to the industry and broader community.

"When Paul has something to say, everybody listens," he said.

"He is exceptionally skilled in ensuring his conversations are targeted and relevant to the audience - whether that's growers, agronomists, journalists or the general public - and this, in turn, fosters interest, understanding and adoption.

"This is critical to keeping the grains industry at the forefront of best management practice, improving the long-term productivity and profitability of farm businesses and ensuring we have the backing of the wider community.

"He's well-known and liked both within and outside the industry and has always been extremely generous with his time and expertise - regardless of whether you are a large or small grower, eminent researcher, senior agronomist, a trainee agronomist or a journalist.

"He firmly believes that everyone's interest deserves to be given due attention."

He is exceptionally skilled in ensuring his conversations are targeted and relevant to the audience - whether that's growers, agronomists, journalists or the general public - and this, in turn, fosters interest, understanding and adoption. - GRDC Northern Region Panel chair John Minogue

Mr Minogue said the northern grains sector was incredibly fortunate to have experienced professionals such as Mr McIntosh involved in research, extension and communication activities, and the awarding of this year's Seed of Light recognised the enormous contribution he had made over the years to the performance and promotion of the grains industry.

Mr McIntosh began his career in 1974 as a trainee livestock auctioneer at his hometown of Goomeri with the then-Australian Estates company, which later became part of Elders Ltd.

After moves to Australian Estates branches in Charters Towers, Townsville, Julia Creek, Theodore, Rockhampton and Glen Innes during the mid-1970s beef slump - and a two-year stint working on the home farm at Goomeri - Mr McIntosh accepted a position in Australian Estates' merchandise section in Murgon.

Agronomy became a prominent part of his role and his interest in it grew from there.

In the ensuing years, he worked as an agronomist in broadacre crops and cotton across southern and central Queensland. In 1997, he launched Queensland Farmers Warehouse - a successful Toowoomba-based agricultural retail business which opened additional branches in Cecil Plains and Cottonvale near Stanthorpe before merging into National Farmers Warehouse in 2009.

In 2009, Mr McIntosh returned to the agency business as branch manager at Landmark Emerald, and later transferred to Pittsworth to provide agronomic advice to the branch's clients - as well as providing agronomy assistance to the Meandarra and Chinchilla branches. 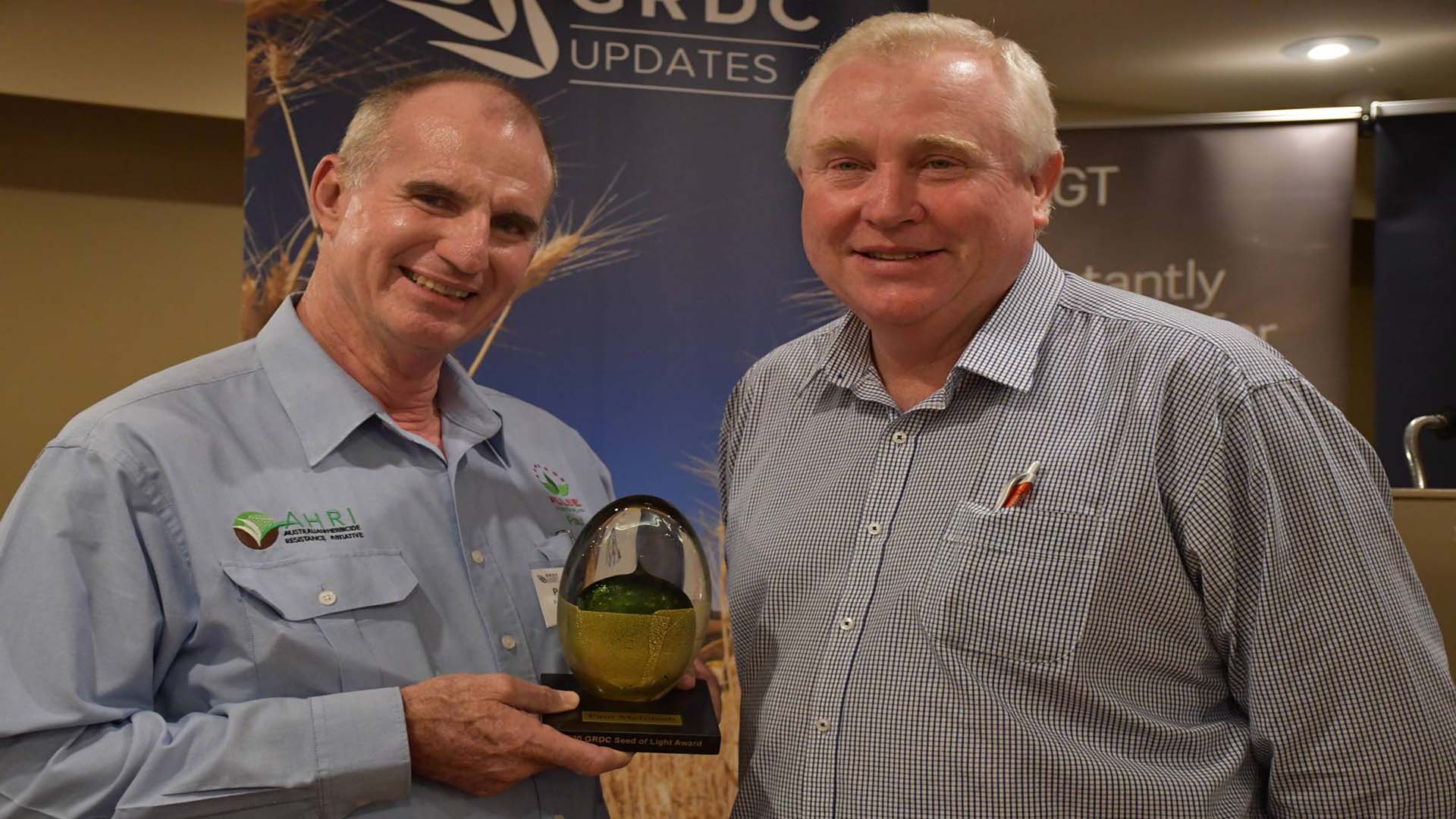 Mr McIntosh said he was incredibly honoured to receive the GRDC Seed of Light Award and proud to serve an industry that had given him so many friends, opportunities and experiences over the years.

"I'm one of those lucky people who love what they do," he said.

"It's given me the opportunity to meet and work with great folk over the years and indulge in hundreds of morning teas and lunches around kitchen tables - all home cooked and thankfully without coconut, gherkin, olive, capsicum and sardines in sight.

"The people are by far the most rewarding part of my job - not just the growers, but also the agronomists, researchers, past and present industry people and my media friends.

"When I was diagnosed with melanoma in 2017, it was the regular contact from work colleagues and friends in the ag industry that helped me restore a sense of `life goes on' normality - it was a remarkable response and pulled me through a very tough time."

Mr McIntosh said he has seen enormous change during his years in the farming sector, largely underpinned by technological advances, machinery improvements and product development.

"Some of the more defining advances include the release of synthetic pyrethroids, like Sumicidin, in broadacre cropping - which was a godsend in the 1980 summer for heliothis and sorghum midge, and the wider use of Roundup, which led to the development of zero-till techniques and changed farming practice as we knew it," he said.

"I often say that technology has given us our paddocks back and those advancements are continuing - technology and innovation are things our industry has always embraced to overcome challenges and take advantage of opportunities. It'll be exciting to see what the next 40 years bring."