A biosecurity sign at a Queensland NVT site.
Photo: GRDC

The annual National Plant Biosecurity Status Report (NPBSR) is a must-have reference guide for producers seeking to understand Australia’s plant biosecurity system, the performance of the system and the greatest pest threats to the grains industry.

Recently released by Plant Health Australia (PHA), the NPBSR is the latest comprehensive plant biosecurity resource detailing Australia’s plant biosecurity system and the pre-border, border and post-border activities undertaken in the past year.

The report brings together contributions from more than 100 government, industry and research organisations, and is the only published source of biosecurity research, development and extension projects aimed at enhancing capability within the system. 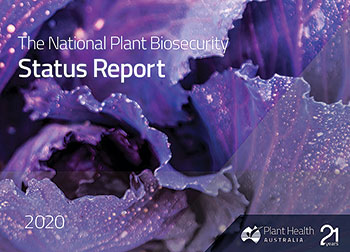 In addition to identifying the greatest exotic pest threats to plant production, each annual report covers the governance of plant biosecurity in Australia and explains the mechanisms, including surveillance systems, which successfully manage the pest status of plant industries. Reports also describe the hundreds of innovative Australian research projects underway or completed over the period of the report.

Biosecurity is key to supporting the agriculture industry’s goal of $100 billion in production by 2030. The NPBSR profiles more than 38 plant industries, detailing their economic value, major growing regions, key exotic pest threats, biosecurity initiatives and contribution of each to the main plant production industries.

In 2019-20, plant industries represented a gross value of $30 billion and plant exports were worth more than $25 billion – mainly grains (such as wheat, barley and canola), sugar, wine, forestry, cotton and horticultural products.

Against a backdrop of extreme weather events, the gross value of agricultural production for 2020-21 was forecast to reach a record $66 billion, boosted by Australia’s second-biggest winter crop on record. Significantly larger harvests in every Australian state were forecast to result in a 59 per cent increase in the gross value of grains, oilseeds and pulses compared with the 2019-20 season. The value of crop exports was forecast to increase sharply in line with record production, up 12 per cent to $24 billion.