Two outstanding achievers from the Australian grains industry, both based in Western Australia, have received prestigious awards during the State’s premier grains research forum. Emeritus Professor Powles, of The University of WA (UWA), is only the fourth person to receive this national award and it was given in recognition of his lifetime of service to the grains industry.

The GRDC Seed of Light award is presented annually to a person making a major contribution to communicating the outcomes of grains research and development in WA.

The awards were bestowed by GRDC Western Region Panel and presented during the Grains Research Update by Panel chair Darrin Lee, who described the recipients as shining lights of the Australian grains industry.

Mr Lee told the event the award winners had made an outstanding industry contribution, not just from a research perspective but in ensuring that information was communicated effectively to growers and then applied on-farm.

“Grains research is extremely important, but to my mind the key ingredient is extension,” Mr Lee said. “It is crucial to ensure research does not sit on a shelf, but that it is extended and helps to improve growers’ practices, technologies and, ultimately, their profitability.

“I couldn’t be prouder today to be making these presentations to two such worthy recipients.”

Professor Powles’ name is synonymous with herbicide resistance research and knowledge, and he is a renowned expert in this field – from molecular mechanisms through to on-farm management.

Herbicide resistant weeds first appeared in Australian crops in the early 1980s and Professor Powles was a pioneer in researching the issue. In the 1990s he became a founding director of the Cooperative Research Centre for Australian Weeds Management, based in Adelaide.

AHRI, which has helped to ensure widespread adoption of important developments such as harvest weed seed control technology, attracts more than $2 million in investment from GRDC annually, and focuses on resistance evolution, resistance mechanisms and resistance management, as well as communications.

For three years, he was a non-executive director of GRDC, stepping down in 2020, and he owns a grain cropping farm at Kojonup.

“There wouldn’t be an Australian grower who has experienced herbicide resistance and hasn’t heard of Stephen Powles, or heard his catchphrase ‘when you’re on a good thing, don’t stick with it’ – referring to the need to mix up the farming system to increase diversity and attack resistant weeds,” Mr Lee said.

The 2021 GRDC Seed of Light Award recipient, Ben White, has extensive experience in the delivery of research and has expertise in the areas of farming technology, grain storage, precision farming, engine technology, harvesting, seeding and spraying equipment. 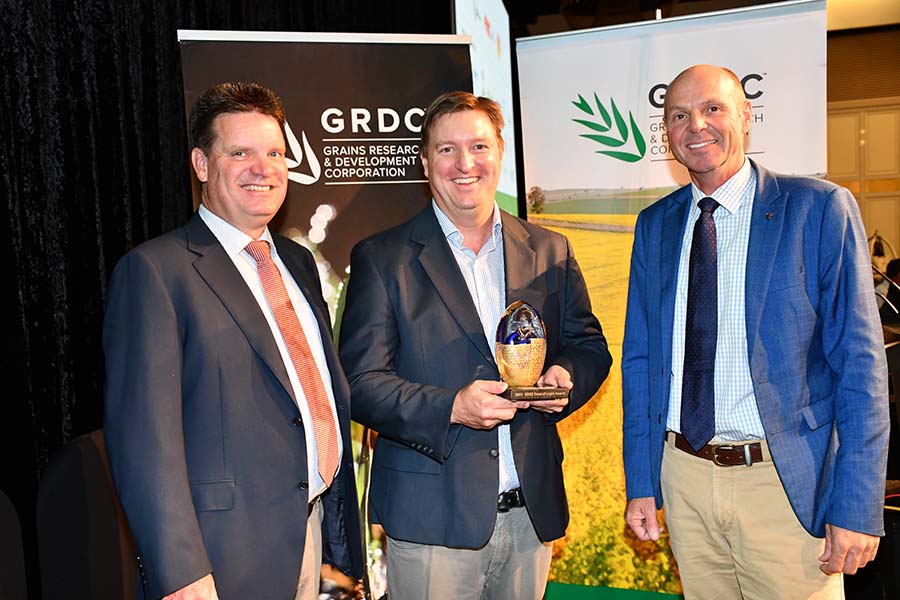 Kondinin Group works with growers, advisers and industry to provide independent information for growers relating to products and services. Mr White has coordinated its research program since 2003 and, as editor of the Kondinin Group’s Farming Ahead magazine, has extensive knowledge of the challenges, cropping systems and technical requirements growers need across Australia’s cropping regions.

“Ben is at the forefront when it comes to knowledge of grain storage systems and handling,” Mr Lee said.

“He also has a highly personalised approach – his engagement with growers and grower groups and on-farm extension approach are truly excellent.

“Ben is willing to come out to the farm, assess the grower’s grain storage system and provide tailored advice to individual growers.”

Mr Lee said Mr White and his team’s honest and easy-to-read machinery reviews, conducted on behalf of the Kondinin Group, continued to be highly regarded and eagerly anticipated by Australian growers.

“The costs involved with buying and renewing machinery have a major impact on farming profitability, and Ben’s reviews are invaluable in informing grower decisions,” Mr Lee said.