Deeper sowing strategies give confidence in legumes in WA

Deeper sowing strategies give confidence in legumes in WA

WA growers can have more confidence in chasing subsoil moisture with legumes.

Taking a lead from innovative growers in Queensland, Western Australian growers are experimenting with greater planting depths for chickpeas and lentils in an attempt to chase subsoil moisture.

Research inspired by practices in the eastern states is suggesting growers in WA can plant chickpea and lentil seeds as deep as 200 millimetres without seeing any yield penalty, regardless of the moisture availability at depth.

CSIRO postdoctoral fellow Sarah Rich has been working with growers in the central and eastern wheatbelt, searching for ways to improve the profitability of break crops.

After stumbling across a Twitter discussion about deeper plantings of chickpeas in southern Queensland, Sarah committed to testing the theory in WA.

The state has very different soils and rainfall patterns to Queensland, but Dr Rich could see the potential deep sowing would offer growers in allowing them to exploit subsoil moisture from early season rainfall events - even when surface soils have dried out by the optimal sowing window.

Traditionally, legumes are planted at depths of about 50mm. Trials were carried out in Merredin and Dandaragan in 2019 to better understand the value of planting early on moisture at depth.

With a dry season recorded in 2019, and almost no subsoil moisture at either site, the early, deeper-sown chickpeas did not see a yield benefit from greater sowing depths.

Conversely, Dr Rich says, there was no yield penalty in the deeper-sown treatments compared to the shallow-sown plots - meaning growers could have a go at chasing any amount of subsoil moisture, confident it will not cost them yield.

"Ideally, we would have been planting early and into subsoil moisture to test the theory that earlier-sown, earlier-germinating legumes yield better than later, shallower-sown crops," she says.

"Given the dry season, we were not able to prove that," she says.

"But what we did confirm is that, if you decide to have a go and plant deep because you think there may be some subsoil moisture benefit, then you will not be penalised."

Dr Rich's research involved planting both chickpeas and lentils at 50mm, 120mm and 200mm depths - with both mid-April and late-May sowing times.

At both trial sites, there was no significant difference in crop emergence time.

While the treatments sown at 200mm had slower plant development, they flowered at the same time and biomass cuts at harvest showed no difference in final plant size.

While there was no significant difference in yield for any of the depth-of-sowing treatments, time of sowing in these lower-rainfall areas was significant. The chickpea and lentils crops sown at the earlier date of mid-April produced significantly higher yields than May-sown crops in both Dandaragan and Merredin.

Dr Rich admits legumes struggle to find a profitable place in the rotations of farming businesses in the eastern wheatbelt, meaning her research is critical to give growers confidence to commit to these important break-crop tools.

In the northern agricultural region, which in the past has been more of a traditional home for lupins, chickpeas and other pulses, plantings have also decreased over the past two decades.

Chickpeas, in particular, have gone out of favour over the past few decades, not only because of seasonal conditions and some unsuitable soil types, but because many growers became wary of high disease risk after Ascochyta blight devastated the industry in the late 1990s.

There has been renewed interest in pulses recently, driven by high prices and new varieties with improved tolerance to acid soils and disease.

"These days, we have better chemistry to handle the diseases and there are good selling opportunities for growers from this northern region," Mr Eyres says.

Weed control, too, is a big part of a successful legume crop.

We often find ourselves in the situation where there is some moisture available, but not enough in the first 50 to 100mm to germinate a crop sown at traditional depths. - Elders Midwest agronomist Nick Eyres

"Without reliable weed control, growers have been faced with a dirty paddock that they have to spend money on to clean up in the years after the chickpea crop - eating into the returns generated by the chickpeas in the first place," he says.

"We are starting to see some new pre-emergent chemistry come on to the market, which brings with it new hope of a reinvigorated legume program in the north."

Mr Eyres believes summer rainfall, and the subsequent subsoil moisture, is the key to a successful chickpea crop in this area and says growers have been asking about deeper planting agronomy to take advantage of moisture that could be as deep as 160 to 180mm.

He says growers will often be concerned about starting a seeding program, with some moisture at depth which may or may not germinate the crop.

"We often find ourselves in the situation where there is some moisture available, but not enough in the first 50 to 100mm to germinate a crop sown at traditional depths. But it is not quite a dry program either, which can be a risky situation to be in. 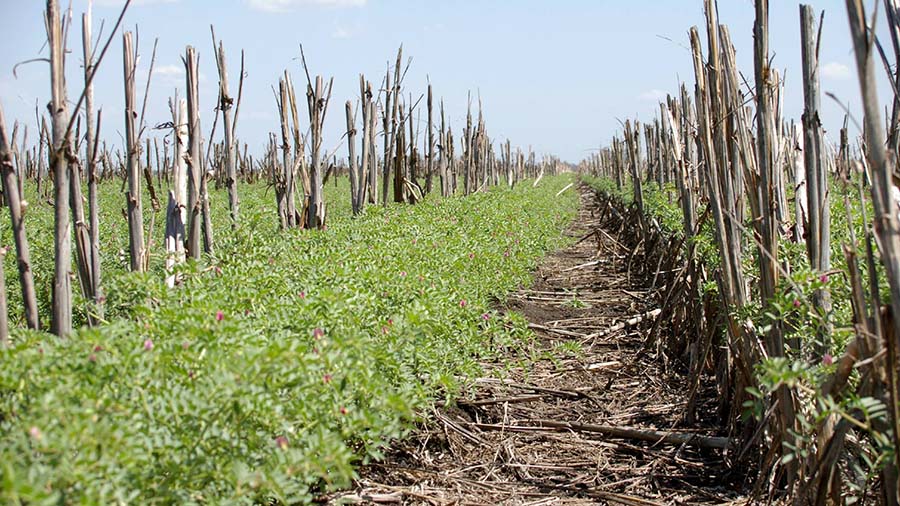 "This season, we had good summer rainfall in February which, by April, was deep in the profile," Mr Eyres says.

"But many growers did not have the confidence to go that deep with their seeding depths because they were not sure if the crop will geminate."

He says early germination is critical to a successful legume crop, which will then allow for good biomass production.

"It is this biomass, not the crop yield, he says, which is important for nitrogen accumulation in the soil," he says.

"There are two ways to look at a legume crop - the first being as a cash crop that is profitable in its own right, with the priority being the seed that is harvested.

"Under this scenario, you will be exporting a lot of the accumulated nitrogen out with the seed.

"The other way to view a legume crop is with a focus right throughout the season on biomass production, not seed production, allowing for maximum nitrogen to be put back into the soil."

In a risk-management strategy, this second approach transfers the income assurance from summer rainfall and subsoil moisture to a cereal crop in the next season.

"The capitalisation on moisture availability early in the season, and turning that into nitrogen, will ultimately be realised almost two years away in a harvested cereal crop. It is all about cash flow." 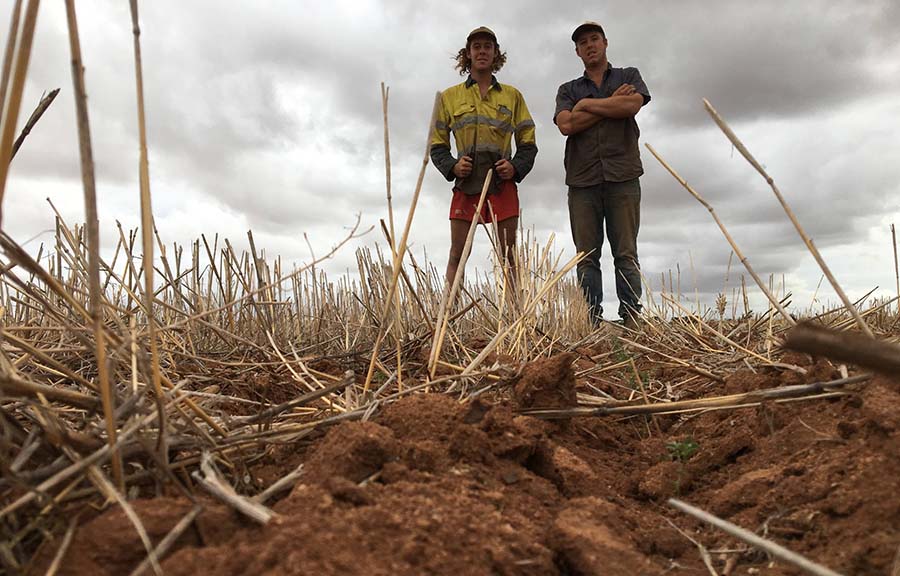 Mingenew grower Jack Mills, with advice from Mr Eyres, is using Dr Rich's research findings to trial five hectares of chickpeas on his property this season.

The property received 130mm of rainfall at the end of February 2020 and - at the time of sowing the chickpeas in mid-April - he estimated subsoil moisture was at depths of between 160 to 180mm. The trial was planted at 200mm into moisture.

The Mills' have sown chickpeas in the past, with limited success.

"We gave chickpeas a go a few years ago, but they did not yield very well, probably because the season was just too dry, and we might also have sown them into soil that was not suitable," Jack says.

"Given the summer rainfall we received in February this year, we thought this was an opportunity for us to capitalise on the subsoil moisture and see what we can achieve from an early sown legume crop."

Soil acidity in the trial is about pH 5.0, which Mr Eyres and Jack believe is at the lower end for a viable chickpea crop.

"The whole site may not be a success," Mr Eyres says.

"But the biggest learning opportunity for us is to know where we can and cannot plant this crop - and applying these findings across the business, so we can jump on these early moisture opportunities with confidence."

The paddock trial is focusing on biomass - not yield - and will be sown to wheat next season.

"The real test of the value of this 130mm of summer rainfall will only be realised when we assess the wheat yield at the end of the 2021 season," Mr Eyres says.

Not only that, he says, but the impact on wheat yields for up to four years will also prove an interesting study. "Really, it is just about having a go, and having confidence that we will not be penalised for trying to jump on these early rainfall events."