Monitoring top of mind for grain growers across the country

Monitoring top of mind for grain growers across the country

Each year, GroundCover™ follows a group of growers from across Australia as they manage the winter cropping season. This is the fourth instalment in the 2019 series.

Simon Burgess farms at Conara in Tasmania's Northern Midlands as an operating partner in a private equity business. He crops wheat, canola, poppies, barley and faba beans. He also runs Angus breeders, backgrounds and agists steers, trades lambs and has a breeding flock of 2500 ewes.

Establishment has been good in our autumn crops following early irrigation and applications of pre-emergent and post-emergent herbicides. But with quite windy and inclement weather throughout July, finding spray days was challenging.

A first round of nutrients was applied in late July and early August (to our irrigated country) and we're watching the weather before pressing on with a second application for our dryland crops, which comprise about 20 per cent of our operation. Our soil moisture bucket is low so we're relying on spring rain for our dryland area, which is mostly canola this year.

Long-season Relay and DS Bennett (PBR) wheat varieties are performing beautifully in trials. Our resistant ryegrass control trials with Southern Farming Systems are showing that pre-emergent herbicides are effective. It's just a blanket of annual ryegrass where they weren't applied.

Despite receiving 25 per cent less rainfall than our long-term average, decent late-July rainfall meant paddocks were wet on top so we had to be careful preparing our spring country.

Given the seasonal outlook (for warmer, drier conditions), we brought forward our poppy program to July. Earlier sowing allows us to take advantage of the winter moisture and reduce our reliance and stress on irrigation infrastructure. Our spring crops, apart from potatoes, should be planted by mid-September.

The storage facility we erected last year is paying handsome dividends, commodity prices are good and the dams are full. So I keep looking over my shoulder to see what I've missed.

We are having a fantastic year. The crops got away to a great start and even if the spring folds up, subsoil moisture is good so we should still go okay.

We've been monitoring crops to work out how much nitrogen to apply because the forecast of a warm, dry spring isn't great, but it keeps raining. Growing season rainfall is about average. We've been a bit conservative with our nitrogen inputs, splitting urea applications and relying on soil tests to determine rates.

We were held-up in July with damp, cool, overcast conditions that made spraying a challenge. Being damp doesn't help for wheat diseases so fungicide was applied in August and we'll apply more to our wheat and barley at the flag-leaf stage during September.

We are having a fantastic year. The crops got away to a great start and even if the spring folds up, subsoil moisture is good so we should still go okay. - Bernard Lindsay, Lah, Victoria

A couple of wheat and barley paddocks are earmarked for hay because I have seen some ryegrass escapes. There's probably been a bit of resistance building and herbicides can break down with rain, so some chemicals might be running out of puff. It's not a disaster cutting hay when there's demand for it.

The big crop for us is canola. Our hybrid canola is powering ahead of the open pollinated canola with more growth.

Our Merinos started lambing in August. There was plenty of feed in our March-sown lambing paddock so the sheep are in good order.

Aside from spraying and urea spreading, we have been maintaining our fences and keeping the fencelines free of weeds.

I'm cautiously optimistic about the season. Spring is everything for us for yield so we'll still be looking for rain.

Evan and Katrina Lord farm at Mirrool, in south-western NSW as part of the DB Group with Matt and Sam Dart, and Richard and Trudi West. They grow wheat, barley, canola, lupins and vetch for brown manure and oats for feed. They also run 1800 Dohne ewes. 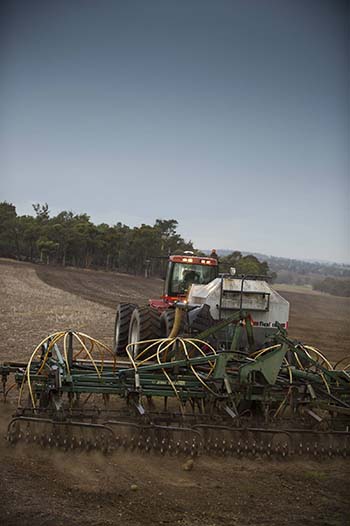 We had an ideal start to the season. Everything germinated well, and we had good establishment and weed control so the crops are quite clean. Frequent showers of five to 10 millimetres have kept us going through winter but throw in a couple of warm, long days and the crops will start chewing through a bit of moisture. We're still in the game but it needs to rain in September, as always.

We top-dressed our canola and grazing wheat, but there was no need for fungicide in wheat because there wasn't the moisture, humidity or dampness around the canopy before adult plant resistance kicked-in. There wasn't the time for rust spore numbers to build and blow in from the west so I think we'll scrape through.

We also haven't really seen any pest insects. There are plenty of beneficial insects around. The crops are healthy and pest insects seem to attack crops under stress. We generally don't see early pest infestations. Aphids usually arrive later in the season.

Deep nitrogen tests indicate we have enough nitrogen for average yields at 11 per cent protein. We waited until mid-August to decide if we had the potential to go higher and top-dress cereals. We may still dabble a bit to have a bet each way.

We're really lucky. You don't have to go too far north of us, just 30 kilometres, and conditions are very dry.

We aim for a late-September flowering, as we do every year, to beat the heat stress while missing the frost. With everything germinating in its window we're on track for September flowering. We're really lucky. You don't have to go too far north of us, just 30 kilometres, and conditions are very dry.

David and Kerri Giddings and their children farm at Wanilla on the Lower Eyre Peninsula. They grow wheat, barley, canola and lupins, and run 3500 Merino ewes, of which 1500 are mated to Merinos and 2000 mated to Dorsets.

Our country started drying out in July after 190mm in the seven weeks to the end of June.

The wet conditions affected the germination of some crops and we had to re-sow about a third of the canola and but it now looks good.

The early and dry sown crops are advanced and way ahead of the crops sown into moisture. By July, the lupins and canola were flowering, the barley had flag leaves out and the wheat had developed a couple of nodes.

The last of our urea went on in July and after that kicked-in the crops really turned the corner. I added some more fungicide to the canola for sclerotinia control during August. With good weed control, everything is looking okay.

We have plenty of stored soil moisture so we may not require a large amount of rainfall in spring. I wouldn't say it's the perfect year, but we have the potential to make average to above-average returns.

Tim and Victoria Harrington and their children farm at Darkan in Western Australia's high-rainfall zone in the south-west of the state. They crop barley and canola. They also run 5500 ewes and 800 wethers. 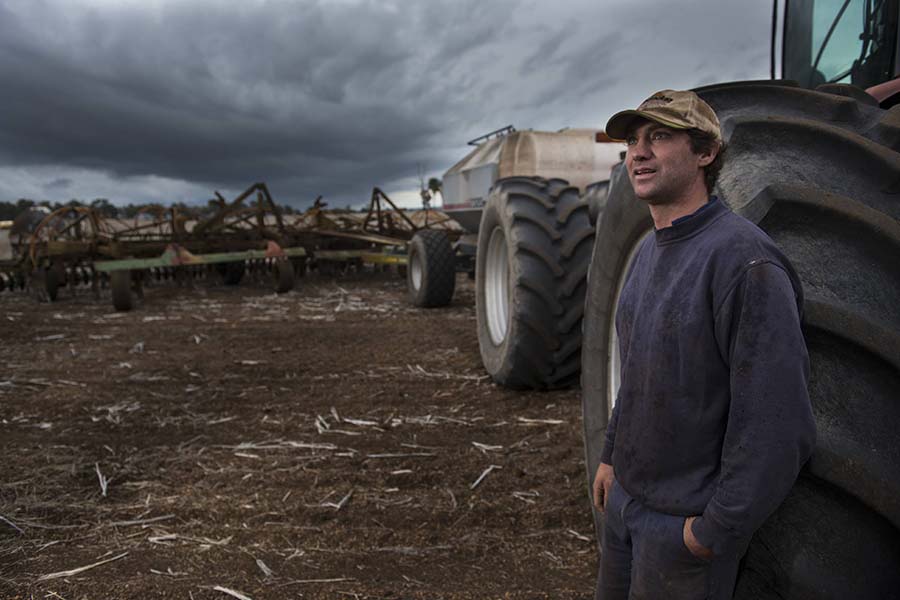 Tim Harrington is looking at how people in other primary industries, such as avocado and fish farmers, deal with labour and logistics to help improve his own farm business operations in south-west WA. Photo: Evan Collis

It's been dry. The crops have grown well, but we are nervous about our stored soil moisture reserve. Our sandy gravel soils need frequent falls of rain.

We've applied nitrogen to the canola and sprayed all the cereals for broadleaf weeds.

I'm really happy with the long-season wheat. It tillered and grew as expected so it will be interesting to see what happens if the season doesn't finish well.

Wetting agents helped seed germination, but we are still looking at a range of soil amelioration techniques. Mouldboard ploughing to dilute our top 100mm of soil seems to work, but if it had just rained from the end of April it would be far easier.

I've applied fungicide to the barley, but am taking a 'watch and see' approach for sclerotinia spraying in the canola and cereals. I'm also hiring contractors because I've found that timing is everything.

A spreading contractor put urea out at the right time in July while I was with our grower group, Compass, in Queensland. We were looking at how people in other primary industries, like avocado and fish farmers, deal with labour and logistics.

Stephen Gibson farms with his parents Brian and Kaylene, and sister Ann-Maree at Dulacca on Queensland's Western Downs. They crop wheat, barley, chickpeas, sorghum and mungbeans.

We've been through most of the season without a significant rainfall event.

Our early Bourlag wheat should yield well, despite only receiving 10mm of rain. Our Spartacus (PBR) barley is short and will be a challenge to harvest. We planted Sunmax (PBR) wheat for the first time and it's been dropping tillers, but we hope it will produce a head for harvest. The chickpeas will be okay if rain arrives by mid-September, but the potential has already been lost in most of the other crops.

We've had several frosts, but the Bourlag wheat is planted on country high enough to be out of the frost zone. Anything with stubble cover in a barley/wheat rotation is performing well. There's one paddock in its third year of cereal rotation and it is miles ahead of the others, but we won't continue this practice because of disease risks.

In dry years like this, potential underlying problems surface such as nutrient deficiency, compaction, weeds and disease. Nematodes and crown rot are the most common and concerning and we have been scouting for anything suspicious and conducting tests. If we find nematodes we change the rotation by replacing cereals with sorghum.

When it's dry, kangaroos and pigs also become a problem, migrating from the west. The kangaroos eat the wheat and the pigs eat the chickpeas.

We have also been de-silting dams and doing some contracting.