Ardath, Western Australia, grower Phillip Foss has been using serradella in his rotation for more than 15 years and is reaping rewards from this pasture-cropping system.
Photo: Evan Collis

The value of serradella in improving protein levels in subsequent cereal crops has been highlighted in a research trial in Western Australia's central wheatbelt - despite a lack of summer rainfall and an overall dry season.

The trial, on the property of Phillip and Kelsie Foss - at Ardath in WA's wheatbelt - is examining the impact of the pasture legume on the protein, yield, soil disease and nitrogen levels of cereal crops planted in following years.

A long-term supporter of pasture legumes, Phillip has been using serradella in his rotation for more than 15 years.

Given his reliance on sheep in the system, the pasture legumes provide a number of benefits, including weed control, livestock feed and even yield increases in his cereal crops.

Phillip says the hard-seeded pasture legumes - which have the seed still contained in the pod - allow him to get a jump on his seeding program and plant the crop in late summer, knowing it will take months for the pod and hard coating around the seed to break down before gemination.

He is particularly interested in the hard-seeded Margurita (PBR) serradella because of its regenerating properties, which allow him to have one year in pasture, two in crop, then back to pasture without having to replant.

"This allows me to reduce the machinery movements on those paddocks, so we hope to transition more of our pasture paddocks into Margurita (PBR) in coming years simply because of this regenerating feature," he says.

Given that the business has 30 per cent of its program dedicated to sheep, the paddocks must be useful in both the pasture phase of the rotation and the cropping phase.

Phillip says planting a regenerating pasture legume can achieve this objective for his business.

"With some of the pasture legumes, the sheep will eat all the weeds first before resorting to the pastures, meaning the paddocks are nicely cleaned up for the next cropping season," he says.

Phillip says sheep will remain in his rotation for risk-management reasons, particularly now that his regenerating pasture legumes have been performing so well over a long period.

Low-rainfall years in 2018 and 2019 meant the pasture legume crops were not harvested, but since these crops are regenerating, he says it is simple to keep these pastures in the rotation for many years.

Given his reliance on pasture legumes for his sheep flock, he was interested to see research data relating to the impact of serradella on his subsequent cereal crops.

With some of the pasture legumes, the sheep will eat all the weeds first before resorting to the pastures, meaning the paddocks are nicely cleaned up for the next cropping season. - Western Australian grower Phillip Foss

"Our system is 70 per cent cropping, so anything we do in the pasture phase has to complement our cropping program," Phillip says.

"We are hoping to see that these pasture legumes provide us with a benefit in our cereal crops - not just as a nutritional feed source and weed control strategy when in the pasture phase." 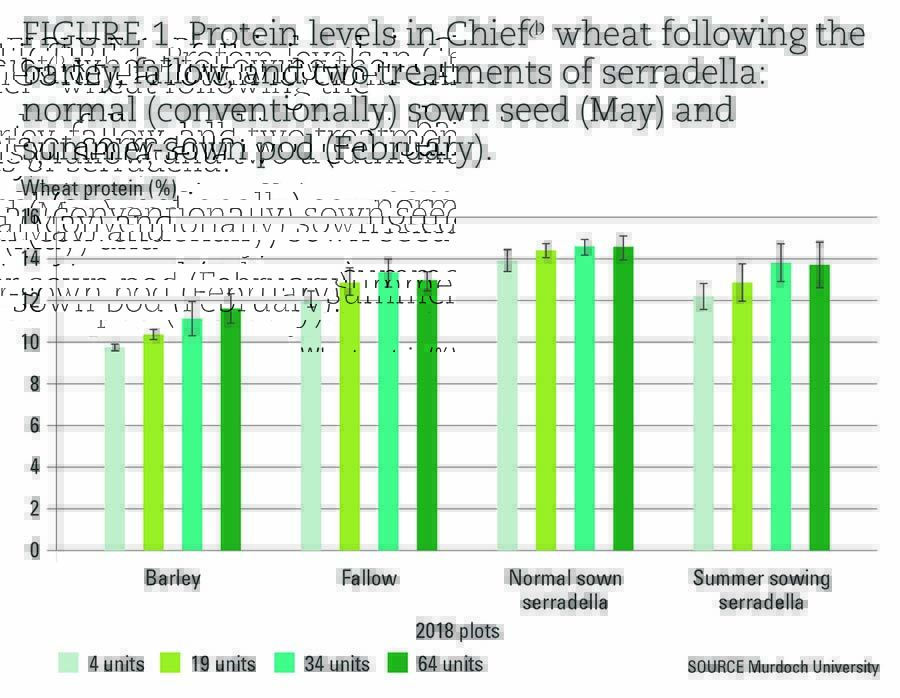 Murdoch University Centre for Rhizobium Studies research officer, Robert Harrison, is managing the research on the Foss property and says the trials have been an interesting learning curve for his team, with some unexpected first-year results.

Both summer-sown (February) and autumn-sown (May) Margurita (PBR) serradella were compared with a chemical fallow and a barley crop - all planted in 2018. The plots were then planted to Chief (PBR) wheat in 2019.

Mr Harrison says the dry spring in 2018, followed by a dry summer and autumn in 2019, impacted significantly on the trial results, particularly in terms of nitrogen availability and yields.

"After such an exceptionally dry end to the 2018 season, combined with a very dry start to 2019, we did not expect the results from these trials to illustrate much," he says.

"The real value of pasture legumes in a cropping system is often only realised when soil nitrification occurs after rainfall events during these summer months." 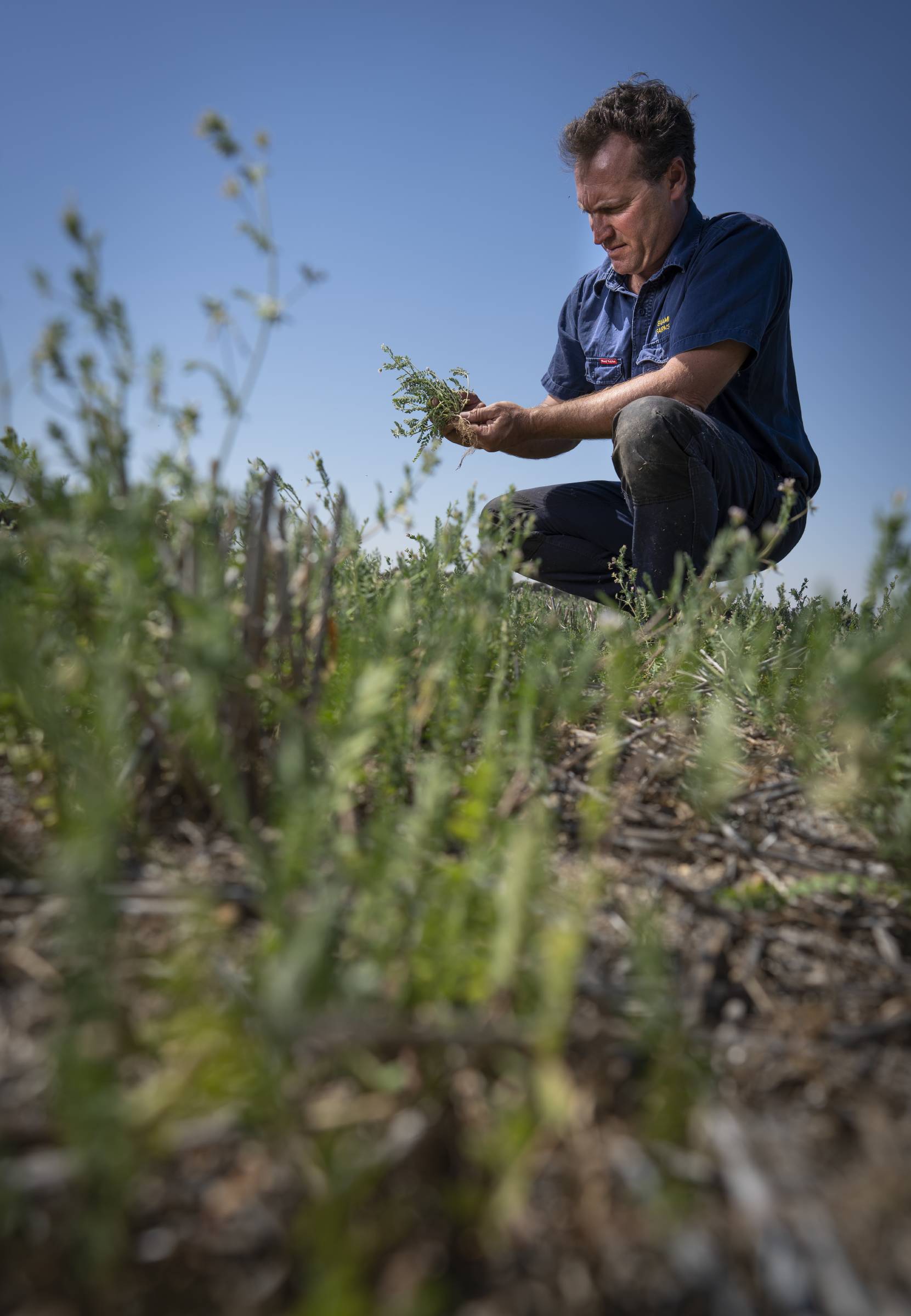 Phillip Foss says pasture legumes have allowed him to reduce machinery movements on his paddocks and have boosted cereal yields in following years. Photo Evan Collis

Despite these extreme climatic conditions, increases in wheat protein levels in the year following serradella were obvious, demonstrating the value of pasture legumes even in these dry conditions.

Protein levels in the Chief (PBR) wheat immediately following both the summer-sown and autumn-sown serradella were all above 12 per cent, with some treatments above 14 per cent, potentially providing a price premium.

Importantly, there was no significant response to the added artificial nitrogen after both normal-sown and summer-sown serradella compared to the ex-barley plots.

"This is compared to results from the treatments that followed barley, where none of the harvested plots achieved protein above 12 per cent, despite four different applications of nitrogen throughout the season," Mr Harrison says.

The 2018 chemical fallow treatment was the clear winner in terms of subsequent wheat yields and low screenings in the second year, which Mr Harrison suggests is simply a response to a dry season.

"The chemical fallow is clearly a good choice if you can predict a future dry season in regard to conserving moisture, but for many growers leaving paddocks out as a fallow may not be a financially available option," he says.

"Had this been a normal rainfall year, we believe these results would have been very different and the yield response from the pasture legume treatments would be much higher."

Mr Harrison says the soil moisture requirements of the pasture legumes throughout the dry spring of 2018 would have impacted on the wheat treatments in 2019.

"In fact, we visually saw those wheat treatments haying off much earlier in the season than the wheat crops on the fallow and the barley treatments," he says.

While the autumn-sown serradella treatments showed the highest levels of plant nitrogen in the subsequent wheat crops, there was no statistical significance between the data. 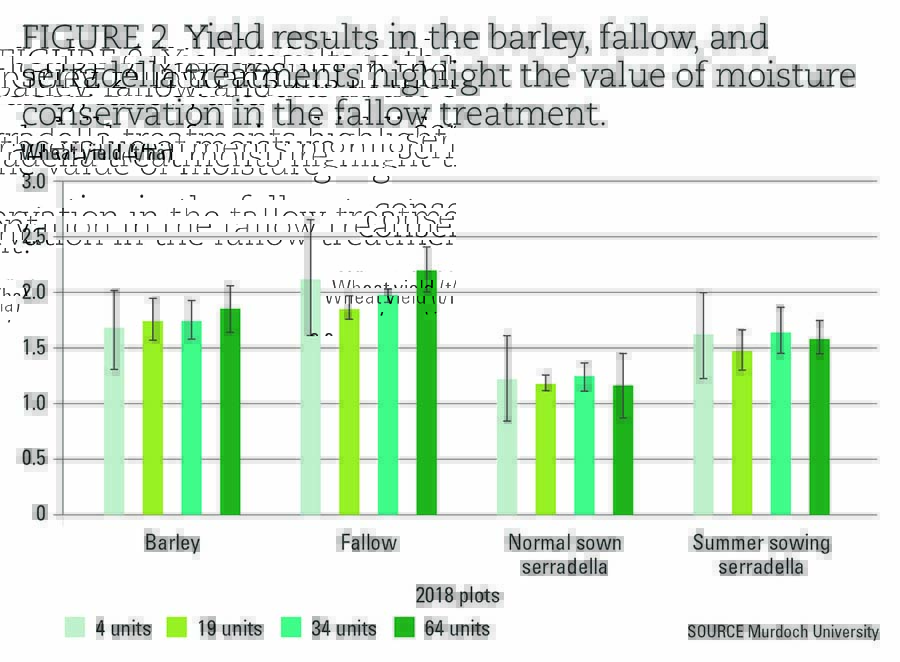 All these results are pointing towards the incredible value of summer rainfall to ensure nitrification occurs in the soil, providing usable nitrogen for future crops.

The importance of summer rain

Ninety per cent of nitrogen in the soil is organic and must be converted to an inorganic form, such as ammonium or nitrate, to be used by the plant.

An important process to achieve this is nitrification. This is a complex conversion that occurs when warm soil temperatures, moisture and a range of other factors combine to activate, or mobilise, soil microbes to undertake a process that can transform ammonia into nitrite, then turn that nitrite into nitrate.

"There are a series of factors that need to co-ordinate to ensure this process takes place, including the availability of oxygen in the soil, the right pH and the correct soil carbon to soil nitrogen ratio," Mr Harrison says.

"Following that, if there is enough moisture in the soil, combined with soil temperatures between 20°C and 30°C, nitrification will occur, which unlocks available nitrogen in the soil for the coming season."

Without this summer rainfall, the nitrification process could be stalled and the value of the legume residue may not be realised straight away.

The information we are collecting will help farmers with their decision-making to minimise risk in their whole farm operation. - Centre for Rhizobium Studies researcher Robert Harrison

Mr Harrison says too much water will impede this process since nitrification requires a good soil availability of oxygen. In fact, waterlogged conditions can reverse the process and convert nitrate back into ammonia.

"It is a multifaceted process that requires specific conditions to achieve maximum value for crops in the coming season. In Western Australia's grain growing regions, we will often have seasons where nitrification will not occur," he says.

"What we are seeing from this research is the very real impact of a lack of summer rainfall but also the value of serradella in improving protein levels in subsequent cereal crops despite the dry summer months.

"The information we are collecting will help farmers with their decision-making to minimise risk in their whole farm operation."

No summer rain - where does the nitrogen go?

This year, the trials will continue with all the treatments again planted to Chief (PBR) wheat.

Mr Harrison says the pasture legume residue still in the soil needs at least four years to completely break down.

He says given the significant rainfall early in the 2020 season, nitrification would have occurred - creating available nitrogen ready for the 2020 crops.

"The residue can last a long time in the soil, and just because it was not activated last summer, does not mean that it cannot be used by the plants as available nitrogen this season if nitrification occurs," he says.

"We will be very interested to see the results from this current season, given this property received 53 millimetres of rainfall from the end of February to early April, which will assist us to better understand the value and impact of the nitrification process in a pasture and cereal rotation."