The McAlpine’s Buntine property is located in an area where average growing season rainfall (GSR) has been decreasing, with rainfall events becoming smaller and less frequent during the traditional growing period. There has also been a shift towards later and more variable season breaks.

These factors combine to make it increasingly common for growers in the region to be seeding much of their program into marginal moisture conditions.

For Stuart, however, this problem has recently been lessened by the switch from a tyne seeder to a new Horsch Pronto 12 NT disc seeder. The new seeder allows significantly increased efficiency at seeding, reliably operating at 18 kilometres per hour without impacting seed placement, wheel slip, soil throw or seeding rate capacity. 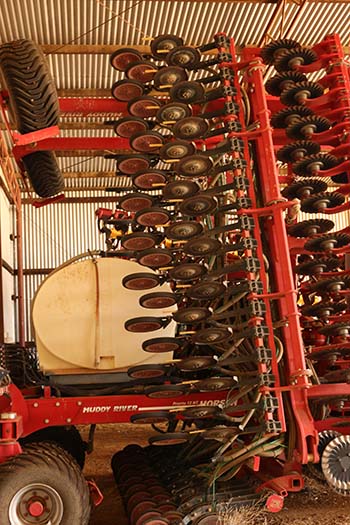 Stuart McAlpine believes that good establishment is crucial to the success of every other aspect of farming.

With their 18m (60 foot) seeding bar, the change from the standard eight km/hr speed has more than doubled their seeding rate from 14 hectares per hour to 33ha/hr.

Stuart works his seeding program to an end date. This is the date by which his entire program will be seeded regardless of the how the season has progressed.

“A knockdown is preferred, and a double knock if possible, for some of the poorer paddocks. If rainfall allows, we will wait to get that knockdown and then start seeding and keep going until it’s done,” Stuart said.

“But even if we haven’t had a chance to do a knockdown, I have a date in mind of when I need to start seeding to have the entire program finished by the end of June.”

With the new equipment, it takes Stuart half as long to implement the entire seeding program. Given their seeding strategy, this increased efficiency gives the McAlpines a much higher chance of achieving a comprehensive knockdown and seeding into more optimal moisture conditions.

The new disc seeder also achieves more even establishment overall. The wavy discs that pre-cut the seed row cope well with even heavy stubble load. Stuart hasn’t had any issues seeding into stubble since using the machine.

The coulters also follow the contour well to achieve more even and more controllable seeding depth, despite uneven soils. The rubber coulter and rubber press wheel work to release high pressures to minimise the effects of speed on seeding depth.

These factors combine to allow the disc seeder to achieve more even and reliable establishment across a range of conditions and soil types.

Stuart is not particularly impacted by this limitation as he is operating a minimum till farming system. However, it may be a significant consideration for others.

Stuart believes that achieving successful establishment depends on adequate soil moisture and having accurate seeding equipment.  Both factors can be difficult to manage depending on the resources available.

“The most important steps in maximising establishment are seeder calibration, starter fertilisers and seed treatments, specifically biological inoculants, as no pesticides or fungicides are used in our farming system,” Stuart says. “Calibration is the most important step and is completely dependent on the disc seeder we use.

“I was especially drawn to the Pronto because it is well-known for its accuracy and defined furrows.”

Stuart recommends a few key tips for those wanting to improve their soil sampling and move closer to what they see as ‘success’.

The McAlpines have found increased efficiencies and improved overall establishment from switching over from their tyne machine to the new disc seeder.

The McAlpines monitor seeding depth whenever conditions change, such as moving to different soil textures (such as ripped versus unripped), soil types or soil moisture conditions.

Stuart is willing to spend as long as it takes to optimise seeding depth. However, with the new disc seeder hasn’t taken long to adjust. On average they spend 30 minutes to adjust to the correct depth.

Looking forward, Stuart wants to make a few changes, including starting to optimise his press wheel pressures and vary them more between soil types. This will help to optimise soil seed contact.

He will also purchase a new lead tractor more suited to pulling the disc seeder at higher speeds.

More information: ‘Seeding systems – case studies of growers in WA’ and ‘Golden rules for canola in the low-rainfall zone’.