Ben Findlay’s winter grains program includes a paddock of RGT Cesario (PBR) wheat that has been entered in the third year of the Hyper Yielding Crops awards.
Photo: Clarisa Collis

Each year, GroundCover™ follows a group of growers from across Australia as they manage the cropping season. In this third instalment for 2022, they tell Nicole Baxter, Clarisa Collis and Andrew Cooke how they fared with planting their winter crops.

Andrew and Marie Fowler, with Andrew’s brother Simon and sister-in-law Robyn, run a mixed operation across a number of locations between Condingup (near the south-east coast) and Beaumont (45 kilometres inland). They grow canola, wheat, barley, vetch, serradella and ryegrass pasture and run 24,000 Merino ewes and 2400 Angus breeding cows.

We have finished seeding and are looking forward to an annual camping trip that we take with staff – including backpackers and other workers. We like to get away after seeding each year to reward staff and give backpackers a camping experience.

Seeding was interesting – and a bit harder than usual. Some of our paddocks received up to 200 millimetres of rainfall over three days at the start of seeding, which meant there was lots of erosion and burst seed.

Because of the isolated, heavy rainfall, we have paddocks in all sorts of different conditions. There are a number of paddocks where the crops look great, but I also lost count of the number of times we got bogged during seeding, and we had to drop a couple of paddocks from the program because they were just too wet. Those will become pasture paddocks as a result.

We’ve planted canola, wheat and a little bit of barley. Our pasture phase is a legume phase, and about 10 to 15 per cent of paddocks are reseeded each year. That includes serradella, vetch, medic and balansa clover.

Overall, though, it’s shaping as a really good season for crops. Grain prices have stepped up a fair bit, so that gives us a lot of confidence. But input prices are also increasing, so we have to watch that.

My brother manages the livestock operation, which is always busy. He will be feeding lambs up until early July. They’ve also been marking lambs, as well as carrying out artificial insemination of the heifers.

Luke and Sophie Bradley, with Luke’s parents Peter and Kerrie, crop dryland sorghum, wheat, barley and chickpeas at Orion in the Springsure district of the central highlands, about 300 kilometres towards the coast at the Boyne Valley. They grow irrigated mungbeans, corn and hay. They also run 370 beef cattle.

Central Queensland has had some good falls of rain, which included our farms. We planted some fallow country to winter crops. This included a combination of wheat and chickpeas. Even though we are not seeing the same gross margin for chickpeas as is available for wheat, we kept chickpeas in our system.

We are determined to move back to a better long-term rotation, which would include 40 to 50 per cent sorghum and the remainder divided between wheat and chickpeas.

We will have more wheat than chickpeas this year. Paddocks earmarked for planting were those that were carrying higher nitrogen reserves. This will ensure we can produce high-protein crops.

We’ve planted some barley into our irrigated country because it provides a lot better access to end users that will take barley hay over wheat stubble. We have a good export opportunity for barley hay as opposed to wheat stubble.

Although it is tempting to go ‘all out’ now it has rained, we have stuck to our plan. We’ll start preparing some of our ground for summer crops and managing those fallows to eradicate weeds and preserve moisture.

We will also keep an eye out to see what we can do for ground cover opportunities in those areas as well. We had some great success with sorghum last year. It is relatively inexpensive because we can just use seed out of one of our silos and turn that into a cover crop. But we will wait and see what the season presents to us in terms of what we will do.

Ben and Karli Findlay farm at Weatherboard, north-west of Ballarat, at an elevation of 400 to 700 metres in an area subject to cool conditions, high rainfall and wind. They grow wheat, canola and faba beans and graze first-cross breeding ewes.

We built a new airseeder machine and had to wait for parts, so seeding started later than usual in mid-April and finished in early May. We’ve sown 220 hectares of Pioneer 45Y95 Clearfield® canola, followed by 250ha of Big Red,  RGT Accroc and RGT Cesario wheat varieties, and 40ha of PBA Bendoc Clearfield® faba beans.

Our winter grains program includes a paddock of RGT Cesario wheat that has been entered in the third year of the Hyper Yielding Crops (HYC) awards led by Field Applied Research Australia. It receives the same management as the rest of our wheat area.

Favourable conditions, sowing into a moist seed bed, have spurred successful crop germination and uniform establishment. But slug pressure was unusually high, so we had to apply bait to our canola paddocks four times. And, for the first time on our property, bait was applied to a wheat paddock to control slugs. Plus, we baited some paddocks to control rabbits.

We used a double-knock herbicide strategy, including an application of glyphosate five days before sowing, followed by a post-sowing, pre-emergent (PSPE) application of paraquat. Insecticides were combined with the PSPE spray, mainly targeting cockchafers, earwigs and redlegged earth mites.

Fiona and Craig Marshall run Bull Plain Farms at Rennie in the NSW Southern Riverina. Their main enterprises are dryland wheat, barley and canola, with some oats, lupins and mixed-species pasture for 2200 crossbred ewes that represent 10 per cent of the business.

We finished seeding on 25 May, which was later than our target of 10 May due to rainfall that made some of our rising soils too wet for traffic. We used this to our advantage, turning our attention to spraying the canola and lupins for grass weeds.

The early autumn break has given us the opportunity to achieve some great weed control. All the crops are up and growing well. We have seen nil mice or slugs, but have heard they are about in our area so we’re keeping our eyes peeled.

Our focus now is on applying urea to crops. While we produced good yields last year, our protein levels were low, which indicated nitrogen reserves in our soils were also low. Deep nitrogen tests confirmed this was the case.

By the first week in June urea prices had lowered slightly, the long-term rainfall outlook was positive and commodity prices were excellent. Accordingly, we are trying to make sure we do not leave any yield behind.

We have bought a lot of urea and spent time in late May and early June stockpiling it. Our first dose went out in late May on the canola and on some barley. Rather than applying it with our own machinery, we employed a contractor. He has a purpose-built truck that is lighter than our machinery so he can continue applying urea in wet conditions that are likely to bog our gear.

Using a contractor has also enabled our worn-out team to have their weekends off and recuperate after a long sowing. Because of the high nitrogen prices, we introduced more lupins and faba beans into our program. The paddocks sown to pulses will be sown to canola next year. With the excellent start to the season, we are extremely positive, despite the high input prices.

Robert and Courtney Pocock, together with Robert’s parents Bruce and Gaye, farm at Lameroo in the southern Mallee. They grow wheat, barley, lupins, hay and vetch, and perennial pastures of lucerne and veldt grass for 1850 ewes including 700 stud ewes. 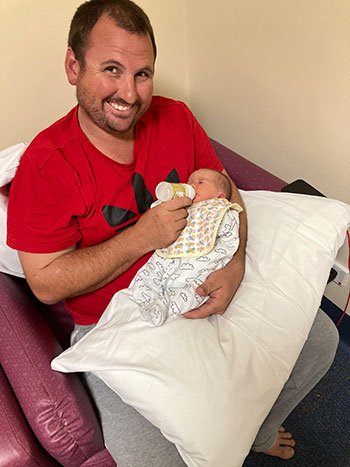 Dry conditions and machinery issues meant we started our seeding program a week later than usual in mid-May. Seeding was mostly finished by mid-June.

We’re planning to sow 150ha of Aurora and SARDI 7 lucerne, but we’re gradually phasing this crop out of our program due to its lacklustre performance.

Some of our lucerne area has been replaced with cereal rye, which we planted for the first time this season as a cover crop grown for feed and grain. Our 1850 poll Merino ewes are lambing, and we’ve started using a second-hand JayLor feed mixer wagon, with 24-cubic-metre capacity.

The wagon functions to mix rations of grain and hay, which has reduced selective feeding, leading to a reduction in both feed wastage and flock fatalities.

We’ve also finished levelling the soil surface using a levelling bar and a steel roller across 100ha where we delved and spread clay to ameliorate non-wetting sandy soils. A new family member is keeping us busy. Our daughter Ruby Elise was born on 29 March. Ruby is younger sister to Thomas, 4, and Hugo, 2.

We finished sowing about mid-May, with the last of the dryland wheat, oats and barley going in. Everything is now up and going. Wheat is at the two-leaf stage; oats and barley are very similar. We had a late break for Tasmania, so it’s going to be a long winter for us.

We will rely heavily on our canola for winter feed for livestock. In the end, we probably had a nice amount of rain, but it came late, so everything was rushed. I’d say now we are in a fairly comfortable position. The rain probably wasn’t so late as to be detrimental to most of the dryland crops.

We’ve planted about 100ha of wheat, a small amount of barley, 120ha of ryegrass, 15ha of beetroot seed and 35ha of chicory seed. About 100ha of canola was sown in staggered stages, with the last section being sown about 17-18 April.

We had a run of frosts in the couple of weeks around the start of June. We’re starting to see some redlegged earth mite activity, so we will need to monitor that. The dry conditions during that period also kept slugs at bay in most paddocks.

We are now doing post-emergent spraying for broadleaf weeds in the dryland canola, which is being grazed after meeting withholding periods. We’re also doing a lot of fencing, fixing up yards, general machinery maintenance, as well as the post-emergent spraying. Stocks of feed have been shipped to cleaning facilities. And we have lambed about 1000 ewes, with the main lambing still to take place in August.