Putting a value on legume legacies

Putting a value on legume legacies

Mr Swan said the only two options to stabilise the decline were to add more legumes into the system or apply more fertiliser.

He pointed to a 2012 study that predicted the increase in nitrogen fertiliser needed to maintain a wheat crop of four tonnes a hectare on red Mallee soil between 2017 and 2067, assuming organic nitrogen continues to mineralise.

The study demonstrated that if fertiliser rates increased to maintain yield as the nitrogen supplied from soil organic matter declined, fertiliser nitrogen costs as a percentage of gross margin would need to rise from nine to 10 per cent to about 14.8 per cent by 2037 and 17.5 per cent by 2067 (see Table 1).

Table 1: The increase in nitrogen fertiliser required to maintain a wheat crop of 4t/ha on red Mallee soil between 2017 and 2067 as soil organic nitrogen levels decline.

When it comes to improving the amount of nitrogen fixed by legumes, Mr Swan said it hinged on several factors:

“Other important issues are to make sure there are no subsoil constraints, avoid planting legumes on paddocks with high levels of existing mineral nitrogen and to ensure there are no residual herbicide effects that can impact growth,” he said.

“Also consider the end-use planned for the crop – such as grazing, hay, brown manuring or grain production – because it also has a big impact on the amount of residual nitrogen left for the subsequent crops.”

Overall, he said, 80 per cent of legume crops fix more nitrogen than is removed at grain harvest, so they will leave some residual for the following crops. The amount they leave is affected by:

“Higher rainfall between the end of the season and the start of the following growing season will result in more organic nitrogen converted to mineral nitrogen,” he said.

“The more biomass you grow, the more likely there will be a higher amount of nitrogen fixed.”

“Soils with acid subsurface layers can kill rhizobia, which may mean legume crops do not fix nitrogen from the atmosphere and may even require extra urea to grow,” he said.

“Repairing your subsoil constraints before sowing legumes is paramount to maximise the nitrogen fixation that legumes provide to the farming system.”

“We almost always saw a positive grain yield benefit following legumes even when we applied extra urea to the cereals,” he said.

“If we factor in the extra canola grain yield at a value of $650/t, you can see – on average – we are looking at an extra $143/ha when a legume is grown before canola,” he said.

“Having a legume before canola was, therefore, worth in total an extra $237/ha in terms of extra income from both the improved canola yield and urea saved.” 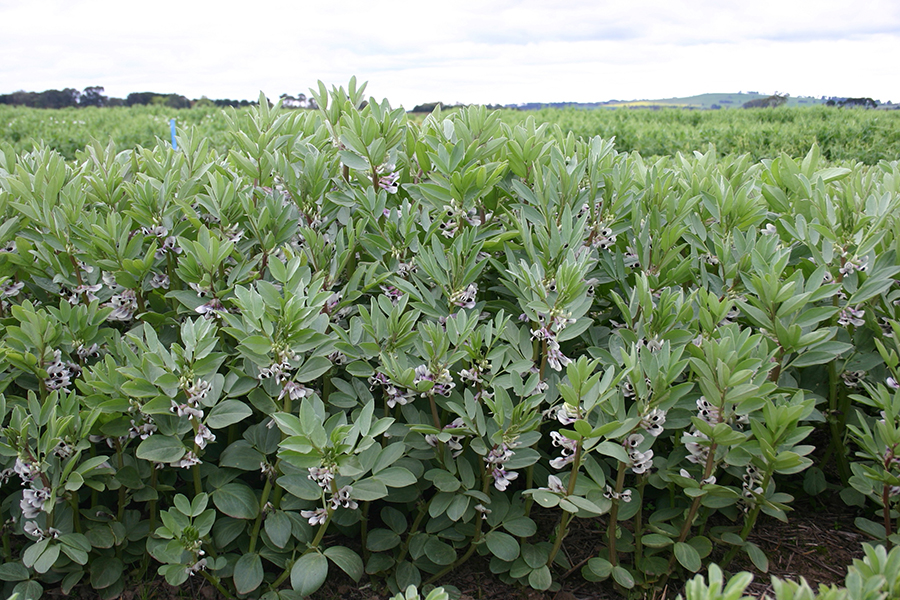 Faba beans yield well at Urana because they tend to tolerate waterlogging better than other legume crops. Photo: Penny Riffkin

CSIRO Agriculture and Food senior experimental scientist Tony Swan said a benefit of legumes was the capacity for large-seeded legumes to emerge from two years of heavy cereal/canola stubble.

“If you have 12 tonnes of stubble sitting on the ground, a legume can be planted into the residue, potentially transforming that cover into humus if there is sufficient phosphorus and sulfur in the soil,” he said.

He said grain yields at Greenethorpe were 6t per hectare in continuous wheat, while wheat sown after a double break of legume/canola yielded almost 10t/ha.

However, controlling fungal diseases in the legumes was a significant task in the wet seasons of 2020 and 2021.

In 2021, Mr Swan said 900 millimetres of rainfall at Greenethorpe assisted in Ascochyta blight spreading early throughout the season.

Ascochyta blight did not affect the chickpeas as early as it did at Greenethorpe and was well controlled at Wagga Wagga, leading to good grain yields.

“Faba beans have yielded particularly well at Urana on a vertosol soil with a high water-holding capacity. They tended to handle the waterlogging in 2020 and 2021 much better than other legumes,” he said.

Dr Kirkegaard said that in dry spring seasons, legumes leave about 20 to 50mm more water at depth than wheat or canola because of their shallower root systems and smaller biomass.

“Water rather than nitrogen seems to have a bigger legacy effect in drier seasons,” he said. “However, nitrogen legacies tend to be large in wet seasons.”

In average seasons, he has observed legacy effects from water and nitrogen. The trick, he said, was capitalising on that with timely sowing and effective management of the following crops.

Mr Swan said ameliorating acid soils with lime and ensuring seed treatments such as P-Pickle T did not affect rhizobia activity were critical.

“We slurry inoculate our legume seed twice and ensure we sow within four hours of inoculation,” he said. “We also buy fresh inoculum each year.”