If you had to pick the perfect spot to grow legumes, Wimmera grower Tim Rethus reckons he has found it.

With his brother Luke, their father Geoff, and farmhands Glenn Pietsch and Dale Sluggett, Tim farms 5000 hectares spread across properties at Vectis, Jung and Noradjuha, in the central and southern Wimmera region of Victoria.

The family has grown pulse crops since the 1980s, starting with field peas, before moving into chickpeas, faba beans and lentils. Even the Buloke trees that are native to the region have the capacity to fix nitrogen.

“It’s a great environment for growing almost all the winter grain legumes,” Tim says. “We are quite happy to grow them based on profitability, so it’s quite typical to see more than one-quarter of the farm covered in legumes.”

Tim says they normally sow up to 45 per cent of the cropped area to pulses – for grain, brown manure and hay – as part of their risk management strategy, which focuses on building soil health to produce healthy crops while conserving soil moisture and reducing weed pressure.

But being able to grow a good pulse crop is only part of the story: understanding the market, growing what buyers want and proper handling of grain are also crucial for ensuring the best returns.

The Rethuses grow more lentils than any other grain legume. It is Tim’s favourite crop type due to reliability and ease of management, harvesting and storage. Some of the gloss has come off in recent years, however, with prices falling because of increased production in areas where they were not traditionally grown.

“When it’s a great year in the Mallee, they can grow a colossal amount of lentils,” he says. “I would say the long-term average price is $650 to $700/tonne in the Wimmera, but it has been going down to $300/t. New growers have entered the market and tightened the margins, and this has led to farmers turning to faba beans.”

Tim recommends starting with “100 per cent clean” seed to prevent weed blowouts, such as vetch in lentils, which can cost growers dearly in terms of yield and price penalties at delivery, while creating a weed problem that can take seven years or more to eradicate because of the hard seed produced by vetch.

“Cleanliness of seed is critical,” he says.

“You are penalised for vetch seed contamination. Pretty much everybody gets penalised for it because they can’t control vetch in lentils; they are two very similar plants. We were picking our cleanest paddock but finding vetch in the furrow, so we knew that it hadn’t been cleaned out properly. It’s critical to make sure you’ve got very clean seed when you start.”

When using a mobile seed cleaning unit to clean seed before sowing, Tim suggests farmers double-check the operator is running it slowly enough through the right screens to do the job properly and remove weed seeds. Professional seed cleaning costs about $30/t.

For extra assurance, Tim sends his seed to Kalkee processor PB Seeds for cleaning to export grade before sowing.

“They will run it through twice if they’re not happy with it,” he says.

“And it seems to have resulted in a decrease in our vetch population over the years, which is great. If we can get the seed bank of vetch down, eventually it will be eradicated – but if we just keep resowing it, we’re never going to get on top of things.” 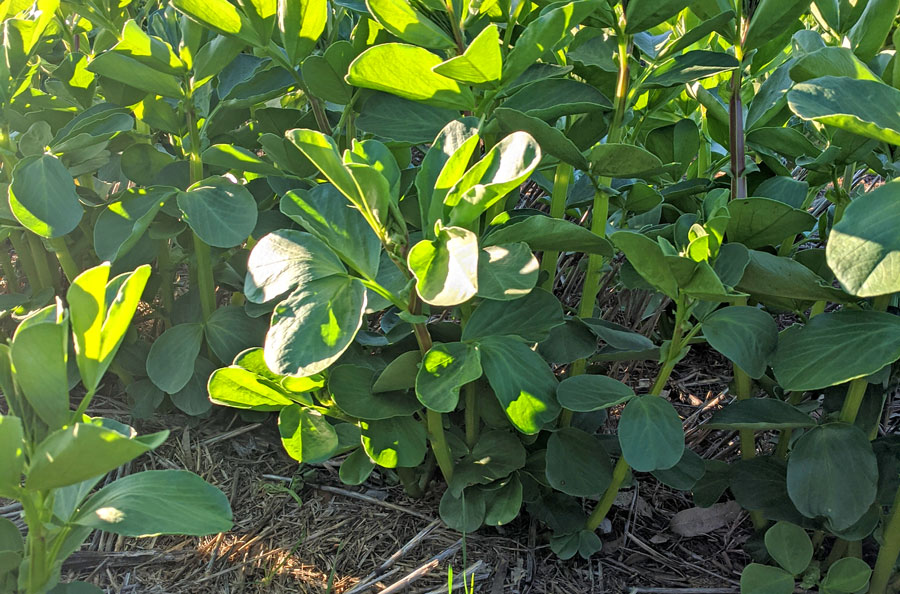 Tim urges growers who are new to legumes – especially those taking part in the GRDC Southern Pulse Extension project discussion groups – to look at the big picture, rather than making decisions about what to grow solely on the basis of yield and price in a single year. Other benefits include increased soil nitrogen, better soil health, access to a different spectrum of herbicides and the ability to rotate mode of action groups.

“Everyone will tell you that the cereal crop always goes better after a legume, so you’re getting benefit out of that as well,” he says.

“You can chemically feed your wheat with fertiliser, but nothing is better than having that nitrogen deposited throughout the soil structure rather than just throwing it on the top and then hoping for the rain.

“We like to try and grow crops that self-manage, that are healthy and can fight off disease and compete with weeds ... crops which can also send roots down into nice friable soil that is not compacted and find nutrients. Legumes are great because they’ve sent their roots down the year before and put nutrition throughout the profile.”

The Rethuses moved out of sheep about 20 years ago when livestock was less profitable. They have since developed a name for innovation in cropping and as early adopters, embracing no-till, controlled traffic, precision discs, shielded sprayers and high-tech data collection systems. 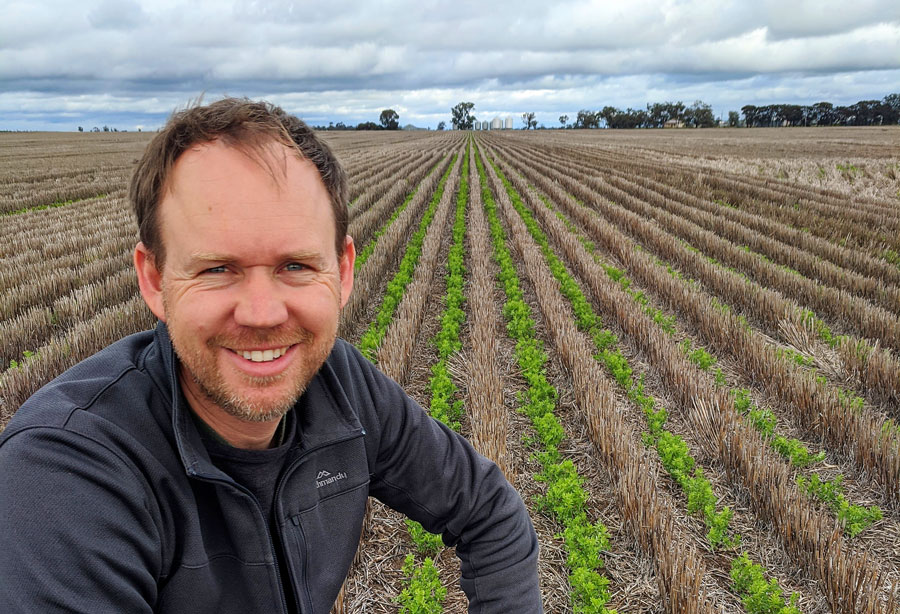 Tim Rethus in a paddock of lentils in early 2020. Lentils have been a strong success story for Tim and his family. Photo: Courtesy Rethus family

“Lentils are not a very strong plant and the straw acts as a trellis to stop them from slumping,” Tim says.

“That means they will grow up and sit on top and when it comes to harvesting you can get under the pods a lot easier and harvest a lot faster. That’s a big plus for us. And that’s why we go to the effort of inter-row sowing, on controlled-traffic tramlines.”

Tim says the only problem with their system is the canola and barley often ripen at the same time as lentils and can put stress on harvest planning. Lentils must be harvested first to maximise quality and yields because they are prone to losses and damage from wind and wet weather. On the other hand, freshly harvested lentils can be sold directly from the farm gate or stored for extended periods in sheds or silos.

“Forward contracting lentils is a good thing to do early on when the price is strong,” Tim says.

“And often those can be delivered direct which is nice. Generally, the proposition with lentils and chickpeas is you store them. As long as cash flow is okay, they’re a non-perishable product – essentially a bank deposit waiting for the price to correct.”