Local agronomist James Cheetham from Delta Agribusiness showing the size of the crop at the start of flowering.
Photo: Peter Brooks

To put it mildly, a record high canola yield was a turning point for the Hawkins family’s mixed-farming business at Oberon, New South Wales. Just a year earlier, the farm was in the grip of drought.

It amplifies the achievement of a 7.16-tonne-per-hectare yield for which they credit sound research, great environmental conditions and hard work. However, the real story, says Peter Brooks, who manages the ‘Mayfield’ farm, is the research and extension behind CSIRO’s dual-purpose canola cropping system, backed by GRDC investment.

“In 2019 the farm was in drought and practically a dustbowl,” Peter says. “So, this is beyond our wildest expectations. We had great conditions in 2020 but achieving this yield was a culmination of 15 years of working with CSIRO to improve our systems.

“We followed what the science said we should do to improve our enterprise, and last year it all came together.” 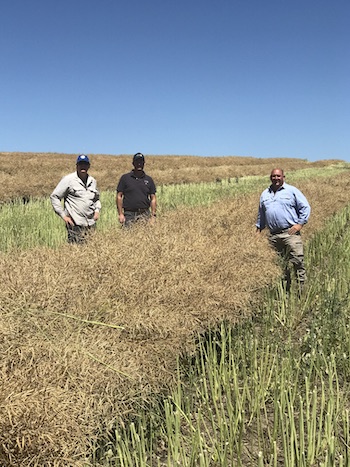 Mayfield farm manager Peter Brooks (right) says it is important to have a good network of people involved and credits CSIRO’s John Kirkegaard (left) and agronomist James Cheetham from Delta Agribusiness (middle). “They are part of the system as well.” Photo: supplied

Dual-purpose crops can be both grazed by livestock and harvested, reducing the need for additional off-farm feed while resting pastures. This allows a farm to better use its on-farm resources, without depleting them – enabling quicker recovery from events such as drought.

For the researcher behind dual-purpose canola, CSIRO farming systems researcher Dr John Kirkegaard, what made this record crop extra special was twofold: “That the crop had about 20 lambs a hectare grazing it for eight weeks earlier in the growing cycle is special, but so is the relationship Peter and I have built over the past decade or so working on dual-purpose canola,” he says.

“An event like this is a mixture of bold science meeting excellent agronomy, and brave farming to push the envelope.”

Peter says Dr Kirkegaard and his team’s research has been transformational. “In the years ahead, it will be thought of in a similar way to other big on-farm changes, like chemical fallowing.”

He remembers meeting Dr Kirkegaard at a field day about 12 years ago. Keen to try dual-purpose canola, Peter started a trial and kept in touch with John, calling to give him updates and ask questions. “It’s been a real collaboration.”

Dr Kirkegaard agrees. “Despite that early trial ending in 2012, we kept in touch. Peter with questions and reports of successes and failures, and me with queries on what the next research issues were.

“Through it all Peter followed the science and stuck with the system, despite some very tough drought years. He is a true pioneer who uses science and evidence to try things, but then refines it to make it practical. It is that combination that is so valuable, and why research should not be divorced from development and extension – we should work together.

“Farmers who follow opportunities based on science and evidence and keep challenging the researchers with questions and feedback to refine the system are very important.”

The ‘magic’ occurred in a 33ha long-term pasture paddock with feedlot cattle. It had not been cropped in living memory. 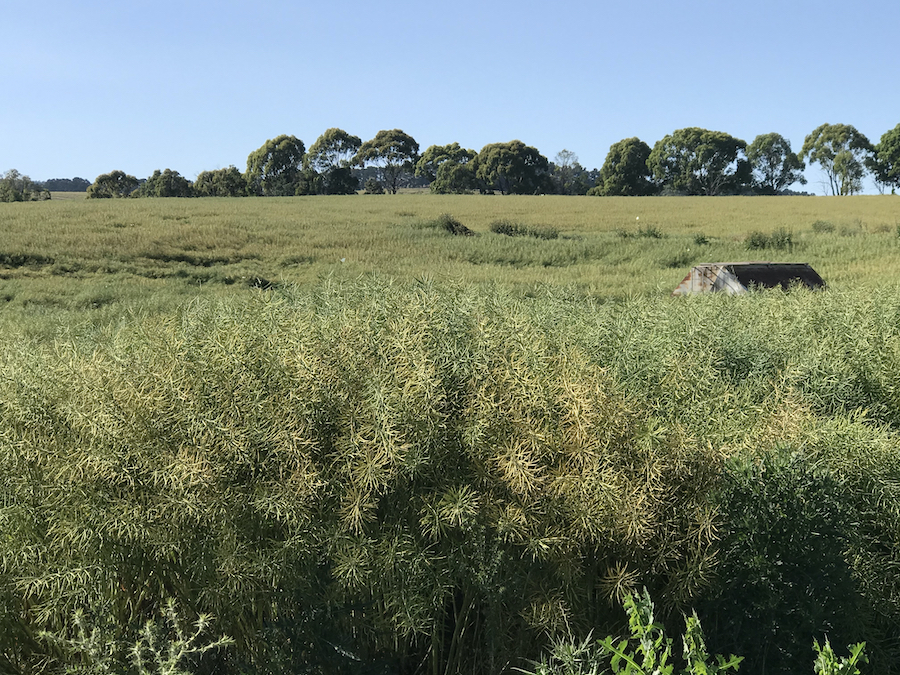 The Mayfield crop just before windrowing. The crop was windrowed on 7 December 2020 and harvested on 14 January 2021. Although farm manager Peter Brooks says that even if he achieved 60 per cent of this yield next time, “it would be some result”. Photo: Peter Brooks

Dr Kirkegaard says the soils, derived of basalt, have good natural fertility. “And the long-term pasture history of the ‘Mayfield’ site meant there was an abundance of this natural fertility to support crop growth through the season.” 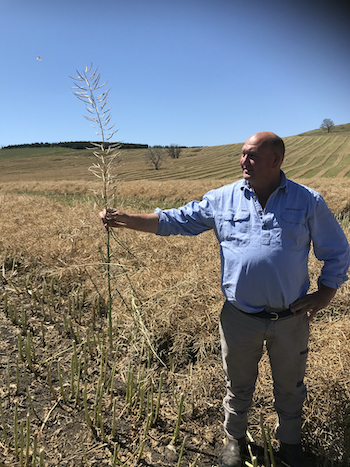 Although Peter says the achievement occurred in a “freak” year, the concurrence of events shows what can be achieved. “Even if we achieved 60 per cent of this next time, it would be some result.”

Peter is meticulous about being organised ahead of each season. “Every step in the process is important. We have a crop recipe and that starts before sowing. For us in the high-rainfall zone, quite often harvest and sowing occur in the same week, so we need to be organised.”

He also says it is important to have a network of people involved. “For us, that has been John and our local agronomist James Cheetham from Delta Agribusiness. They are part of the system as well.”

Trial and error over the years has also shown that the correct sowing system is vital. Peter says the Seed Hawk “allows us to sow at the correct depth, which is really important for early sowing. The seed has to find the moisture and we can sow to 25mm with it.

“The seed will then germinate and, once that happens, the plant is hard to kill. If you get a variable sowing depth, it’s going to struggle. We found out a lot of this by mistake.”

“Conditions were great. The season was ideal for growing high-yielding temperate crops such as canola and wheat. Rainfall provided an early sowing opportunity in February and a long growing season to early December.

“The area experiences cool and sunny conditions during the critical period of yield determination during the flowering period when the number of grains is set. The high and evenly distributed rainfall supports the long cool, grain-filling period.”

Dr Kirkegaard says that high radiation and cool temperatures during the critical period mean a longer period to set grain and lots of photosynthesis to support grain set.

“This ‘photothermal quotient’, or the ratio of radiation to temperature, for this area is among the highest in Australia, generating high yield potentials. So, provided damaging frosts or heat are avoided in this period, and the rainfall is adequate, a yield potential of up to 8t/ha was possible last year, and up to 9t/ha is theoretically possible.”

Agronomist James Cheetham says the crop recovered well from grazing and the ideal growing and grain-filling conditions set it up well for harvest.

He says dual-purpose crops play an important role in mixed-farming businesses and have become popular in the past five to 10 years. The fact that this high yield occurred in a region where canola is uncommon could provide inspiration for others to grow dual-purpose canola.

“Dual-purpose crops help farms to manage their livestock during drought, due to the extra autumn and winter feed, often grown on stored fallow moisture. Growers can make money by fattening young stock, while allowing other pasture paddocks to be spelled, instead of being over grazed.”

An economic analysis of dual-purpose cropping found that businesses can benefit by $100 to $200 per farm hectare due to grain income and increased autumn and winter grazing while pastures are spelled.

For Peter, the years 2017, 2018 and 2019 were some of the toughest on record. “But we managed to get returns from the grazing system. It shows the resilience and agility of the system.”

Recounting those dry seasons, Peter says a thunderstorm in late summer allowed canola to be sown. “That then produced about 4000 to 5000kg of dry matter a hectare, ready to graze in March. We bought lambs in and could put 18 to 20 lambs a hectare on. Drought also meant we received good trading terms on those lambs – selling them for $70 to $90 each.

“The point is that we could grow feed early and were able to go into a market that was a bit depressed and get us through the drought. So, some years grazing will be the main source of income and in other years it will be grain. This system allows that agility.”

Peter says a decision can be made in August or September about whether to take canola through to harvest. “If you decide to harvest, there are costs – fungicide, pesticide, the cost of harvesting and windrowing – which can add up to $300 to $400/ha. If you are only going to get a 1.0 to 1.5t/ha harvest, you need to make those difficult decisions. In 2020, we had a full profile, so we knew it was going to be good all the way through.”

Work on dual-purpose crops is now embedded in the GRDC farming systems trials in southern NSW.

The previous Australian record saw a Tasmanian farmer harvest 6.17t/ha in 2017. In 2020, an English farmer recorded 7.19t/ha, but at higher moisture content (nine per cent). The NSW canola (7.16t/ha) was delivered at six per cent moisture. “That means we can justifiably say we have exceeded the previously reported world record from the UK,” Dr John Kirkegaard says.