Experimental plot trials have demonstrated the potential for spring-sown barley yields to push above 10 tonnes per hectare in Tasmania.

This is the preliminary finding of a national trial program spanning five states as part of the GRDC-invested hyper-yielding crops (HYC) project, led by Field Applied Research (FAR) Australia.

The HYC project from 2020–24 aims to identify germplasm for high-performance cultivars and develop agronomic strategies that can help optimise the productivity and profitability of barley, wheat and canola.

The barley trials, sown on 1 September in north-central Tasmania, averaged 10t/ha and an experimental line from Europe - Laureate - yielded up to 11.42t/ha, Dr Porker says.

The record yields were achieved in above-average rainfall conditions, with the crop receiving about 310 millimetres during the growing season from September to January, as well as 80mm of supplementary irrigated water.

Dr Porker says the early trial findings have recast spring-sown barley as a high-yielding sequencing option, suited to the enterprise diversity in many Tasmanian farming systems. “It has a strong fit with irrigated crop rotations in Tasmania,” he says. For example, spring-planted barley can be grown as a summer crop that is harvested in January or February. This means there is opportunity to grow another crop, such as autumn-sown fodder, in the same year.

“It is also a cheaper option than autumn-sown barley,” Dr Porker says. “This is because the growing season for spring-sown barley is shorter and there is less disease pressure, allowing fungicides to be applied at lower label rates.

“There is also less evidence of widespread lodging and improved grass weed control.

“We found that spring planting can yield more than 10t/ha in a short growing season – about four to five months – with reduced input costs compared with autumn planting.”

The growing season for autumn-sown barley, which is often planted from late April to May and harvested in January or February, is about nine to 10 months.

“The trials have clearly demonstrated that spring-sown barley has the same yield potential as autumn-sown barley,” Dr Porker says. “But spring sowing has the added advantage of reducing disease pressure and lodging which, in turn, reduces expenditure on fungicide and plant growth regulators.”

Dr Porker explains that there is less time for disease to develop or lodging to occur since leaves develop more rapidly and there is less vegetative biomass as a consequence of the crop’s short growing season.

For example, the first year of trials at the Hagley site showed growers could achieve high spring-sown barley yields by applying fungicides at low label rates from growth stages 30 to 39.

“The spring-planted trials also showed growers can apply more of the crop’s nitrogen requirements early in the growing season.

Another benefit of spring-sown barley is “more flexibility in herbicide-resistant grass weed control”, he says. The crop allows growers to use herbicide chemistry with different modes of action and active ingredients, effectively reducing herbicide resistance risk.

“Our aim was to provide the tools that would enable growers to turn spring-sown barley into a 10t/ha crop by focusing on optimal combinations of germplasm, phenology and agronomy.” Of these approaches, barley germplasm has a major influence on the crop’s yield potential.

He says the RGT Planet cultivar and new barley germplasm from Europe have, to date, provided the most significant yield lift.

“This is mainly due to the pattern of crop development in RGT Planet and European germplasm,” Dr Porker says.

“The best performing cultivars were less responsive to photoperiod (day length), which is an important genetic trait suited to spring-sown barley cropping in Tasmania.

“This contrasts with much of the commercially available Australian barley germplasm that is suited to autumn planting.”

He says Australian barley germplasm is typically responsive to photoperiod, especially increasing day length during summer. As a result, the crop tends to rapidly advance to flowering without building enough vegetative biomass or grain to achieve 10t/ha yields. 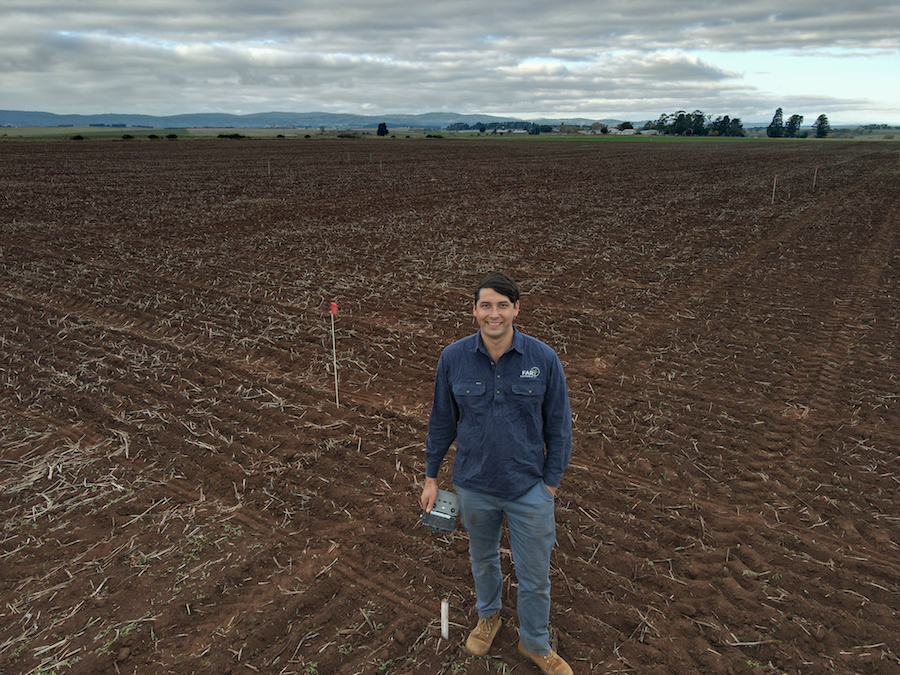 “There is plenty of solar radiation to promote growth during Tasmania’s spring and summer months. Average temperatures are also usually lower than many mainland cropping areas, which reduces the risk of heat stress,” he says.

Dr Porker says the FAR research team aims to build on the 10t/ha benchmark for spring-sown barley over the next three years of the national trials.

FAR Australia managing director Nick Poole is also leading research as part of the HYC trial program that is targeting yields above 12t/ha for autumn-sown wheat. In addition to the Hagley site, the trials are located at Gnarwarre, Victoria; Millicent, SA; Wallendbeen, NSW; and Green Range, WA.

The research led and managed by FAR Australia is being run in collaboration with Brill Ag, CSIRO, WA’s Department of Primary Industries and Regional Development, the Centre for eResearch and Digital Innovation, the South Australian Research and Development Institute (SARDI*), TechCrop and four farming groups. These are Southern Farming Systems, Stirlings to Coast Farmers, MacKillop Farm Management Group and Riverine Plains Inc.

The HYC awards program, managed by HYC extension coordinator Jon Midwood from TechCrop, is another important component of the research project.

The awards evaluate the yield performance of growers’ wheat paddocks and identify agronomic practices to help achieve high yields in variable on-farm conditions across the country.

“The HYC awards enable growers to benchmark the agronomic performance of their wheat crops compared with aspirational potential yields that could be achieved in each region,” Dr Porker says.

More than 50 wheat crops stretching from WA to Tasmania were entered in the 2020 HYC awards.

Results of the inaugural awards, including winners of two main awards, will be covered in the GroundCover™ September-October edition. The award categories, with two growers announced for each region, are ‘overall highest wheat yield’ and ‘highest wheat yield based on percentage of yield potential’.

*SARDI is a research division of Primary Industries and Regions South Australia (PIRSA).