Associate Professor Glenn McDonald and Dr Rhiannon Schilling have been working to identify tolerances of different breeding lines of wheat to a number of traits.
Photo: Alistair Lawson

Two grains industry professionals are cautiously optimistic about the difference advanced pre-breeding wheat lines could mean for those growing grain in sodic or dispersive subsoils.

The project is also assessing advanced lines selected by Dr Darshan Sharma from the Western Australian Department of Primary Industries and Regional Development from germplasm developed for sodic soils by the late Professor Tony Rathjen.

Dr McDonald says the advanced germplasm was bulked-up at Roseworthy in South Australia in 2020 and was also grown in trials in Queensland, New South Wales, SA and Western Australia. In addition, the project has made new crosses using current varieties.

“Some of this material has produced a five to 10 per cent improvement over current commercial varieties, which is good news,” Dr McDonald says.

“But further tests of the lines are needed to quantify their performance and water use on a wider range of soils.”

The new genetics, when incorporated into wheat lines developed by Australia’s major wheat breeding companies, could lift returns for those growing grain on difficult-to-manage sodic subsoils.

What is sodic soil?

A 2018 paper by the University of Queensland’s Dr Tom Orton and colleagues, published in Land Degradation and Development, estimates the lost opportunity associated with sodic soil for Australian wheat production to be costing $1.3 billion a year.

Dr McDonald say the best way to overcome the problem of sodic soil is with improved management and better varieties, and in this respect the development of sodic soil-tolerant wheat germplasm is important.

“Our aim has been to develop new germplasm to tolerate multiple soil constraints, so future varieties yield well when planted into soils with sodic subsoils across multiple seasons,” he says.

“Specifically, we have looked for tolerance to high boron, high pH and high aluminum, (plus) the ability of roots to grow through dense soil and waterlogging tolerance.”

The first step was to contact Australian wheat breeding companies to find out which varieties they considered to be tolerant to these constraints.

Initially, Dr McDonald and Dr Schilling hoped a list of varieties would be supplied with various tolerances to one or more constraints, which would subsequently be crossed to ‘pyramid’ or stack the genes of tolerance to multiple constraints into pre-breeding lines.

Nonetheless, most plant breeders were unaware just how tolerant their varieties were to the key constraints of sodic soils. The exception was boron, which has a reliable genetic marker.

“We don’t have molecular markers for most of the soil constraints we were interested in,” Dr McDonald says.

“To characterise wheat lines and varieties for their capacity to grow well in sodic soils, we selected 50 varieties from lines nominated by breeders and screened them to see how they responded to the various sodic subsoil stresses. We also grew these lines in a series of national field trials.”

Much of the screening work was done in Adelaide under controlled conditions in glasshouses to determine the relative tolerances of yet-to-be released wheat lines and commercial varieties.

Then, from 2015 to 2017, a team of researchers was deployed across Australia to compare the growth and yield of the 50 bread and durum wheat varieties and lines at sites with sodic subsoils. As well as grain yield, measurements of biomass, leaf nutrient concentrations and water use were made on selected varieties.

More intensive work was done in SA over three years. More than 800 soil cores were taken in SA each year to a depth of one metre to measure water use and root growth in varieties that differed in their degree of tolerance to sodic soil constraints. 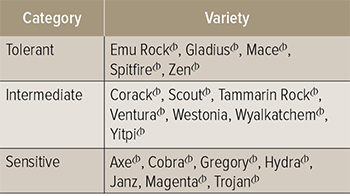 The project has taken a multi-pronged approach to developing new germplasm that can be used by plant breeders.

Dr Sharma selected lines developed by the late Professor Tony Rathjen in a previous project on sodic soils. These crosses were based on local and overseas varieties that had tolerance to sodic soils and some of the best lines have yielded well on sodic soils.

The project also looked at new sources of tolerance. Part of Dr Schilling’s work involved screening 200 wheat lines collected from around the world through the Focused Identification of Germplasm Strategy (FIGS).

Within this material, she found some lines with improved root growth at high pH when compared against the performance of Mace (PBR) and Scepter (PBR).

To develop wheat lines with tolerance to multiple sodic subsoil constraints, Dr Schilling and her technical officer Lucy Porter crossed a range of material arising from the extensive screening program.

By 2020, these crosses were at an advanced stage (F6) and were grown at a sodic soil site at Roseworthy, SA.

“We’ve had some promising results from these lines developed in this project, but we don’t yet know if they are better able to extract water from sodic subsoils across a range of locations,” Dr Schilling says.

She sees potential for this material to improve growers’ wheat yields in the future when plant breeders incorporate the germplasm into their own lines and release new varieties better adapted to sodic subsoils.