Clay spreading during the preparation of the field trial near Moora, WA, in 2016.
Photo: DPIRD

Water repellence is a widespread problem, particularly in the medium to high-rainfall zones of Western Australia where it mostly affects soils with low clay content or high waxy plant residue levels in the topsoil. The prevalence of water repellence appears to be increasing due to the rise in cropping frequency, drier and earlier sowing, minimum tillage and diminished opening rain at the start of the season.

For example, GRDC-invested research conducted by the Department of Primary Industries and Regional Development (DPIRD) in WA showed that in the dry 2017 growing season, the improvement of germination and early plant establishment of lupins, arising from a combination amelioration approach of tillage and claying in a water-repellent soils, were major factors driving higher grain yield of lupins (Figure 1).

Figure 1: Early plant establishment was the major factor contributing to grain yield of lupins in the drier-than-usual 2017 season at a research site in the medium-rainfall region of Western Australia. Source: DPIRD

Other problems associated with SWR include induced nutrient deficiency of soil-immobile nutrients such as phosphorus, manganese, copper and zinc. However, nutrient deficiency due to SWR is often transitory and disappears when, eventually, the topsoil becomes evenly wet after several rainfall events.

Confirmation of soil water repellence can be determined in the field using the water droplet penetration test on dry soil, often in late summer or early autumn, prior to seeding. With this method, a few millimetres of surface soil is scraped away and droplets of water gently placed onto the soil. If it takes longer than 10 seconds for the droplet to penetrate the soil it is considered repellent.

Topsoil water repellence is a significant constraint to seed germination that may require management when the penetration test exceeds 60 seconds.

The most common long-term approaches for removing, or significantly reducing, SWR are strategic (one-off) amelioration. In general, strategic soil amelioration approaches fall into two categories based on their effect on the topsoil:

When done in the right conditions and with the right method, the addition of clay-rich subsoil provides a long-term, possibly permanent, solution to soil water repellence. - DPIRD researcher Dr Giacomo Betti

With claying, further incorporation of the clay-rich subsoil is necessary so the two approaches are often combined. While soil amelioration by deep tillage aims to bury and dilute the repellent topsoil to depth, the incorporation of clay-rich subsoil into water-repellent topsoil overcomes repellence in the long-term by increasing the surface area of the soil thanks to the smaller clay soil particles, which allows more effective infiltration.

Both approaches can be effective at reducing SWR (Figure 2). An additional benefit, for which there is data from both South Australian and WA experiments, is a reduction in crop frost incidence in frost-prone areas resulting from strategic deep tillage.

Figure 2: The effect of strategic tillage on the severity of water repellence, combined with different rates of clay spreading, and assessed by the molarity droplet test (MED). Source: DPIRD

Claying has been practised in the Australian broadacre farming system for more than three decades - and for a good reason. When done in the right conditions and with the right method, the addition of clay-rich subsoil provides a long-term, possibly permanent, solution to SWR.

In comparison to tillage only, additional benefits associated with incorporating clay into the sandy topsoil are increased soil water-holding capacity and reduced wind erosion risk due to improved soil structure.

However, claying is expensive, with cost increasing substantially with rising rates, in combination with post-incorporation by tillage (Table 1).

DPIRD research in WA over three seasons and on three different soil types (deep pale sand, deep yellow sand and sandy gravel; see Figure 3) showed that in medium-to-low-rainfall areas clay spreading can contribute significantly to higher grain yield, but caution should be taken in these environments with regards to clay application rate and level of incorporation required (shallow versus deep).

Excessive rates of clay-rich subsoil, in combination with no or shallow post-claying incorporation, had little or negative impact on yields, especially during short, dry seasons such as occurred in WA in 2017 and, to an extent, 2018 (Figure 3).

Excessive clay-rich subsoil, combined with inadequate shallow incorporation, can reduce early plant establishment as a consequence of topsoil hard-setting. This can increase evaporative losses and reduce plant-available water near the surface as a result of the concentration of heavy soil.

Chemical analyses to assess the quality of the clay soil should also be considered in areas where excessive salt in the subsoil or a high level of boron may pose a risk.

When considering the high initial investment required for claying, soil amelioration by deep tillage (for example, rotary spader and mouldboard plough) can be more cost-effective (in the short to medium-term) in medium to high-rainfall zones than in medium to low-rainfall regions on suitable soils.

Other options that aid establishment despite still having SWR should be also considered. Of these, paired-row and near-row seeding are beneficial and cost-effective, particularly when the crop is dry-sown.

On duplex, texture-contrast soils that have a clay-rich subsoil layer within 60 to 80 centimetres, clay delving should be considered as a cheaper alternative to clay spreading. Clay delving has the additional benefit of improving subsoil root exploration thanks to the deep-ripping action of the delving tynes. 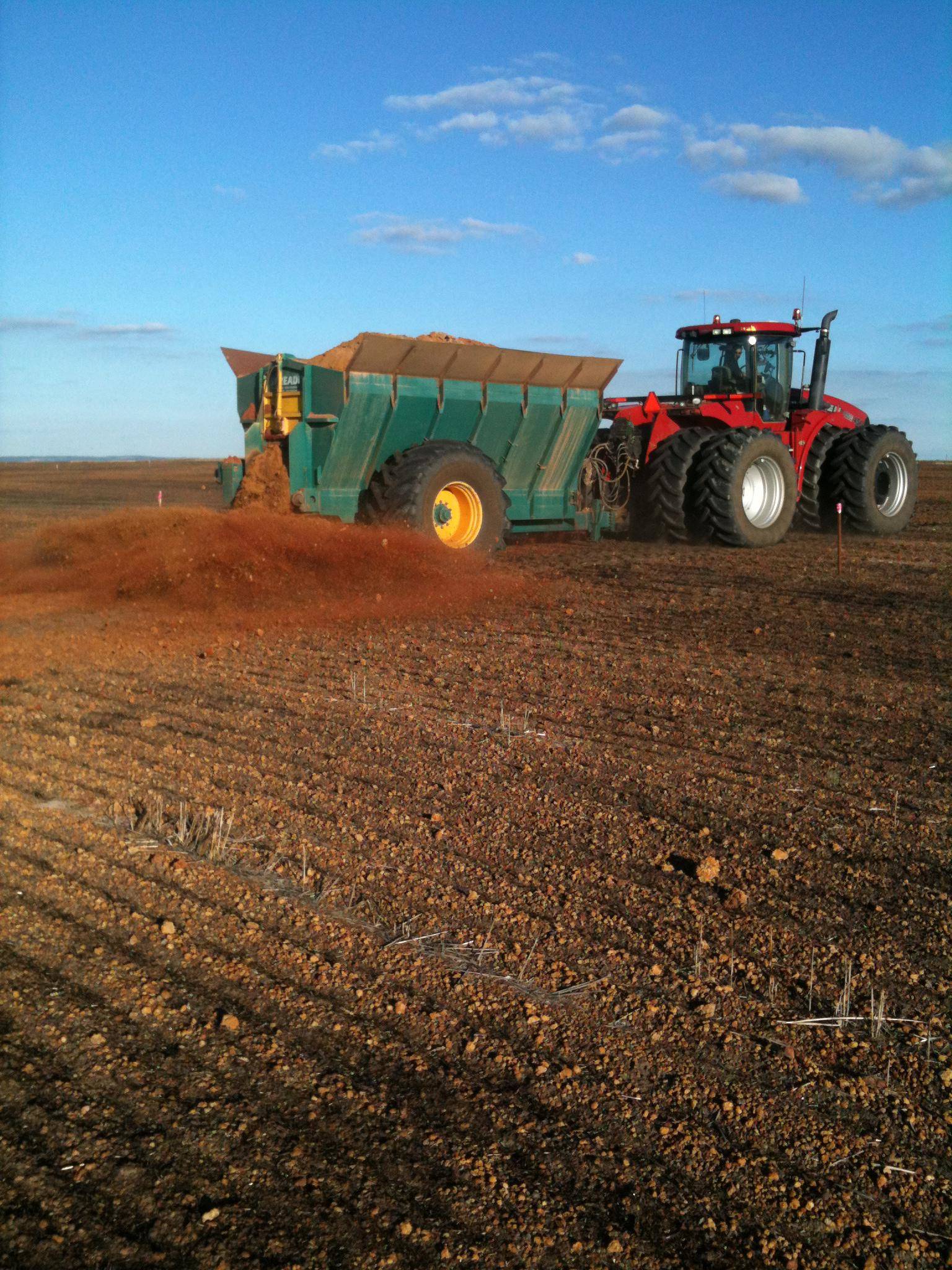 Clay spreading during the preparation of the field trial near Moora, WA, in 2016. Source: DPIRD

Claying is usually considered best-suited to medium to high-rainfall areas with higher crop and pasture yield potential, where the high expense can usually be recovered within a few seasons. However, research findings from medium to low-rainfall regions of WA indicate that clay spreading can also be cost-effective when combined with deep tillage (rotary spading) at rates at or below 150t/ha in deep sand and about 50t/ha in gravel sand, for spread subsoil that has about 35 to 40 per cent clay.

This is an important finding given that claying can increase the longevity of amelioration of water-repellent soils compared with deep-tillage-only approaches.

Further research to improve the understanding of the long-term impact of claying, in combination with tillage, on the productivity of water-repellent soils is continuing.