Productive legume-based pastures enable carbon to be taken from the atmosphere and stored underground via root movement through the soil.
Photo: Nicole Baxter

How well are you feeding the 'underground livestock' in your soils?

Research has cast new light on the amount of soil carbon that could be lost when switching paddocks from a long-term pasture phase to an extended period of grain cropping.

The findings of a joint Australian National University (ANU) and CSIRO study have important implications for farmers keen to maximise the profitability of their livestock and cropping enterprises, particularly when transitioning limed paddocks out of pasture.

Elizabeth Coonan, the ANU and CSIRO PhD student who led the work, says her research highlights the benefits of maximising pasture productivity to boost livestock returns and the profitability of subsequent grain crops.

"If you have not added enough fertiliser to your pastures, the soils into which your grain crops are planted will be low in fertility," Ms Coonan says.

"When it comes to transitioning poorly fertilised paddocks from pastures to crops and incorporating lime, you can avoid the risk of losing about one tonne per hectare of soil carbon by ensuring there is a balanced supply of nutrients according to the soil's needs." 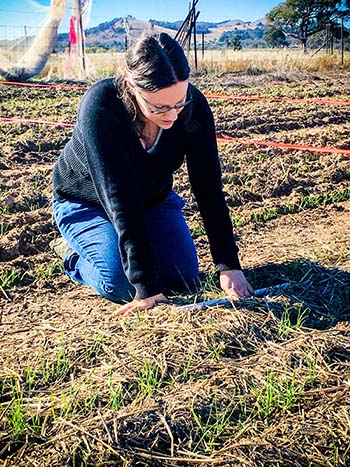 Elizabeth Coonan recently completed her PhD under the supervision of researchers from CSIRO and the Australian National University. Photo: Alan Richardson, CSIRO

A well-fertilised pasture not only lifts livestock productivity, she says, it also builds soil organic matter and plant-available nutrients, all of which are critical to increase the health of subsequent grain crops and the resilience of the farming system as a whole.

In explaining the role of organic matter, Ms Coonan says it is critical for improving soil structure and storing the nutrients plants need to grow and thrive.

But under cropping, she says, soil organic matter can decline substantially (see Figure 1). 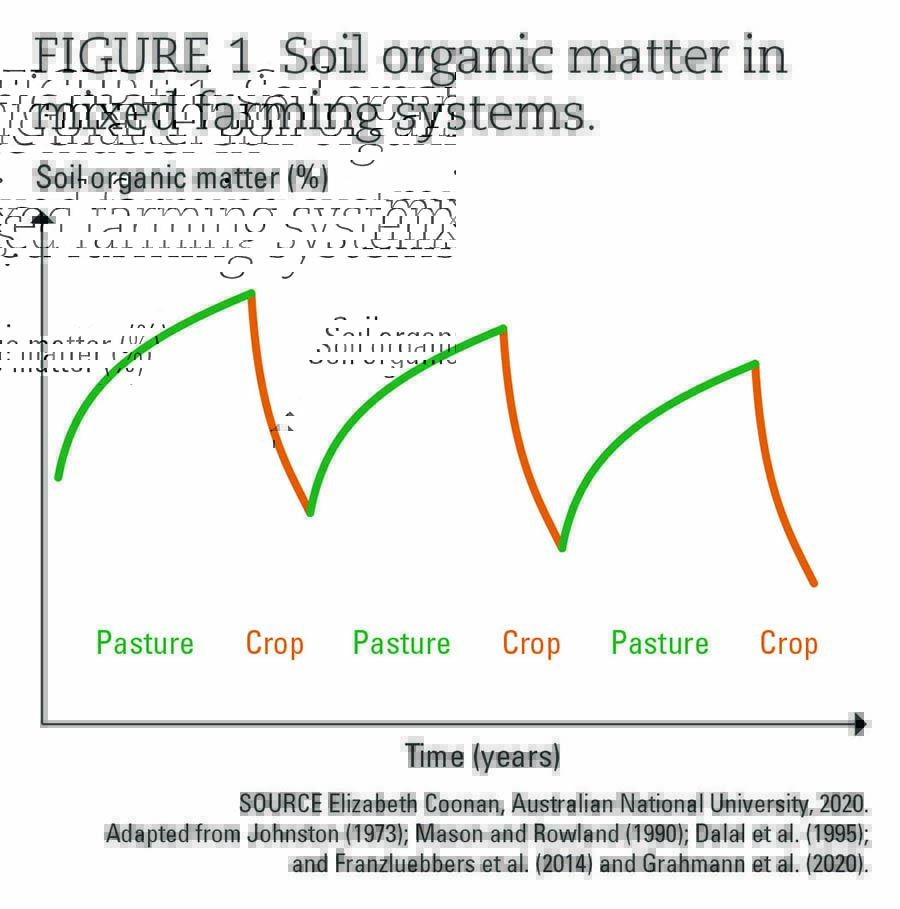 In general, growers and the scientific community expected the adoption of no-tillage and stubble retention to reduce soil organic matter losses over time.

Nonetheless, it was soon discovered that relying on these tactics, on their own, was less effective than initially hoped.

One of Ms Coonan's supervisors, CSIRO Agriculture and Food chief research scientist Dr John Kirkegaard, says data from his agency's long-term trial site at Harden demonstrates nitrogen is used by microbes for their growth (immobilised or tied-up) when carbon-rich residue such as cereal stubble is added to soil.

"If no mineral nitrogen is available in the soil, microbes break down existing organic matter to source the nitrogen they need," he says.

"As a consequence, many studies have shown crop yields in no-till stubble-retained systems are optimised with early applications of higher nitrogen inputs."

Dr Kirkegaard says only about five kilograms of nitrogen per tonne of wheat stubble is needed to avoid the impact of nitrogen tie-up on crop growth, but it needs to be applied to paddocks early in the season. 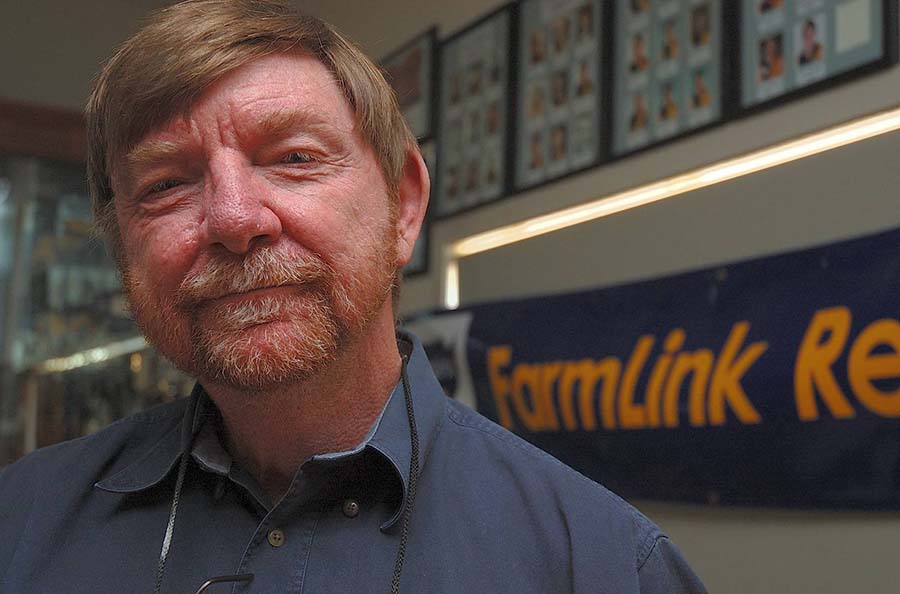 Knowledge on this topic was first reported by CSIRO Agriculture and Food's Dr Clive Kirkby.

For every tonne of wheat stubble present, Dr Kirkby's experiments showed soil microbes need 5.8kg of nitrogen, 2.2kg of phosphorus and 0.9kg of sulfur to efficiently convert the carbon in the stubble residue into fine fraction soil organic carbon.

Further, he demonstrated that if soil microbes do not have access to a balanced supply of plant-available nutrients, supplementary nutrients need to be applied as artificial fertiliser to prevent soil carbon decline in a continuous cropping program. In her own research, Ms Coonan has observed the importance of ensuring a balanced supply of plant-available nutrients to provide the resident soil microbes with the nutrients needed to grow and thrive.

She says a further benefit of a balanced supply of plant-available nutrients is that it helps retain dead microbial remains and waste products (detritus) in the soil as organic matter. 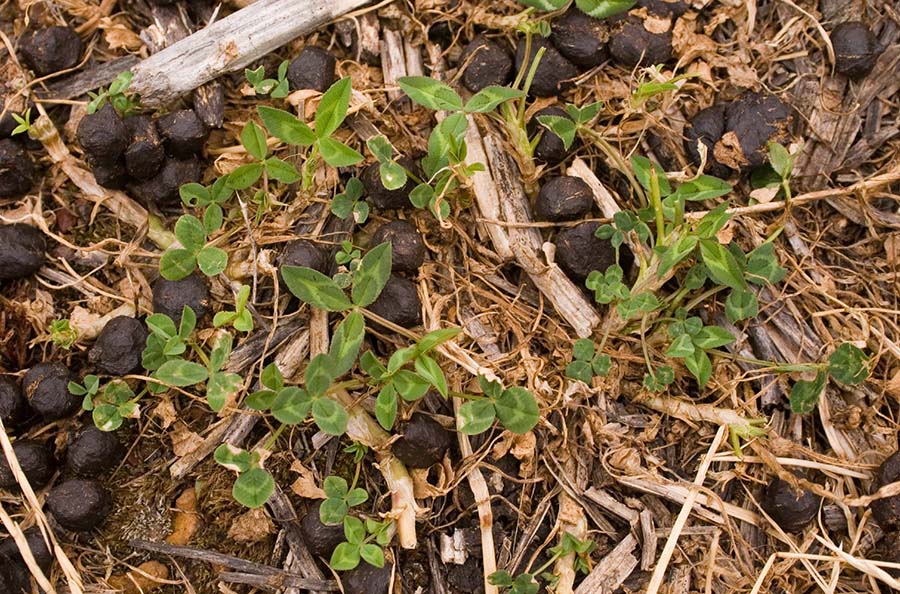 While a pasture phase enables organic matter to build as roots proliferate through the soil, Ms Coonan says a substantial amount of carbon is lost when paddocks are cultivated in the limed transition to cropping.

Nonetheless, research with co-investment from NSW Department of Primary Industries and GRDC, led by former NSW DPI soil scientist Dr Mark Conyers, shows pre-sowing incorporation of lime is not something to be feared.

Ms Coonan agrees, adding that the transition from pasture to crop is when lime is best applied and incorporated to reduce surface soil acidity.

But she explains that lime can contribute to a loss of organic matter because it creates a more favourable environment for the resident soil microbes, increasing their activity.

A consequence, is even further breakdown of soil organic matter because the resident microbes source nutrients from mineral supplies to sustain their growth. 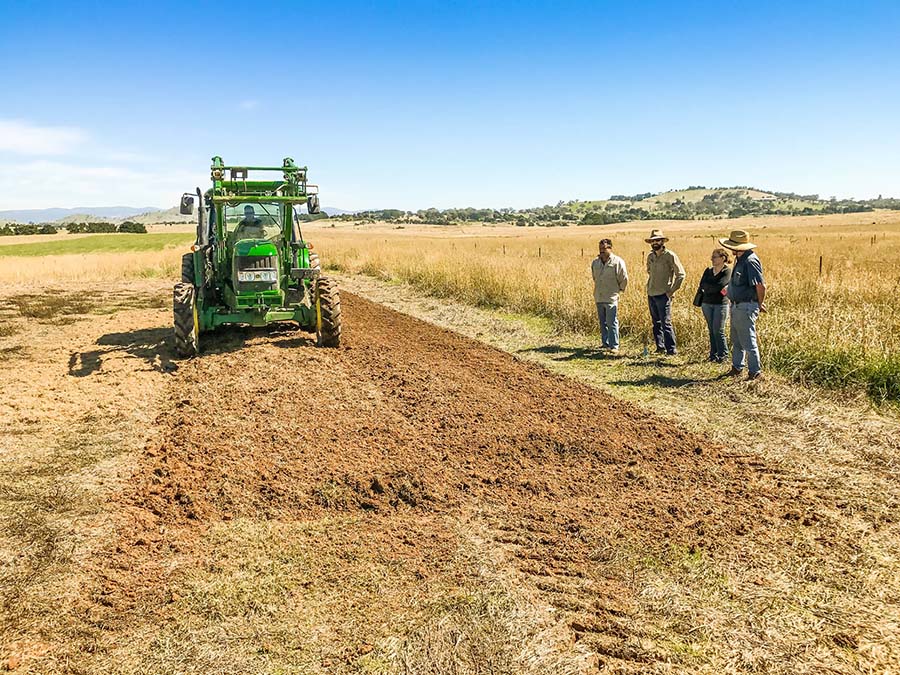 ANU and CSIRO PhD student Elizabeth Coonan, third from left, and other researchers setting up the trial for her two-year doctorate. A rotary hoe was used to mix pasture residues and lime through the topsoil. Photo: John Kirkegaard, CSIRO

She also investigated the effects of these treatments on triticale growth and harvested grain yields over two consecutive seasons. For her study, Ms Coonan used a long-term CSIRO pasture trial at Ginninderra, near Canberra.

CSIRO Agriculture and Food research agronomist Dr Richard Simpson had managed the land on which Ms Coonan's trial was located over 20 years with various phosphate-based fertilisers to produce high and low-fertility soils based on tested soil carbon, nitrogen, phosphorus and sulfur.

For Ms Coonan's research a rotary hoe was used to cultivate the high and low-fertility soils, and mix pasture residues through the soil with treatments of nil lime, lime, and lime plus supplementary nutrients.

She then measured soil carbon in the topsoil using standard tests before during and after two consecutive years of triticale crops to determine the total amount of organic matter present.

In six scientific papers arising from her research, Ms Coonan says the well-fertilised pasture not only supported more sheep, but was higher in carbon and plant-available nutrients. 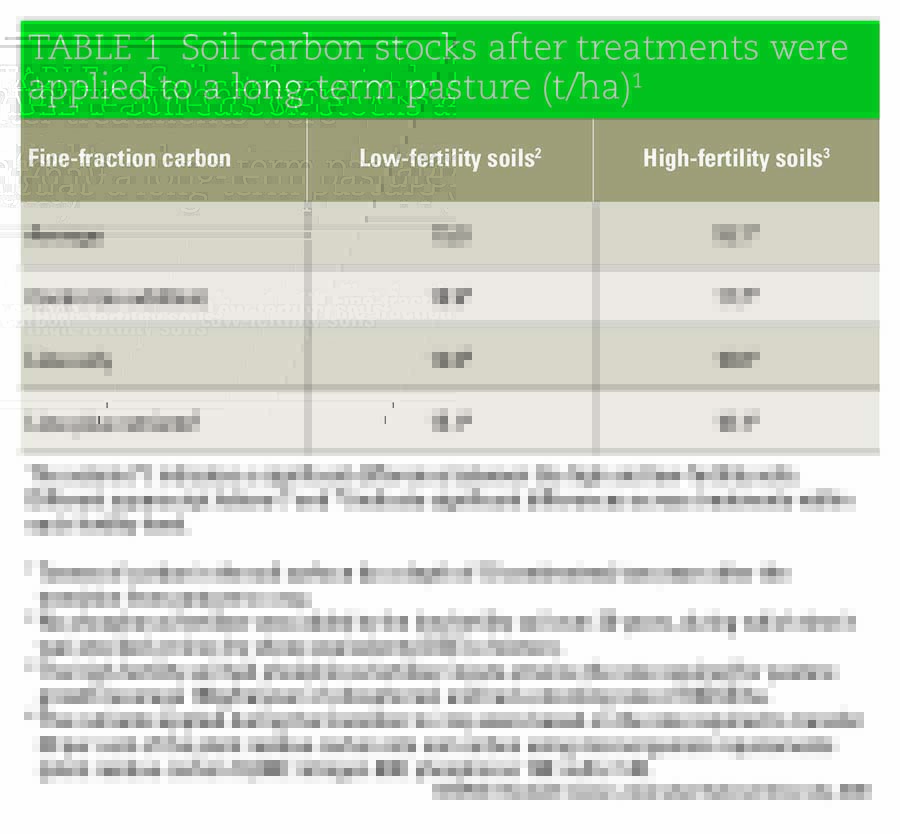 Ms Coonan says the results demonstrated a substantial loss of soil carbon over two years in all treatments (see Table 1).

"Lime application increased soil carbon loss unless the soils were highly fertile from fertiliser application to the pasture, or supplementary nutrients were added at the time of tillage," Ms Coonan says. 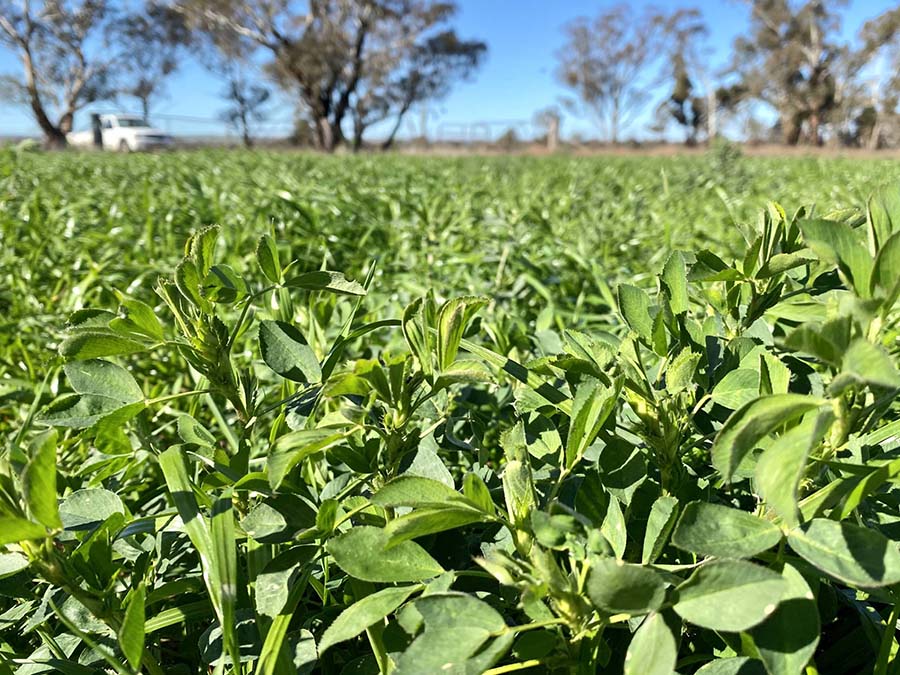 A key take-home message of Ms Coonan's research is that legume-based pastures need to be well-fertilised to build available nutrients and organic carbon levels well before paddocks are moved back into a cropping phase. This is because soil microbes, just like plants, need a balanced supply of nutrients to grow and thrive.

Over the 20 years of the long-term pasture trial on which Ms Coonan's research was based, the high-fertility treatments not only supported more sheep, they also built 12t/ha more soil carbon to a depth of 60 centimetres, compared to the low-fertility soils. "Low-fertility soils, caused by a lack of fertiliser and low pasture productivity, are at risk of losing significantly more soil carbon, about 1t/ha, if supplementary nutrients are not applied during the limed transition to cropping," she says.

"With many of the pastured soils in southern Australia likely to be in this run-down position, we suggest further research is needed to fine-tune supplementary nutrient recommendations and better understand the circumstances where carbon losses can be avoided."

Elizabeth Coonan has co-authored six scientific papers as part of her doctorate. At the time of writing her latest paper had been accepted for publishing in the international journal Nutrient Cycling in Agroecosystems.

She has also contributed to a book chapter and developed a poster about her research. Click the links below to dig deeper.