Where nitrogen fixation is working well, the rule of thumb is that pulse crops should contribute about 20 kilograms of fixed nitrogen per tonne of shoot dry matter, although this can vary from nil to 30kg N/t shoot DM.

Traditionally, a single rhizobia strain was selected and produced for each crop or pasture legume, which was broadly adapted across the country. However, current results indicate a more sophisticated approach may be needed, with elite strains identified for use in specific regions or states.

Group E/F inoculants used for field peas, faba beans, lentils and vetch were initially isolated from soils with pHCa more than 7.0. So it was not surprising they struggled to perform in soils with pHCa less than 5.5, where legumes are now being increasingly grown. Elite strains of rhizobia with better acidity tolerance were isolated from Australian soils by SARDI and from Sardinia by Murdoch University. Four elite strains have now been evaluated in field trials across SA, WA and NSW.

In 13 field trials in SA and Victoria (2016–18), where the average soil pHCa was 4.7, an acid-tolerant strain isolated in SA increased average nodulation by 57 per cent, nitrogen fixation by 24 per cent and grain yield by 14 per cent (example shown in Figure 1). In four sites and nine trials in NSW, where soil pHCa ranged from 4.5 to 5.2 across sites, an acid-tolerant strain isolated in Sardinia increased nodulation by more than 30 per cent in field peas and vetch, and doubled nodulation in lentils. 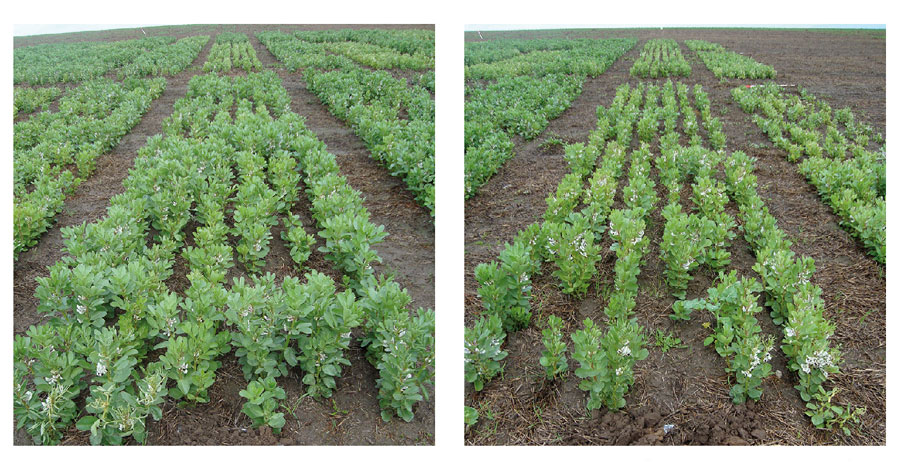 In WA, recent field trials are revealing similar increased production from the inoculation of new strains in comparison to the commercial strains in acid soils. Additionally, experiments have identified a strain with higher desiccation tolerance and outstanding survival once inoculated on seed, increasing its ability to persist in soil. This makes it a good candidate for dry sowing.

Chickpea nitrogen fixation efficiency is reported to be lower than other legumes, and nodulation measured in research trials is commonly low. This is not surprising, as the Australian inoculant strain has remained unchanged for 40 years, so there are good prospects for improvement. A cohort of promising rhizobia strains for chickpeas has recently been identified and is undergoing evaluation.

The team has identified rhizobia strains differing in tolerance to common seed dressing fungicides and subsequent field nodulation. Minimising time of rhizobia exposure to treated seed is essential to achieving effective nodulation and, where possible, separation of inoculants from seed-applied fungicides or trace elements should be considered.

Preliminary work has shown effects of both applied herbicides and herbicide residues on pulse nodulation, nitrogen fixation and yield. The team has found herbicides belonging to groups B and I have detrimental effects on legume nodulation, and decreased nodulation was also measured when applying Group C herbicides in WA. In NSW, nodulation penalties from previous-season Group B or I usage may have been more pronounced on a clay soil with pHCa 5.5 than a sandy site with pHCa 4.6.

Do I need to inoculate?

Apart from the cost, inoculation is often a messy and time-consuming practice during the busy seeding period, so growers only want to inoculate where they are confident of getting a response. DNA soil tests developed by SARDI to quantify rhizobia numbers are on-going but will soon help remove uncertainty around inoculation decisions, potentially saving significant time and money. GRDC has invested in further developing these tests as part of the southern Nitrogen Fixation Program at SARDI.

Using these DNA tests from soil samples, it will be possible to determine the likelihood of inoculation response in paddocks, allowing for the more strategic application of inoculants. The first test measures the number of rhizobia in soil that nodulate E/F legumes (field peas, faba beans, lentils and vetch) and will first be available in SA and Victoria in 2021.