Long coleoptile wheat lines are being trialled at sites across Queensland and NSW this season. This trial site at Emerald was planted earlier this month.
Photo: Supplied

The development of ‘long coleoptile’ genetics that allow wheat plants to establish on moisture deeper in the soil has attracted strong interest from grain growers looking to improve crop establishment and therefore yields in a drying climate.

The coleoptile is the protective sheath enclosing the emerging shoot and first leaves, and the longer it is, the greater the emergence potential from deeper in the soil, as discussed in a recent video with CSIRO wheat breeder Greg Rebetzke.

GRDC Grower Relations Manager – North, Richard Holzknecht said long coleoptile technology had the potential to be a game changer for Queensland and New South Wales wheat growers and could allow crops to be planted into stored soil moisture at a depth greater than 10 centimetres.

“Many growers in this region are already planting chickpeas at depth, so they have the machinery and capability to incorporate long coleoptile wheat into their farming systems,” Mr Holzknecht said. 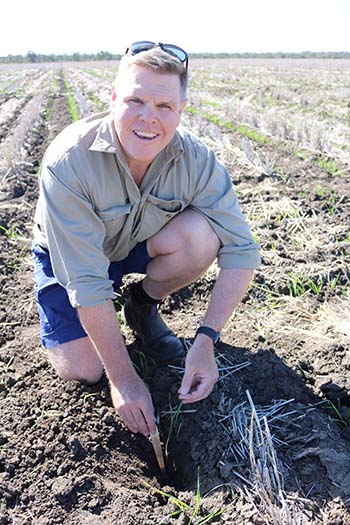 “But what they need first is an understanding of the risks and benefits of these wheat types and the implications for northern farming systems in areas such as stubble retention, agronomy and crop protection.”

Mr Holzknecht said to ensure wheat growers had this information and could take advantage of these new lines when they became commercially available, the GRDC was investing in two years of on-farm trials for long coleoptile wheat lines.

The central Queensland site at Emerald Research Facility is a multiple time of sowing trial with the first planted on April 19, the second on May 13 and the final trial planted to be planted in mid-June. These trials will have two planting depths: a traditional 3-5cm of soil over the seed and a second depth of 10-13cm of soil over the seed. A field walk at this site is planned for mid-June.

The southern Queensland sites will be at Condamine and the Lundarva/Kioma area (60km north west of Goondiwindi). These sites will be planted in mid-May with a field walk planned for interested growers and advisers in mid-to-late June.

Trial sites in NSW will be located at Breeza, Tamworth and Leeton and will include two times of sowing – mid-May and mid-June. These trial sites will include long coleoptile durum wheat lines.

“The trials will focus on understanding the relationship between the long coleoptile traits and agronomic factors including time to emergence, soil temperature and planting depth,” Mr Holzknecht said.

“This project aims to provide growers with a better understanding of the impact of the long coleoptile trait on overall crop establishment and yield in these targeted environments.”

Mr Holzknecht said the development of these technologies was being driven by increasing farm sizes, declining rainfall in the critical period leading up to planting and the need for growers to complete planting within the optimum sowing window. Planting in the optimum sowing window helps to minimise the impact of high temperatures during flowering and grain fill at the end of the growing season.

“GRDC is committed to ongoing investment in research and development that delivers tools and technologies that helps growers maximise their overall profitability,” Mr Holzknecht said.