In partnership with WANTFA, the University of Western Australia (UWA) and CSIRO, and with investment from GRDC, the trial has not only yielded a wealth of scientific understanding of crop performance, residue impacts, soil health, water use and weeds and diseases, but also leaves a legacy of contributions to scientific literature, a reference dataset and expertise for agriculture.

Associate Professor Ken Flower from UWA has been involved since the start of the long-term trial. “For over a decade, the trial has not only generated a wealth of information but also provided a focus for local, interstate and international visitors to discuss and share ideas at annual field days and crop walks,” Dr Flower says.

Although no-till crop production systems have shown benefits for growers in Australia, such as timeliness of operations, moisture harvesting, erosion control and higher yields, production in no-till systems had reached a plateau by the mid-2000s.

“There were also further questions about how much organic carbon could be stored in the soil and the optimum amount of retained residue,” Dr Flower says.

In addition, the sustainability of no-till in WA was being questioned because herbicide resistance was on the increase. This led WANTFA to commission Dr Rolf Derpsch, an international no-till consultant from Paraguay, to carry out a situation analysis of no-till in WA in 2005.

Lack of soil cover, inadequate diversity in rotations, herbicide resistance and weed control were identified by Dr Derpsh as the major challenges for the Australian system.

“Practices such as overgrazing, burning, tillage and poor crop rotation were thought to be contributing to the problems,” Dr Flower says.

WA’s grain enterprises have been dominated by cereals, particularly wheat, largely due to poor economic returns from other crops when grown under dry conditions. As a consequence, the area sown to alternative crops such as lupins and other grain legumes has declined.

Dr Derpsch recommended that no-till systems in WA should be based on full stubble retention, diverse rotations with cover crops and a more holistic approach to weed management.

This long-term project, which was designed to test and further develop these recommendations, particularly the types of rotations in light of grower experience, commenced in 2006 at the Western Australian College of Agriculture, Cunderdin, 156 kilometres east of Perth.

The trial has occupied 10 hectares on a red alkaline sandy clay loam, which is relatively heavy for the region. The average annual rainfall at the site from 2007 to 2018 was 306 millimetres, with 216mm in the growing season. Eight of the 12 years had below-average rainfall, with 2010 being a severe drought.

The treatments were based on different cropping philosophies with specific aims as described in Table 1. The treatments had three-year rotations with each phase grown every year, except for wheat monoculture and permanent pasture. The crops and cultivars were changed periodically, within the rotation, to ensure they remained relevant to growers.

Understanding and optimising a farming system

“The biggest challenge of tracking a farming system over time is capturing the correct data, right from the beginning, to gauge effects of treatments as the trial evolves,” Dr Flower says.

The profitability of the various treatments was the performance indicator of most interest to growers from the long-term trial.

Wheat monoculture was the most profitable of the rotations over the 12 years (Figure 1). This was largely because of the relatively stable wheat income, even in dry years, and the negative impact of growing cover crops in the first three years of the trial in the cereal and diverse rotations. Cover crops in the rotation had no grain income and little positive effect on subsequent crop yield. 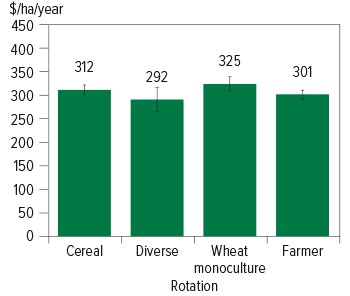 “Cover crops should not be recommended under low-rainfall conditions in these Mediterranean-type environments, unless for grazing, and we have not seen the use of these crops in these regions to any extent,” Dr Flower says.

After 2009, when no cover crops were included, the most profitable rotation was the cereal rotation (Figure 2). Again, this reflected the consistent income from wheat and barley, compared to canola in the diverse rotation. The legumes (field peas, narrow-leaved and albus lupins) also had inconsistent income in this environment. The cereal rotation maintained higher yields than the wheat monoculture, but, compared to the more-diverse grower rotation, required higher nitrogen top-dressings and had higher disease levels and weed numbers, so careful management was required.

The decreased gross margin in wheat monoculture after 2009 (Figure 2) was due to declining yields in the latter years of the trial. This was due to greater build-up of weeds, disease and declining fertility and was clearly illustrated when wheat was grown over all plots in 2019, at the end of the trial (Figure 3).

Wheat in monoculture yielded 1.4 tonnes per hectare, compared to an ‘average’ wheat yield of 1.8 to 2t/ha following most of the other rotations. Wheat after long-term pasture yielded slightly higher (2.2t/ha), whereas wheat yield after fallow was even higher at 3.4t/ha, reflecting the value of ‘saved water’. Despite this, the gross margin in the grower rotation was still relatively low due to the impact of one year of fallow in three from 2013 onwards. Nonetheless, occasional fallow can be used to introduce more diversity in the rotation by providing some ‘drought proofing’.

Figure 3: Wheat yield in 2019, when wheat was grown across all plots at the end of the trial. X-axis shows last crop grown in the different rotations (no wheat crop was grown after barley in the grower rotation). Error bars are ±Standard error (n=3).

“Indeed, growers are already using fallow as a means of improving the reliability of canola in the low-rainfall areas of Western Australia,” Dr Flower says.

Overall, results suggest a rotation based on cereals with some diversity, perhaps including occasional fallow in low-rainfall areas, may offer the highest potential profitability and be more sustainable in the long term.

The residue effect on the crops was complex. High amounts of cereal residue at seeding (exceeding 3 to 4t/ha) reduced emergence and yield in wet or frost years but had the reverse effect – a benefit – in dry years. High residue amounts also had an effect on herbicide efficacy and research showed that some herbicides were more suited to these situations than others.

On top of this, residue amounts increased following years of high rainfall and good crop growth and declined with lower rainfall.

Windrow burning before seeding also reduced residue by about 50 per cent compared to spreading the residue.

In some years, there was poor uniformity of stubble spread with greater residue accumulating directly behind the harvester – a discrepancy inherent in particular harvester makes. By the end of the trial, there were higher nutrients, soil organic carbon and total nitrogen where this residue had accumulated. The situation was exacerbated with windrow burning, where higher concentrations were found in the windrow position compared to positions off the windrow.

Dr Flower says research and engagement with machinery manufacturers to better understand and improve the uniformity of stubble spread behind harvesters is needed, especially in controlled-traffic systems and with the cutting width of harvesters increasing.

More research on the management of residue before seeding and its handling by seeders is also important.

Dr Flower says soil organic carbon concentration is a useful indicator of the sustainability of a crop rotation.

Organic carbon concentration fluctuated over the 12 years of the experiment and concentrations appeared to be affected more by rainfall and growing conditions than crop rotation.

Concentrations declined following droughts and increased after good seasons with higher biomass/yield. Concentrations also appeared to be in decline in the grower rotation after the introduction of the fallow. Within the different rotations, soil organic carbon was affected by residue distribution, with higher concentrations correlating with areas of highest residue concentration.

“It was evident the key to maintaining soil organic carbon was to minimise use of fallow and ensure uniform spread of residue.”

Overall, there was a pattern for the legumes, except narrow-leaved lupins, to use the least soil water and for wheat following the fallow to use the most soil water. However, crops grown after fallow did not dry the soil profile to the same extent as when following a crop, even though there was deeper root activity.

“This suggests there is ‘unused’ water in rotations with fallow,” Dr Flower says.

Rooting depths varied from 110 to 160 centimetres, depending on the crop. Compared to wheat, canola appeared to dry the soil less in the mid-depths (40 to about 70 to 90cm) and slightly more at greater depths.

The legumes showed a similar pattern – drying out the mid-depths less than wheat, although for most legumes, except narrow-leaved lupins, the rooting depth was shallower than wheat.

Overall, the seedbank data confirmed the effectiveness of windrow burning to reduce weed numbers across all the rotations. Another trend was for higher ryegrass numbers in wheat monoculture and with shallow tillage.

Weed dry mass was always lower with windrow burning compared to retained residue, except with canola, which had low weed dry mass and few differences. Windrow burning appeared to be particularly effective in reducing weed growth in the legume phase of the rotation.

Twelve years of research has produced a vast amount of data on soil, weeds, disease, plant counts, biomass, and yield/quality data together with the economic data – inputs and prices – used to produce the gross margins over the seasons.

The soil data has been supplied to the Soil CRC Visualising Australasia’s Soils project. This is an interactive community resource that brings together soil-related datasets and information created and managed by government agencies, organisations, community groups and individuals across Australia and New Zealand.

“The sheer amount of data makes it complex and time-consuming to digest and interpret,” Dr Flower says.

He says the number of publications so far from this long-term trial reflects the breadth of the scientific understanding of cropping systems gained from the work.

Improved understanding of microbial dynamics in no-till soils and effects of crop residue levels on herbicide efficacy, together with the economics of the crop sequences, have also been shared with the scientific community.

The long-term trial has also been a resource for training opportunities for not only agricultural high school students at the Western Australian College of Agriculture, but also for training postgraduate and undergraduate students at UWA who are contributing to both Australian and international cropping industries.