Durum wheat genotypes being screened in a rhizobox system for their response to phosphorus placement.
Photo: Frederik van der Bom

Water or food - an increasingly tough choice for a plant’s root system.

However, declining soil fertility is increasingly preventing crops from attaining their water-limited yield potential. This is particularly the case with less-mobile nutrients such as phosphorus and potassium, which are increasingly concentrated in surface soil layers due to several factors – extraction from the subsoil, shallow fertiliser applications, residue returns to the soil surface and limited tillage.

This stratification has caused nutrient and water reserves to become spatially separated. Productivity in any given set of seasonal conditions depends on how crop root systems respond to this.

Growers have responded by deep-banding fertiliser (at a depth of 15 to 25 centimetres) in layers where the soil stays moist longer. But the big question is whether deep-rooting traits may prevent roots from finding or proliferating around these bands or, conversely, the phosphorus band may limit expression of the deep-rooting phenotype.

With GRDC investment, the University of Queensland is exploring the interactions between nutrient placement, root development and water use in wheat and sorghum.

In this article, we compare the ability of durum wheat genotypes with contrasting wide or narrow root angles to utilise phosphorus placed in different parts of the soil profile in an otherwise low-phosphorus vertosol soil (Colwell P less than five milligrams phosphorus per kilogram). Fertiliser phosphorus applications (MAP) simulated (i) a subsoil band at 25cm, (ii) an enriched 10cm topsoil layer, and (iii) homogenous dispersal throughout the soil profile.

We used rhizoboxes to visualise the short-term responses to phosphorus placement after 38 days and observed clear root proliferation in zones of higher phosphorus availability (see Figure 1).

Figure 1. Roots that encounter a nutrient-rich zone or patch often respond by proliferating within it. Here, root responses of durum wheat with deep-rooting traits (narrow root angle) grown in a low-phosphorus rhizobox system (40 by 60 centimetres) with phosphorus applied in either a subsoil band (25cm) or dispersed through the top 10cm of the soil profile. The control treatment had no phosphorus applied. 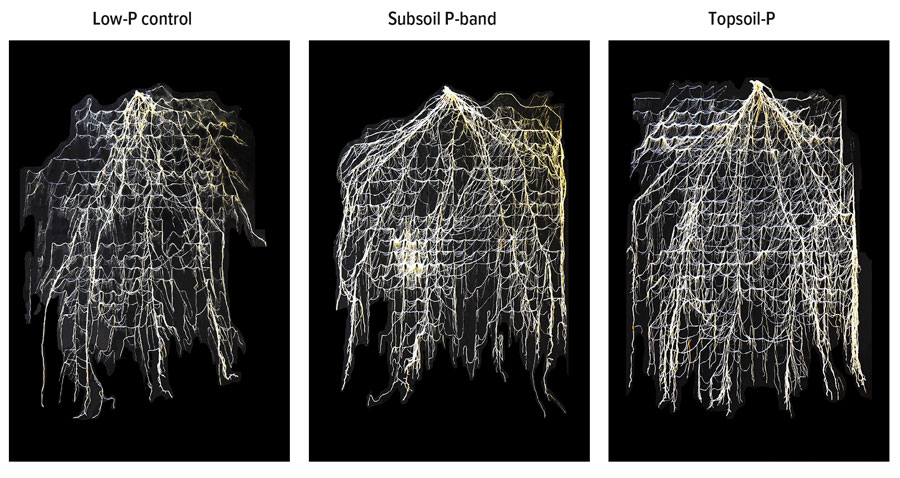 The genotype with a narrow root angle tended to show a stronger biomass response to banded phosphorus than the wide root angle. The opposite was true when phosphorus was stratified in the topsoil.

Using a lysimeter system with large 30cm-diameter cores, we studied the interaction between placement, moisture and genotype through to flowering. We compared a well-watered treatment with one in which topsoil was allowed to dry out as the season progressed – typical of field conditions.

Again, we found clear responses to phosphorus placement, with increases in shoot biomass particularly for the topsoil and dispersed treatments. There was a smaller response to banded phosphorus, which is consistent with the small volume of soil enriched in a profile that has otherwise low phosphorus availability.

Ultimately, both genotypes took up similar amounts of phosphorus and produced a similar amount of biomass when phosphorus was banded, but the wide-angled genotype showed a slower phenological development than the narrow-angled one, consistent with the observations in the rhizoboxes. This suggests the wide-angled genotype took longer to develop sufficient roots around the band and acquire phosphorus. Further work is underway to confirm these findings, and to assess the implications for grain yields.

The drying topsoil reduced biomass and phosphorus uptake compared to the well-watered treatments, with the largest reduction observed where phosphorus was confined to the topsoil layer typical of many northern region cropped fields. Under these conditions, any advantage of wide root-angle genotypes in being able to scavenge the phosphorus-rich topsoil was diminished.

Current research will explore the response to periodical rewetting events, the impact of starter phosphorus fertiliser, and compare wheat and chickpeas under field conditions on the Darling Downs.