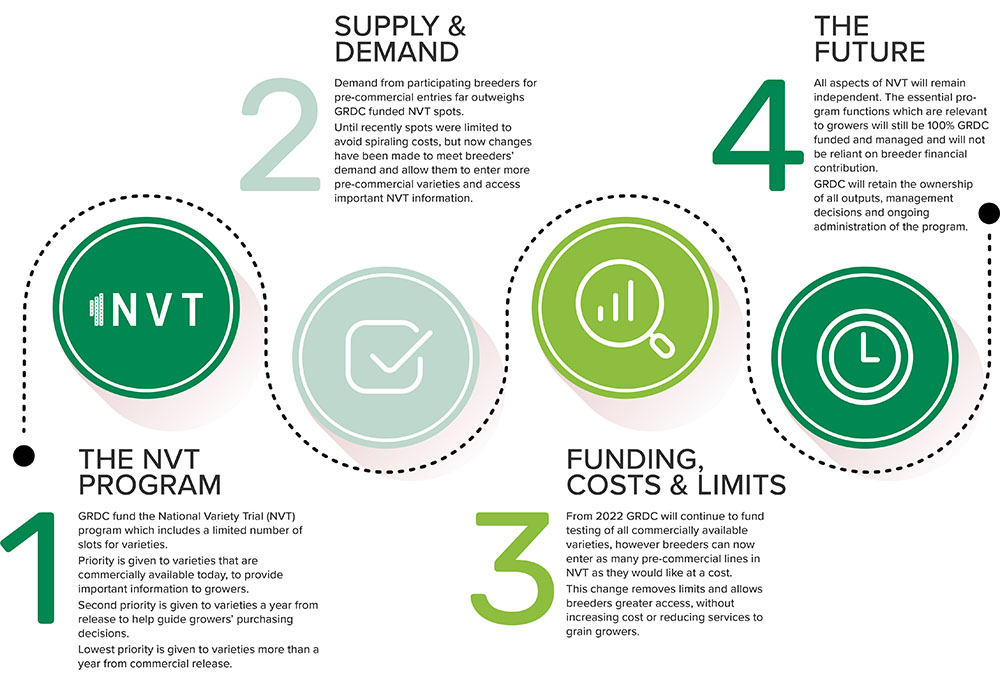 Under a new NVT Pre-commercial Entry Purchasing Model, GRDC will continue to fully fund the costs of testing newly released and commercially available varieties so we can deliver independent, reliable and trusted comparative data back to growers and advisers. However, breeding companies will pay for trials for pre-commercial varieties that are not yet available to industry. Infographic GRDC.

The well-known program, which is delivered by GRDC, is the industry’s “go to” source for locally relevant information that gives growers the confidence to adopt new and improved crop varieties.

It is the largest independent, co-ordinated trial program in the world with more than 650 trials planted annually at more than 300 locations across Australia, featuring 10 different crop species.

GRDC NVT Manager Sean Coffey says changes to the NVT program were designed to remove restrictions on the number of entries that breeding companies could have in the trials and ensure the sustainability and relevance of the program into the future.

“Until now, GRDC has fully funded the program, including the cost of breeding companies trialling pre-commercial varieties for up to two seasons ahead of their planned commercial release. GRDC paid for these trials regardless of whether the varieties were ever released to growers,” Mr Coffey says.

“Going forward GRDC will continue to fully fund the costs of trials for newly released and commercially available varieties so we can deliver independent, reliable and trusted comparative data back to growers and advisers.

“However, a user pays system will be introduced for varieties that are not yet commercialised, which will require breeding companies to cover the NVT trial costs for varieties still in development.”

Mr Coffey says GRDC had consulted with breeding companies and industry to develop an effective NVT Pre-commercial Entry Purchasing Model, with the aim of having a more efficient program that delivered a better return on investment for growers.

“Under this model GRDC would cover trial costs that have the most value to growers, while breeders would initially cover the costs of their pre-commercial lines,” he explained.

“GRDC would then provide breeding companies with a rebate for pre-commercial testing when these varieties became commercially available.” The proposed new model would also remove current limits on the number of entries breeding companies could have in NVT, as well as how long a pre-commercial variety could remain in the program.

“This is about removing constraints on the NVT, while ensuring it continues to deliver for growers and remains sustainable into the future. At the same time these changes offer increased opportunities for breeding companies,” Mr Coffey says.

“The underlying focus of these changes is the continued independence and sustainability of the NVT program as part of GRDC’s unwavering commitment to Australian grain growers,” he says.

“The majority of breeding companies we have consulted with are very supportive of these changes and we will be fine-tuning the detail in consultation with industry ahead of the coming winter crop season.”