The number of start-up businesses in the pipeline for investment by GRDC’s GrainInnovate Fund initiative has more than tripled in the past 18 months.

The fund invests in start-ups – from “seed to growth stage” – to help drive the future profitability and sustainability of Australia’s grain industry. The investee companies cover a broad range of fields including crop protection, grain analysis technology, high-tech machinery, energy and overhead management, as well as novel high-value uses of products.

Speaking at the 2021 GRDC Adelaide Update, Artesian Venture Partners director Robert Williams said the pipeline’s rapid recent growth suggested that it was healthy and well-placed to deliver returns over time. Artesian is GRDC’s equal partner in the $50 million GrainInnovate project.

Mr Williams said the COVID-19 pandemic had accelerated the adoption of agrifood technology solutions, particularly by large corporate users. “It’s also worth flagging that there is a very broad appetite for grains-related agrifood technology across global and domestic investor networks. At the Australian level, this can be seen when looking at some of the co-investors that GrainInnovate has partnered with on the portfolio of investments made to date.”

The fund has amassed a portfolio of 13 investments since its launch two years ago. It allows for diversity in terms of:

Fernando Felquer, the head of business development and commercialisation at GRDC, said GrainInnovate was a venture capital fund established to identify and engage with emerging agtech  start-up firms – both within Australia and globally – to support their growth and thereby bolster the entire agtech “ecosystem”.

“GrainInnovate allows us to access these non-traditional partners as well as non-traditional co-investors. These investments complement the output from the other main investments in GRDC’s R&D portfolio. The ultimate goal, of course, is to have better products and services in the hands of Australian grain growers,” Dr Felquer said.

Marcus Kennedy, the executive chairman of investee firm TeleSense, told the Update that GrainInnovate had provided support, expertise and industry referrals to his California-based company, as well as financial backing. TeleSense, which provides internet of things (IoT) monitoring technology and equipment for stored grain, focuses on optimising the post-harvest value of Australian grains, Mr Kennedy said.

The firm aims to predict the quality of stored grain by detecting hotspots, moisture build-up, mould and pest infestations. “Grain starts deteriorating as soon as it goes into storage. Our task is to manage that in a much more predictive and better way to get better outcomes,” Mr Kennedy said.

“Our dream in the future is to use artificial intelligence, machine learning algorithms and software to predict deterioration patterns of stored grain and to prescribe and provide actions to growers … so they can make 95 or 100 per cent accurate decisions about storage and marketing.” 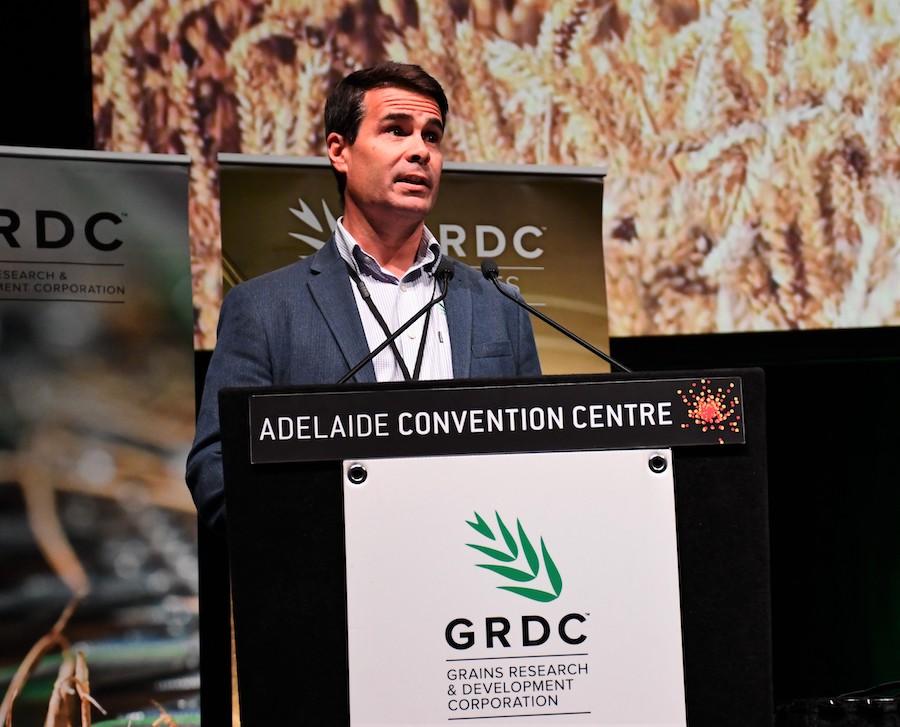 Another GrainInnovate investee, FluroSat, was established in Australia four years ago to provide agronomic decision support tools, particularly in the field of precision agriculture to the grains industry. It has since expanded to become a worldwide operation.

Marie Marion, an agronomist with FluroSat, said the company had built a computing engine – FluroSense – to convert raw agricultural data into agronomic insights. “This allows growers and agronomists to leverage big data that is already available to make it actually useful and usable in the field,” Ms Marion said.

“The main challenge today in precision agriculture is that we have a lot of data … but the human brain is not a machine that can access the data and understand what it means for your operations. So the goal for us is to automatically collect this data, analyse it in an engine, and provide it in a user-friendly tool that is easy to access.

This can allow growers to use data such as satellite information and NDVI (normalised difference vegetation index) to answer questions such as how their paddocks compare to each other as well as to other properties in their region.

“At the scale of the individual paddock, our algorithm can use satellite imagery to automatically detect stress areas in the field and alert the user to the evolution of a specific stress over time and help them identify the zones to scout.”

The tools could also provide timely fertiliser rate recommendations based on surface organic matter and yield potential, she said.

Queensland firm SwarmFarm Robotics has pioneered the use of robotics in the Australian grains industry. Its founder and chief executive, Andrew Bate – who is also a successful grain grower – told the Update that he had long been interested in farming systems before starting his autonomous robotics company.

About a decade ago, Andrew formed partnerships with universities in Sydney and Brisbane to start developing autonomous robots for agriculture. “We employed our first engineer in 2015 and we have grown to a team of 16 people. We are one of the first companies worldwide to deliver successful, autonomous robots to farmer customers, with 14 different robots.”

“Autonomous agriculture is building a different future. Our robots are lightweight, so they do less damage to the soil. We run on controlled traffic, but with one-tenth of the weight (of traditional systems) we deliver less compaction on either side of the tram tracks. Our robots are changing the agronomy of how we grow crops.”

SwarmFarm attracted support from the GrainInnovate fund in 2020. Andrew said that he saw a great deal of good research that was never developed or commercialised, and the fund was a positive step towards bridging that gap.

Artesian director Mr Williams said GrainInnovate’s investment strategy had been designed to deliver multiple sources of return to the industry over time. “In order to have a globally competitive agrifood industry, it will be necessary for Australia to have a healthy agritech ecosystem, supported by a broad range of participants including government, farmers, industry groups, universities and research institutes, investors, accelerators and start-ups,” he said.

“In managing the fund, we utilise a unique approach which focuses on building a broad, diversified portfolio of early stage start-up opportunities that will then provide a pipeline of pre-screened and de-risked start-ups, where we will aim to concentrate the funds via later-stage investments. These later-stage investments can occur once the technology and scalability has been proven over time.”