Heading in the right direction

Heading in the right direction

Grower Andrew Russell with his daughter Pippa, who has been studying her university degree remotely this year because of COVID-19 restrictions in Melbourne.
Photo: Russell family

Derek and Rhonda Young and two of their three children, Mikayla and Braden, farm at Kulin, in the state’s central wheatbelt. They grow equal amounts of wheat, canola, barley and lupins in rotation and run 200 Dorper sheep for meat production.

The crops have hung on and stayed reasonably green despite the lack of rain. We got 15 millimetres in early September, which was our first double-digit rainfall since June. Sometimes it’s amazing what you can grow on a below-average rainfall, but it’s still a big challenge.

Without any waterlogging, root systems fully developed chased moisture and efficiently used any rainfall we got. Wheat has struggled a bit but canola is the big success story. It’s got big fat pods and managed through without a frost, which is one of its biggest limiting factors. It’s high value and prices are excellent. All crops podded up quite well without heat during their flowering windows.

Harvest will be underway in November, starting with canola to avoid shedding grain in hot winds. I’ll have sold about 70 per cent of the grain by then and planning rotations for next year. Fertiliser orders are critical at this stage because of pricing.

Off-farm we’ve been busy. I’m involved in a few community groups including the Cultivating Kulin Committee supporting infrastructure projects and also a community co-op involved in bringing businesses to town. Earlier this year a group of us bought the licence for the local hotel to save it and it’s travelling really well – probably better than ever. It’s amazing. During (COVID-19) lockdown it would sell out of takeaway and now they’re serving 50 meals a night. We’ve got a very special community here. It’s marvellous to be involved in things like that because it’s very uplifting, it’s important to everybody’s welfare and you’re building a community for the next generation.

The season is on track to be as good as we’ve seen. We’ve had above-average rainfall, which made things wet but dried out a bit in spring, which was a good thing.

Expenses have been high but it should come back because the potential is enormous. We’ve spent a lot more money on urea to match the season and generally the crops are looking fantastic. We had to use a helicopter to spray canola to protect it against Sclerotinia. We usually use a plane, which is cheaper, but it couldn’t land anywhere. It was just too wet.

It’s a perfect environment for disease, from Yellow leaf spot to Leaf rust and Septoria. All cereals were sprayed for the first time in a few years. In mid-October I had to apply a second fungicide at full head emergence on DS Bennett and LRPB Trojan wheats. Naparoo stood up quite well as did new lines RockStar, Catapult and LRPB Hellfire.

Stripe rust was less prevalent in most grazed crops, but we still had to treat it. We had spring lambs everywhere in September and, with pasture as good as I’ve seen in 25 years, we left them on the ewes longer, which made life easier. We got marking and shearing out of the way before harvest and cut hay, so we’ve had plenty on the go.

This year has really shown how much we need people. With COVID-19 restrictions I’ve really missed interacting with growers at field days and seminars and that peer-to-peer learning. I’m really aware of everyone’s mental health. We haven’t been able to go away on holiday all year, so as restrictions eased I made sure people took a break from the farm – even just camping for a long weekend – before harvest. 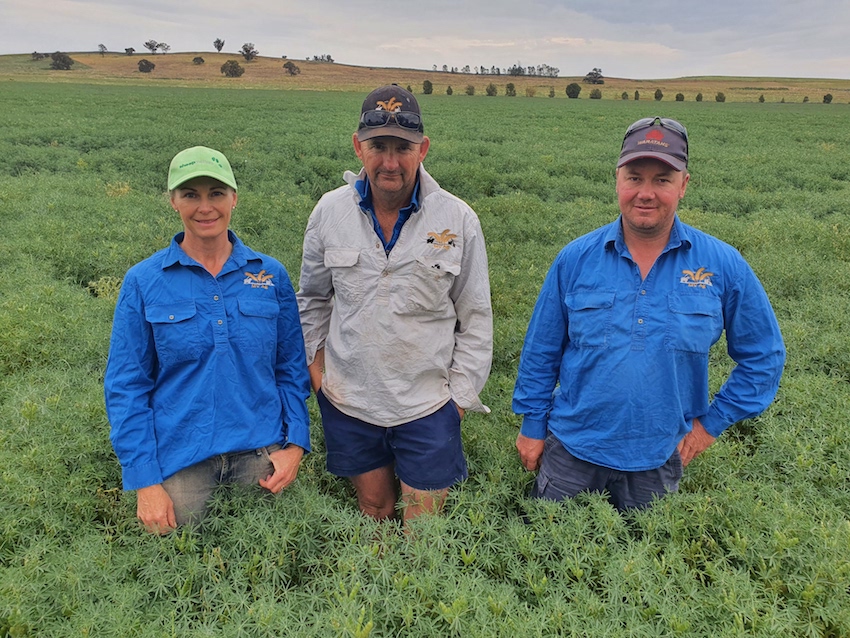 (L-R) Toni and Peter Unger with employee Eric Milne in their promising crop of lupins.

Peter and Toni Unger farm north of Parkes, in central-western NSW, helped by their four sons when they are not at school. They grow wheat, barley, canola, lupins and some oats, and have 1600 self-replacing Merino ewes, about 30 per cent of the enterprise.

The difference between this time last year and this year – you just couldn’t write it any better. We got between 25 and 30mm of rain in mid-September that set us up pretty well. Without significant rain for a month, that’s when we would have switched on the tap.

We put out a fair bit of fungicide on canola, barley and wheat and sprayed canola to control heliothis and aphids. We will deal with resistant ryegrass in the barley crop by windrow burning.

Every day closer to the header lessens the risks. We windrowed canola, spraying as we went, and that will be the first crop we harvest, in early November. It will probably be our most valuable crop. The header is the lie detector, when we will know how we’ve managed our nitrogen. In some paddocks we’ve done quite well and in others we may not have had quite enough for a season like this.

We bought extra rams in September with the plan to continue joining 12-month-old ewe lambs to help boost livestock numbers. That side of the business has been fantastic too. I’ve got more feed than I know what to do with, but it’s a good problem to have.

We stayed pretty dry and are probably just looking at average yields from dryland crops, but I’m pleasantly surprised how well they grew on subsoil moisture. It was a mild tail end of the season and we snuck through without a bad frost, so that helped the crops finish as well as they could with the lack of moisture.

Harvest started with dryland wheat in early October – about a week earlier than ‘normal’. With good water storages, we did a final irrigation of faba beans in late September and harvested them after the dryland wheat, in late October. Then it will be the irrigated crops, which are even and solid.

Harvest will continue until mid-November and we’ll follow the headers pretty quickly with a residual herbicide to get on top of feathertop Rhodes grass. Because we have summer-dominant rain, a priority is to get residual herbicide down so we’re storing moisture straight away for next year.

Sorghum went in late August and we’re happy with establishment. I snuck in an application of urea just before harvest that we watered-in with the pivots and its ticking along fine. We plan to ratoon in January if we’ve got enough water.

This year is probably the best I’ve seen. We have a full irrigation allocation, but we won’t need it all if it keeps raining the way it has. The dryland wheat, barley and peas have good yield potential. They got a bit waterlogged in August with snow and 60mm of rain, but it actually did the world of good. All the pastures got away and we threw urea on the cereals and they bounced back really well. I only had to re-sow some patches of peas that got too wet. We had a lot of wind in September, which dried things out on top so we irrigated the poppies so they would germinate.

One paddock of barley stubbles was too wet to get on to, but I’ll sow that with hemp in November so that worked out all right. I’ve never grown hemp, but there’s a fair bit down here. I’m not growing spring wheat as the markets aren’t great.

We had some Septoria damage in wheat but applied fungicide and it wasn’t too bad. We put herbicide and fungicide on the spring crops in October and I treated some patches of corbie grub. And we’ve been lamb marking. It’s a pretty full-on time of year. I’ve probably got too much going on but it keeps it interesting.

In November we’ll be irrigating poppies, peas, hemp, chicory, wheat and barley. We’re on track to start harvest with the dryland barley a week after Christmas. Then it’s full swing in January and February harvesting winter and spring crops. It all comes together in the end.

Brothers Kevin and Geoff Bond farm at Mannum in the Murray Mallee region. This year they are growing wheat, barley, oats, canola, lentils, vetch and triticale.

In late September we decided not to cut our oats for hay. Without much August rain it dried off quickly – before the three-week withholding period after fungicide application – and wasn’t going to make premium export grade. Domestic hay prices aren’t good so we’ll harvest it for grain. There’s not a huge market for oats in a high-yielding year but we’ll store it and if it’s a dry summer it will be worthwhile.

Leaving the oats freed us up for contracting work. In October we also sprayed out our vetch. We want to use it as a brown manure, to boost organic matter and next year’s moisture profile. It will reduce summer evaporation, weed growth and soil surface temperature, promoting more microbial activity.

We finished our late fungicide in September and then sprayed the canola for diamondback moth. We’re very happy with canola, with pod-filling rain coming at a good time after flowering. The barley is looking good, the wheat is promising and the lentils have bulked up. We’ll start harvest in early November with oats.

We’re also trialling some summer crops on the seeps using a high-workrate  plough with discs double the normal diameter. We saw it on a Mallee Sustainable Farming crop walk, digging deep to invert non-wetting topsoil. It might work for our seeps, bringing up wet soil from the bottom to establish millet and sorghum.