"Kenton started his career at SARDI in 2010 as a durum and barley agronomist before returning to the University of Adelaide to embark on a PhD with GRDC investment in 2014."

Dr Porker returned to SARDI in 2017 to lead the Waite cereal agronomy group.

Dr McCormick said he has a strong reputation in the grains industry and is currently a lead scientist and collaborator on a number of important national agronomy initiatives across southern Australia through his proactive work with colleagues at CSIRO, NSW Department of Primary Industries, La Trobe University and the University of Adelaide.

"Senior researchers in these institutions have noticed that SARDI's cereal agronomy group has been taken to a new level in its physiology expertise and novel agronomic research focus with Kenton's appointment. Under his leadership SARDI is well-positioned to deliver applied science outcomes to benefit grain growers and he is a worthy recipient of this award." "Dr John Angus was an undergraduate and postgraduate student in agriculture at the University of Melbourne and earned a PhD on foliage structure, light utilisation and crop growth in cereals," he said.

"He worked for CSIRO for 37 years and has held an adjunct professor position at CSU since 2002.

"John's research career focused on crop physiology and nitrogen use, and involved simulation and agronomic studies on crop phasic development, water and nitrogen management in dryland cropping systems, the effect of the crop and pasture sequences on cereal yield and profitability.

"A key feature of his approach to research has been close collaborative partnerships with growers and a commitment to the communication of the outcomes of his work to growers and research peers."

In his Donald Oration at the dinner, Dr Angus spoke about his career, which spanned almost 50 years, and highlighted his work at CSIRO including early research in collaboration with researchers at the Rutherglen Research Institute and a later nitrogen project that involved 80 experiments on farms over a four-million-hectare region centred on Temora.

He said it was the first time researchers had shown that profit could be increased by applying nitrogen to crops in south-eastern Australia.

"If there hasn't been adoption, the reason may not be the growers' fault - it may be that the agronomy has been deficient," he said.

Going forward, Dr Angus pointed to three areas of research he would work on if he had the opportunity:

During the evening, Dr McCormick named La Trobe University Associate Professor Peter Sale as a fellow of the Australian Society of Agronomy for his outstanding contribution to agronomy through teaching, research and involvement with producers in the grains and livestock industries.

"His research interests focused on soil fertility, the evaluation of reactive rock phosphate fertilisers, the role of phosphorus on the productivity of grazed legumes, extension activity to underpin the adoption of productive pasture technology in Victoria, and managing subsoil constraints in cropping systems." 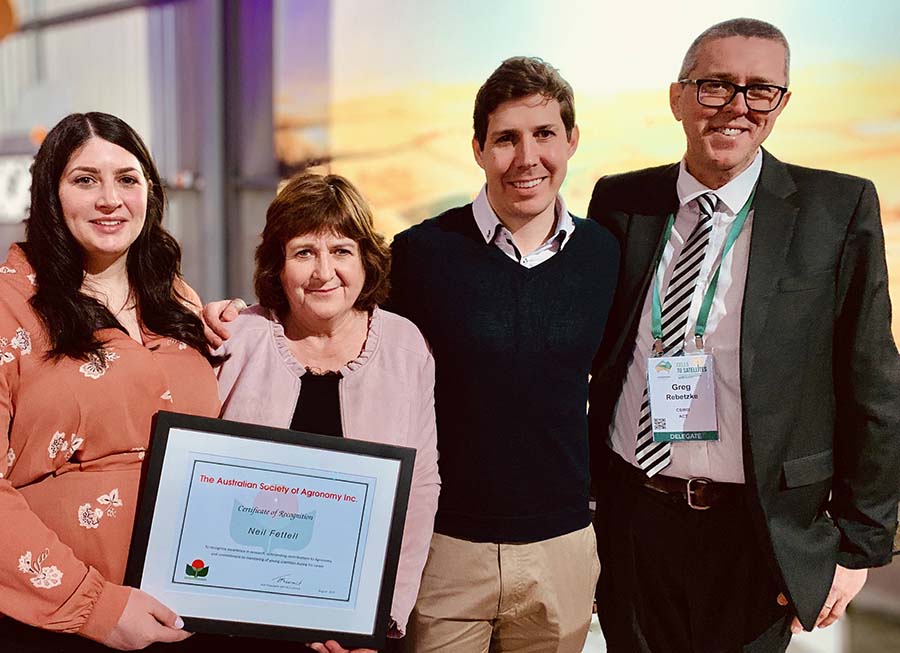 CSIRO's Dr Greg Rebetzke also presented a certificate to Mrs Shirley Fettell to recognise the 40-year contribution her husband Dr Neil Fettell made to the Australian Society of Agronomy.

He was recognised by colleagues as a strong advocate for agricultural research in central NSW, as well as a leader, expert, mentor and counsellor.