Derek Young farms at Kulin, in Western Australia's central wheatbelt. He is one of our 2020 featured growers and says this season is - so far - shaping-up as a typical year, after an exceptionally dry start to 2019 with no subsoil moisture.
Photo: Evan Collis

Each year, GroundCover™ follows a group of growers from across Australia as they manage the cropping season. In this second instalment, we check-in with growers as they prepare to sow the winter crop. 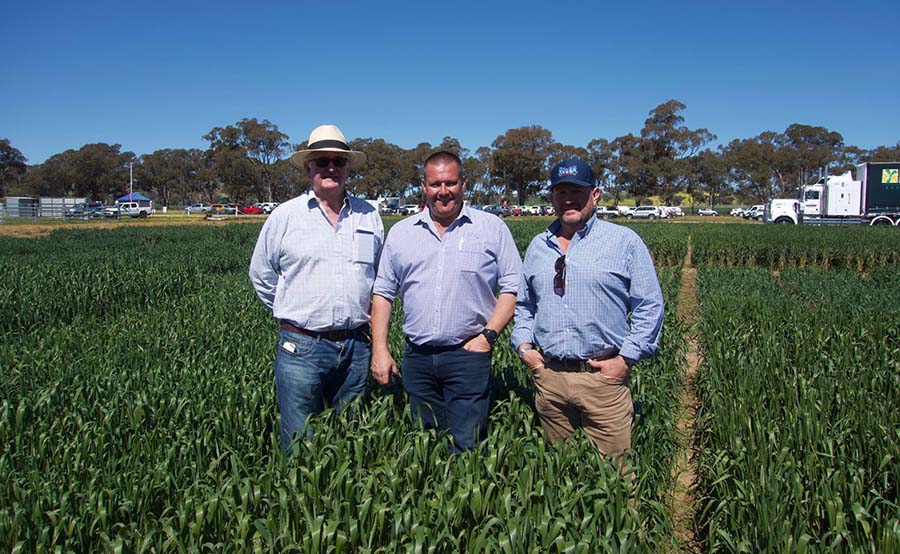 The weather has been fantastic, with 90 millimetres of rain over a few days in early March then smaller follow-ups like the old days. It was good for the soul, good for morale and just lovely for the country. Our legume pastures shot up - looking magnificent - and we got some early ryegrass and barley grass control.

We have not seen an early break like that for 10 years. It was the first year we have sown into moisture since 2016.

We started the program with dual-purpose triticale and wheat in early April, making up 40 per cent of our cereals. We also had a second, smaller disc rig bulking up pasture with arrowleaf and subclover on existing pasture paddocks, plus sowing new paddocks in the rotation.

Then it was canola. We are growing 100 per cent hybrid for the first time. With early vigour, weed control and good coping mechanisms in tougher periods, I am convinced we are getting value - even though seed cost is higher.

Broadleaf lupins and safflower followed and in May we will have our ears flicked back sowing spring wheats. We do not want to go to early with them, as we can get knocked around with frost in spring. That said, 14 May is a focus for us to have everything in the ground.

We have been soil testing for pH for more than 30 years. In latter years, more zonal testing has occurred for different soil types. We are using lime to deal with acidity at depth, with heavy rates of up to four tonnes/ha cultivated with big discs. It is a big investment but we have been able to raise PH levels in the acidic layers at 10 to 20 centimetres inside a couple of years. We are very happy with the early results of this strategy. Derek and Rhonda Young and two of their three children, Mikayla and Clinton, farm at Kulin, in the state's central wheatbelt. They grow equal amounts of wheat, canola, barley and lupins in rotation and run 200 Dorper sheep for meat production.

We started seeding on 15 April with canola, then lupins, barley and wheat. We can get a lot done in a very short space of time, but we like to spread the risk out a little bit.

We had a bit of moisture in summer and sprayed with the WEED-IT boom. Pre-emergents with a knockdown were applied at seeding. We deployed a self-propelled boom spray I built many years ago to use on barley with the knockdown Paraquat and trifluralin. It needs to be incorporated within an hour, so we sprayed in front of the (K-Line) SpeedTiller® for the best result.

We have introduced 'speed tilling' as part of the rotation one day before seeding barley. Being on a four-quarter rotation, a quarter of the farm gets done every year. It provides a massive improvement in weed control, plus there is a microbial and nutrient response that we do not fully understand yet. We have been zero-till for so long, so we suspect the incorporation of lime and other products spread on top could also be a factor.

Agronomically, we are definitely in better shape this year because we have had moisture early. It is coming back to more of a typical year - whereas last year was an exceptionally dry start with no subsoil moisture. This is just that much better that we are very confident.

On-farm it has been all about paddock preparation, using a Reefinator and paddock roller to smooth-off hills and shift rock heaps. A lot of diesel is burnt, but it is worth it. We have also spread a quarter of the farm to lime and the paddocks are coming up really nicely. 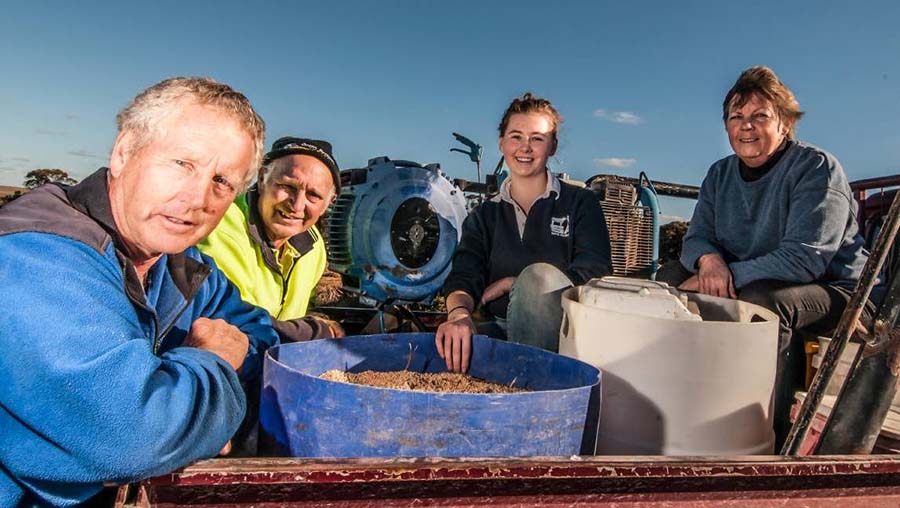 It is all ready to go. There is moisture out there and last year's legumes have set up the soil. We did three times as much hay as normal, so have reduced stubble loads, and summer weed control has been 'happy' - other than a few caltrop escapees.

We have been selling hay and grain. We kept nearly all our grain harvest from 2019 on-farm in 200-tonne grain bags that allow us to sell when the markets are right. Canola prices were very good and there were good markets locally for wheat and barley.

We do not intend to dry-sow, but we will expect to start by late April or early May, starting with canola and an early paddock of barley to spread harvest. Then it is vetch, oats for hay, wheat and barley. Oats for hay are intended for export and vetch for local hay.

We have replaced pulses with vetch because we have ourselves set up for hay with storage and good equipment. And there is profit in hay, whereas others are higher-risk. We are also finding it is the better option for cleaning-up paddocks for grass control.

We spread fertiliser - phosphorus and sulphur - before sowing, finishing in March. Then all crops go in with trace elements down the tube with liquid injection and some phosphorus and nitrogen near the seed.

We harvested volunteer sorghum and millet in April that grew in our seeps (areas with a high-perched water table). We are only talking hundreds of kilograms but it was very rewarding to harvest a summer crop in the Mallee. Peter and Toni Unger farm north of Parkes, in central-western NSW, helped by their four sons when not at school. They grow wheat, barley, canola, lupins, some oats and have 1600 self-replacing Merino ewes - about 30 per cent of the enterprise.

Crop plans have changed a little now we are building subsoil moisture. Some paddocks that were in rotation for a break crop will be sown to canola instead of a high-density legume (HDL). Some HDL will be sown into lower-performing pasture paddocks, building nitrogen and weed control ready for the cropping phase. Wheat and barley will be much the same as planned and it will be nice to plant them into good moisture this year.

Seeding was due to start around 20 April. We will plant one-third to wheat, one-third to barley and one-third to TT canola, lupins and HDL. Canola will get sulfate of ammonia in front of planting. Our starter fertiliser inputs will be cut back due to building phosphorus levels over the past couple of poor seasons.

We have been controlling summer weeds and spreading lime to a prescription map when winds allow. Also, doing repairs and maintenance to sowing equipment, grading seed and getting cropping supplies, most of which we have on-farm now.

We scanned ewes in late March - twins 63 per cent, singles 28 per cent and dry nine per cent - a pleasing result for first time joining in confinement. The sheep have been out of confinement since mid-March, enjoying the freedom and eating green stuff. 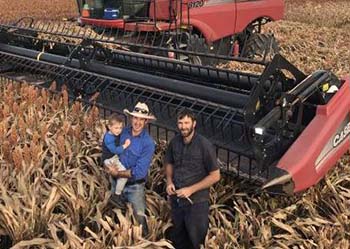 Andrew Milla, holding his son Cooper, with contract harvester Joel Rauchle says he has had a good start this year after a poor season in 2019. Photo: Margie Milla

In February we were completely out of water, looking at using our irrigated country for dryland, but it is unbelievable how quickly things can turn around. We then got 240mm of rain - more than half the yearly average - in a couple of months, so we have had fantastic start.

We got a really good run in the river so we have been busy pumping water into our storages. It has set us up pretty nicely for the next 12 months, for the winter rotation and a good percentage of our irrigated summer program as well.

We have been fallow spraying - keeping on top of our weeds across the farm and I have done some contract oat planting. We started sowing with a pivot of faba beans in the last week of April. We plan to put our dryland wheat in the first couple of weeks of May. Then we roll on to irrigated wheat, into early June.

There is about 1000ha of dryland and 260ha of irrigated winter crop. We are saving two pivots for early summer crops as well - probably early sorghum in August that we will aim to ratoon.

We have also been trucking grain, fulfilling contracts into feedlots from last winter's harvest. But predominantly we have been keeping on top of the fallows, pumping water and getting ready for the winter plant. We seem to have been flat-out really. It is fantastic. Field peas are in the rotation mix for these Tasmanian growers. Photo: GRDC

Our spring crop harvest dragged on a bit. Humidity was up, so getting moisture content down enough in the grain to harvest it was difficult. We did oats, dryland peas, barley, ryegrass and clover seed, wheat and finished with chicory in mid-March 2020. It was a pretty tough year with not much spring rain, but Planet (PBR) barley was the shining light.

We put in tillage radish, rape and oats in mid-February for winter feed. We sowed dual-purpose wheat in early March. The barley will go in by the first week of May.

We were a bit later getting in winter crops this year, waiting for rain. We did not have a lot of irrigation water to splash around so we took it as it came. You get more value, more feed out of it the earlier you go but it looks really good now.

We will graze the rape and then plant spring barley - depending on price. Rape has a good taproot, which breaks up the soil a fair bit.

We have had a fair bit of rain since the end of February this year, so we have gone from one extreme to another - from having no feed to having so much - and not enough sheep.

It was soaking rain, so hopefully we get a wet winter and fill some dams for spring crops. The storage dams are zero, so without good winter rains it could just be dryland - which means no hemp and poppies and other irrigated spring crops. The dryland crops, though, have had a really good start. There has been really good germination.