Mannum, South Australia, grower Kevin Bond - who is contributing to our GroundCover grower series - sowed for six weeks until the end of May, including some all-night sessions.
Photo: Supplied

Each year, GroundCover™ follows a group of growers from around Australia as they manage the cropping season.

In this third instalment for 2020, most are reporting ideal early conditions in much of the country. But some areas have had a less than perfect start. 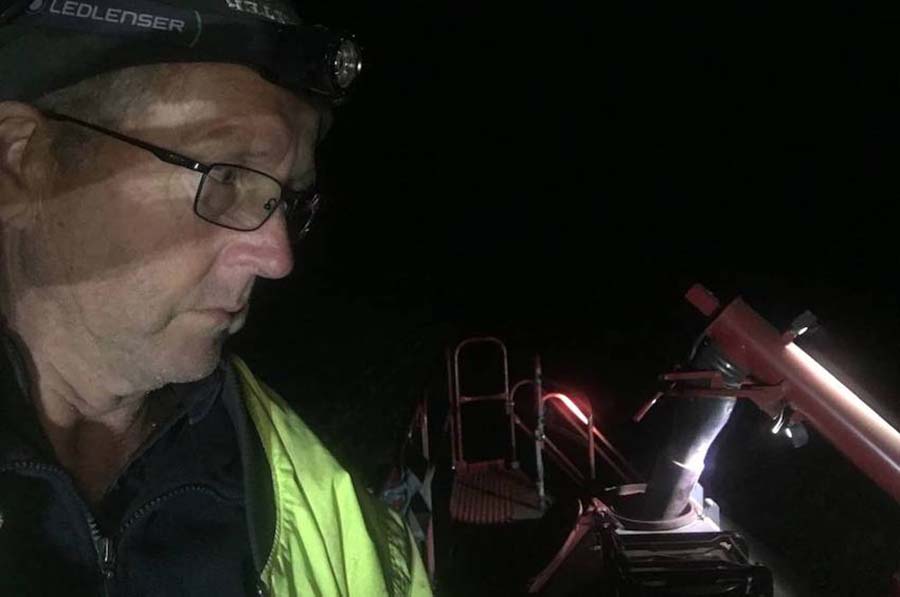 Brothers Kevin and Geoff Bond farm at Mannum, in the Murray Mallee region. This year they are growing wheat, barley, oats, canola, lentils, vetch and triticale.

We were full-on sowing for six weeks until the end of May, including a couple of all-nighters. The biggest thing we can do for crop yield is to get it in on time.

It was satisfying to see the crop nicely germinating against dark soil that is not dry and dusty and windswept - it is pretty rewarding.

Seeding conditions were perfect. We spread single superphosphate in March and sulfate of ammonia just before the seeder, trying to reduce workload afterwards. Sulfate of ammonia is not as volatile as urea - you don't lose as much in the atmosphere. It will carry us through to mid-winter, when we will assess nitrogen levels.

Continuous cropping allows the safe use of a flat roller. We rolled all the hay, lentils and vetch - and just the rocks in other crops that the tynes brought up. Otherwise, harvest is really difficult and you certainly can't cut hay. Mandalotus weevil, which attacks canola, was around.

We used Cosmos® on our seed, then came back with a treatment and will monitor it. Herbicide and fungicide spraying will continue until September.

There was a lot of cleaning and servicing to be done. The wheels nearly literally fell off the air seeder - the pivot on the bin axle started cracking - so we have fixed that up. We are also grading tracks.The past two years have been very dry, but we have had good yields - so we are looking forward to seeing what we can do this year. Derek and Rhonda Young and two of their three children - Mikayla and Braden - farm at Kulin, in the state's central wheatbelt. They grow equal amounts of wheat, canola, barley and lupins in rotation and run 200 Dorper sheep for meat production.

It has been challenging, with below-average growing-season rainfall. But we were very fortunate to have 55 millimetres in February.

We have been living off that stored moisture and it is working out rather well. We had just enough moisture to get all our crops germinated. It is surprising how much they have grown given the rainfall we have had.

Seeding finished quicker than expected - in mid-May - and we were trying to take it slow. It went in really well, despite the dry.

Now there is a focus on post-emergent weed control. It has been quite easy because we have had a lot of time for management.

Seed we provided to the Australian Herbicide Resistance Initiative for work on ryegrass resistance has contributed to findings that particular chemicals work well together to achieve 99 per cent control in lupins.

It will cost a little bit more than our regular spray program, but the extra kill is so rewarding.

We got some early germinating weeds, but not a full flush. So, we have staggered the spray program to suit and the wheat and barley crops are quite clean.

After seeding, we got straight into building a shed. There was a threat of cyclone so we did not even wash the seeder down. We got to lock-up just as the winds hit and it stood up very nicely.

So many field days and events have been cancelled because of COVID-19, so to keep up to date you have to look at what is online. But it is really business as usual. The off-farm stuff has affected us the most - not visiting family and friends that we would like to. 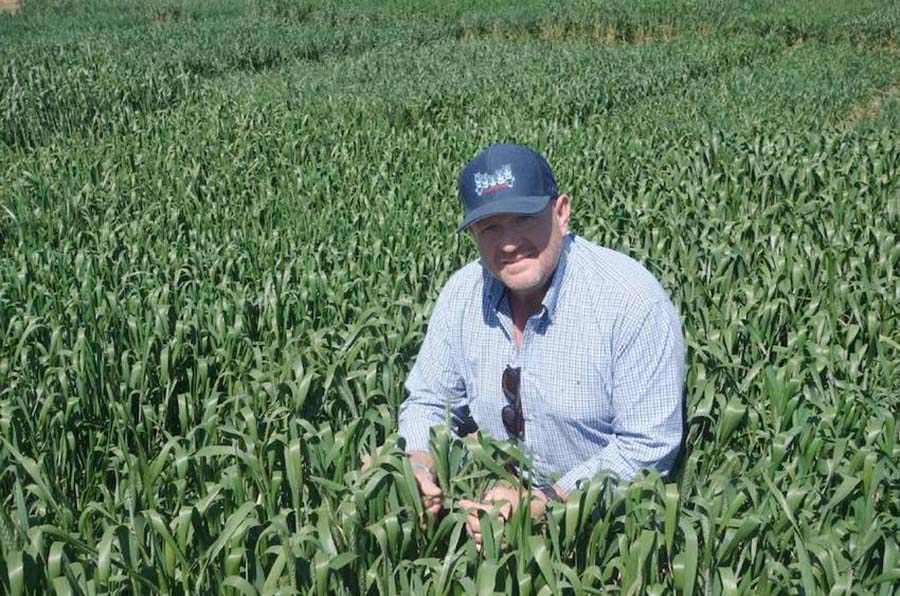 Everything is coming along really well and going gangbusters. We had quite a bit of rain in late April - 90mm in a week - on top of pretty much a full profile. We still had about 40 per cent of our program to complete, so I was a bit anxious about getting back on the paddocks.

It took more than 10 days to get back into sowing after getting bogged a few times. We just turned our sowing program around a bit and things worked out fine.

Sowing finished in late May and we have had good weather since - just a few showers here and there, which kept moisture at a really good level. Things really are nothing short of ideal at the moment.

The early break gave us a wonderful opportunity for a double-knock across the farm and that is enormous. Staying on top of ryegrass is paramount, so that when we have a chance like this it is not wasted.

We put nitrogen under all the cereals and brassicas at sowing. We have quite a big deep-nitrogen soil testing regime underway. When results come back, it is about planning for the nitrogen requirements needed to reach full potential.

Now the crop is in, we are still busy - repairing and servicing machinery, spraying, delivering grain and stock work. We jumped straight off the tractors one day, and were marking lambs the next.

Legume-based pasture (sub and arrowleaf clover) is looking the best I have seen for 10 years at this time - just absolutely enormous.

The early break created a huge amount of feed, so I am really happy we decided to bring legume-based pastures into our rotation. They are an integral part of our system to control weeds, and give us diversity with livestock. The ewes and lambs are loving it. The pasture is up to their bellies.

Peter and Toni Unger farm north of Parkes, in central-western NSW, helped by their four sons when not at school. They grow wheat, barley, canola, lupins, some oats and have 1600 self-replacing Merino ewes - about 30 per cent of the enterprise.

It was an ideal start. Seeding finished at the end of May and rainfall up to that point (about 250mm) was about average. Conditions were very mild. Some people were saying we needed a frost or two or slow things up, but not us.

Everything went in on time and we only had one issue - re-sowing a bit of canola that got too much rain. It washed the trench in and buried it a bit too deep. We replaced HDLs with canola because these would provide a better return with the good early break.

Crop germination was not super-fast - still taking a good seven to 10 days, which was normal enough. But once it was up and going, any of the early grazing crops - in particular - took off. Others were having problems with it coming out in head and wanting to set seed.

We were in-crop spraying and monitoring weeds during June. Nitrogen is monitored with normalised difference vegetation index (NDVI) satellite imagery and soil testing, and we will top up in early July if needed.

We planted crops with nitrogen and suspect we will have good levels because of mineralisation due to the warmer weather and non-crop events over the drought years. But we know what is needed to get five tonnes per hectare, so we might just have to make-up the balance.

Ninety-five per cent of our dams are full and we are not feeding any livestock. The younger sheep are on grazing oats and ewes are on grass paddocks. They lambed through June and we will mark in July.

We have four teenage boys and I have told them to take note of this season, because it might be a little while before we see another one as good. You probably could not have ordered a better start.

We deep-planted about half our dryland crop - Lancer wheat - to about 120mm, moisture-seeking in early May until the moisture got too far down.

We planted the rest shallow on the strength of forecast rain and thankfully pulled it off. We got 15mm as we finished and had reasonable establishment, although patchy in places.

Up north, nearly every year we deep-plant a percentage of our crop. We usually get most of our rain in summer before a big dry spell, which makes planting challenging, having to go deep to find moisture. It is hard on machinery but you just poke along steadily.

Faba beans went in under irrigation in April into standing wheat stubble and are looking fantastic.

Planting irrigated milling wheat - Lancer and durum - finished late May, then we watered it up. You get to cheat with pivots. I love it when all of the crop is in by the end of May. It is good timing for our part of the world.

Come July, we will be spreading urea to both irrigated wheat pivots. These will get a broadleaf and grass herbicide and a preventive fungicide.

Feathertop Rhodes grass seems to have moved from being a summer-only weed to wanting to germinate any time. So we will want to hit it while it is young, in the wheat. We have also prepared two pivots with fertiliser for early sorghum to plant into stubble in August.

I don't mind winter because we can slow down a little bit. I would like to go on a holiday but we are expecting baby number three in mid-July, so we are not going too far.

It is probably the best autumn I have seen. There has been a good turnaround in the amount of rain. It has filled up the moisture profile and we have had really good germination of fodder crops and early cereals.

We have a lot of feed. So, there is nothing to complain about.

Since May, we have had 2000 Merino ewes grazing dual-purpose Manning wheat. We have been moving sheep around between wheat, chicory and clover and we might get a graze out of the Planet barley as well.

We sowed one early paddock of Planet barley in April that could run into a frost risk, so we might have to slow it up with some grazing. The Planet barley is 50:50 dryland and irrigated.

Dryland cereals were direct-drilled and finished by the end of May with Revenue, a winter wheat that I find does better on dryland over Manning. We will get one graze out of it, being optimistic.

In June, we cleaned up a few paddocks, spraying and ploughing some poppy ground.

We will sow early poppies in July and the rest in mid-August. Dryland peas go in mid-July and August, and we might put in some spring wheat. It is looking good at the moment.

Grain prices have taken a bit of a dive, but hopefully will pick-up at some point. We have been pretty lucky.

With shearing, other farms had problems with the 1.5-metre COVID-19 social distancing rule. Their shearing stands were not far enough apart, so they had to drop every other shearer out. Luckily ours were spaced out further, so it did not hold us up at all.