Andrew McDonald, a field officer for grain trader PBI Agrifood, with grower Tom Lewis from Clare, south of Townsville in north Queensland, in a paddock of the new soybean Kuranda HB1.
Photo: supplied

Andrew McDonald is getting used to growers sending him lots of “happy snaps” of their soybean crops.

This winter, north Queensland grain and sugarcane growers have been planting new soybean variety Kuranda HB1 and Mr McDonald, a field officer for grain trader PBI Agrifood, says they are pleased with how it is performing. “Every comment from growers I’ve had has been ecstatic. They send me pictures of their paddocks.” 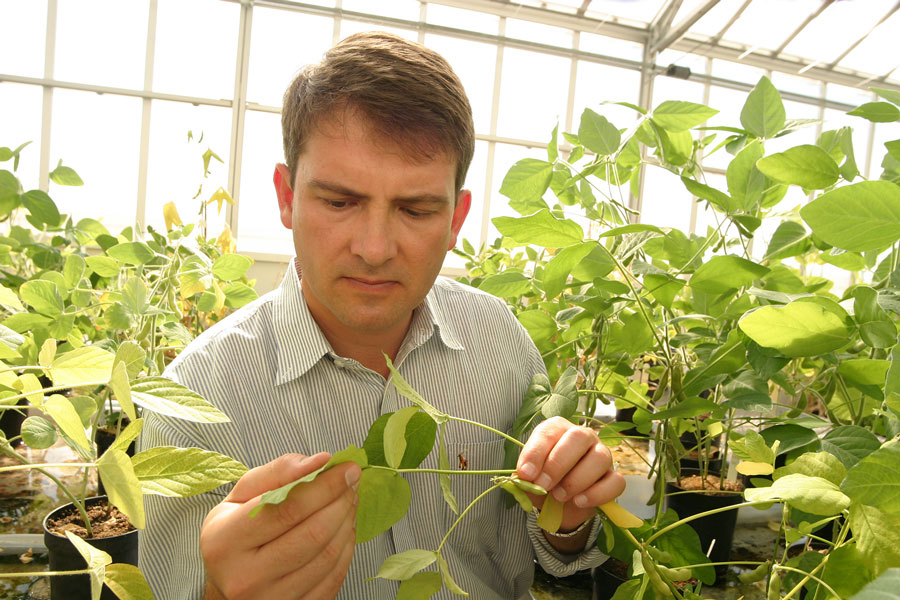 Dr James leads the GRDC-supported National Soybean Breeding Program, and explains that, as a crop, soybeans pair well with sugarcane. Many traditional cane growers in higher-rainfall coastal areas are incorporating soybeans into their rotations and with that comes agronomic challenges – one of them being nutgrass and other broadleaf weeds.

“Halosulfuron is most known for its control of nutgrass and will be of good utility in sugarcane rotations. It also has incidental control of a number of broadleaf weeds and legumes.”

Dr James says this is because of their wide adaptation, made possible because photosensitivity has been reduced. Photosensitivity refers to the trigger that signals a plant to enter reproductive growth stages. In soybeans that trigger to flower and mature occurs when the days shorten.

In traditional US growing regions, breeders have produced varieties targeted to narrow adaptation. “This means some soybean varieties are suited to geographic ranges of only a few hundred kilometres north or south.

“In Australia that’s no good,” Dr James says. “Our planting dates can be all over the place due to variability in cropping systems. Planting opportunities arise in response to rainfall and we have an extended north–south range to our cropping environments.

“So, we need a wider planting window and varieties that have a far greater north–south adaptation, which is what we have produced – varieties adapted to wide geographical and time frame ranges.

“The variety Kuranda HB1, for example, shows really high yields in both the wet season and in the dry season in the tropics. Plus, it has adaptation to an extraordinary north–south range, extending from about Maryborough in the south to the Atherton Tablelands and tropical coast on the north.

“That’s a game changer in terms of removing photosensitivity from soybeans, the bane of soybean adaptation. It came at just the right time for the Australian food industry because soybean production elsewhere in Australia was limited by drought and the Burdekin was able to meet some of the high-value demand.” This image shows how herbicide-tolerant soybeans performed compared to intolerant varieties in a trial at CSIRO, Gatton. Both varieties had a single application of halosulfuron-methyl, commonly known as Sempra®. Photo: Andrew James

An additional bonus is that seed companies can concentrate on bulking up and supplying a smaller number of varieties. PBI Agrifood’s Mr McDonald says he has seen Kuranda HB1 grown from coastal southern Queensland to the Burdekin in north Queensland over the past 12 months. “And it has done well for all growers who plant it in the right planting window.”

He likens Kuranda HB1's release to the release of the mungbean variety Crystal. “Kuranda HB1 has taken soybeans to the next level. It is giving growers options as far as planting windows and weed control is concerned. And, not to take anything away from the other new varieties, but Andrew has a done a great job on Kuranda HB1.”

In the Burdekin, growers can plant soybeans such as Kuranda HB1 twice each year – in June/July and again in December. “This means growers can have two cash crops in the one year, which is great for cashflow. Growers can expand planting opportunities without buying the neighbour’s farm,” Mr McDonald says.

Plus, the nitrogen-fixing benefit of a legume reduces input costs. “One cane farmer told me that he struggled to push his cane stands over, grown after two soybean crops. He had to get a bigger tractor; the soil benefits to his cane crop were a standout.”

Mr McDonald says sugarcane growers are so happy with the variety that they say it has “made them excited about farming again”.

“Halosulfuron has come down in price, too, so those growers with high nutgrass populations are using Kuranda HB1 as a management tool. The work that went into securing the minor use permit has been worth it.”

Using non-genetically modified sources of tolerance is also important as it maintains a valuable point of difference in a global market.

Dr James says the industry is progressively moving towards including more enhanced tolerances to Group B herbicides in soybean varieties. “The first round of varieties we have called HB1. They have the ALS 1 gene, conferring enhanced tolerance to halosulfuron-methyl. This is a ‘naturally occurring’ gene. So, its use will not disrupt markets for human consumption, which require non-genetically modified crops.”

Regional adaptation – New Bunya HB1 is expected to have similar adaptation as its parent variety Bunya. It is well-adapted to irrigated cropping across inland southern Queensland and to northern NSW, with a planting date from late November though to mid-January.

New Bunya HB1 may also be grown as a winter season crop in the Burdekin Irrigation Area with a planting date from May through to the end of June.

Market suitability – New Bunya HB1 should be suitable for crushing, full fat and a wide range of human consumption markets. It is anticipated that it will be strongly sought after by tofu makers.

Breeding – New Bunya HB1, is largely derived from its parent variety Bunya but with improved tolerance to sulfonylurea herbicides, resistance to Powdery mildew and seed-coat splitting. Regional adaptation – Kuranda HB1 appears to be well-adapted to cropping in coastal environments in Queensland from Nambour to the wet tropics. It may also be grown as a winter season crop in the Burdekin Irrigation Area with a planting date from May through to the end of June.

In the southern end of the cropping range, Kuranda HB1 is best adapted to planting dates from late December though to early February, as at earlier planting dates it may become excessively vegetatively vigorous.

Market suitability – Kuranda HB1 should be suitable for crushing, full fat and a wide range of human consumption markets.

Breeding – Kuranda HB1 is largely derived from its parent variety M103-22. It combines broad adaptation and high yield potential with improved tolerance to sulfonylurea herbicides and high resistance to many diseases such as Soybean rust, Purple seed stain and Powdery mildew.

Regional adaptation – Mossman HB1 is a green manure option in many cropping environments due to its long duration and high biomass production. It may be considered as a grain option in the Burdekin and Atherton Tablelands.

Market suitability – It is anticipated that Mossman HB1 grain will be accepted into most crushing, stockfeed and human consumption markets.

Breeding – Mossman HB1 is closely related to its parent variety Leichhardt but with the additional inclusion of a light hilum and some disease resistance genes derived by backcrossing.