Queensland grower Jake Hamilton (pictured with his father, Scott) was harvesting throughout October, hoping to be finished by mid-November.
Photo: Jake Hamilton

Things have turned around a bit with warm weather. We had some mice damage in canola and inundation losses in wheat and chickpeas, but the majority of the farm is doing well as a result of the earlier moisture. We got pretty wet again in early October (65 millimetres) but by then crops were using the rain nearly as quickly as it came, which was good for grain fill.

Crops looked a lot better after we got the urea out. Our new wheat varieties, RockStar and Coota , took on a fair bit of rust so we put two fungicide applications over them. RockStar looked wonderful – a showy-looking crop – but rust affected it pretty badly.

Other wheat varieties held up pretty well. No rust in Kiora , Beckom , LRPB Mustang and LRPB Kittyhawk , so that’s a bonus. The late-sown LRPB Mustang finally turned into a bit of a crop but it’s probably half the plant population I’d like.

Chickpeas were a bit compromised by a fungal attack in the wet, but we managed to get a ground rig on to clean up the grasses and apply an extra fungicide (after the first application by plane). They’re back on track. The linseed we commingled with it (as a strategy to resist fungal pressure) didn’t amount to much. I don’t think it liked the rain and our initial chemistry may have touched it up a little. We might try it next year with different chemicals.

With a tightening in supplies we’ve already ordered a lot of our chemicals for 2022 – pre-emergents, fallow spray and Roundup®. We are still awaiting confirmation on fertiliser (MAP urea) orders and expect some of the shine from this year’s crop to be dulled by its price. I’m also securing seed for more cover cropping over summer.

We were lamb marking over September. We had 117 per cent Merino lambs, which is reasonable for us, and pastures are solid. I also had a couple of weeks off with pneumonia. I could hardly raise my head out of bed. So there was a bit of catch-up applying late cereal sprays. We’ll windrow canola early November and harvest will roll on 10 to 14 days, later depending on the weather. 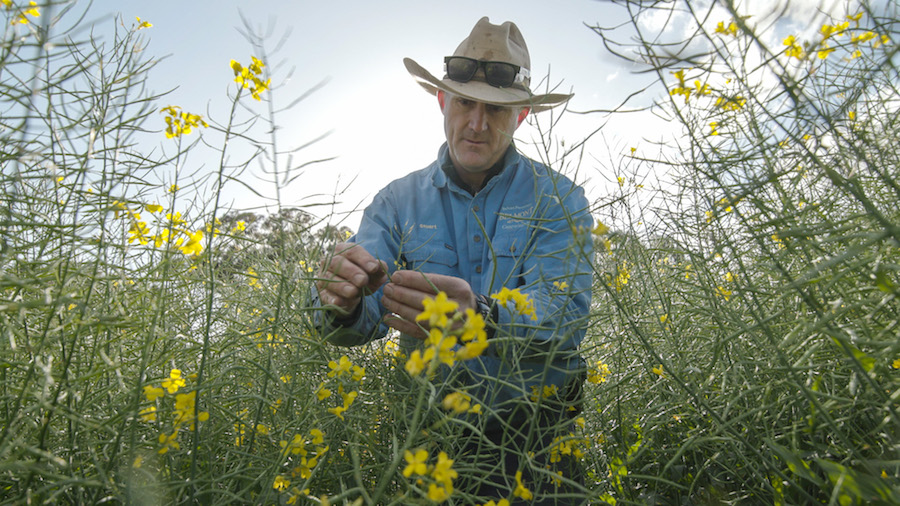 It’s been quite a favourable spring. Crops that were waterlogged and really yellow are now a lovely deep green. The wet winter reduced tiller numbers, suppressed growth and brought poor root development, so it was really important that it was cool as it dried up over September. It allowed the plants to follow moisture down. It if it gets warm too quickly with a lack of root development it can put a real strain on the plants. Milder conditions are brilliant for grain fill and you don’t want hot weather for flowering in cereals either.

Once we got out of the anaerobic situation and lost the surface water (by mid-September) we applied substantial amounts of nitrogen (the third in-crop application) to aid their recovery and bring them home. We’re really happy how they’ve recovered. We’re not going to break any records but think we’ll have good solid crops. Pricing is very strong, so we’re excited about that.

We’ve had a pretty extensive fungicide program. Cereals had two applications and canola one. We’re also trialling a second application on canola with two different products. There’s a few naysayers on fungicide for canola, but we’ve done it for three years and it’s been very successful – three dollars returned for every dollar spent.

We had a little window mid-September to put in spring barley, which is really good because we didn’t plant it until early November last year. You get greater yield potential with every week earlier you go in.

Stripe rust in LRPB Trojan wheat was the greatest problem we’ve battled. We had hot spots even after applying two fungicides. It makes up about half our white wheat and 10 per cent of our total area. In retrospect, we should have purchased more of the newer variety (RockStar ).

We sprayed edges and tracks early October, to minimise weeds getting into the paddocks, and finished the maintenance program in time to cut hay by the end of the month. We’ll go from hay to windrowing, then into the canola harvest and away we go.

It’s been a tale of two seasons with a wet winter and one of our driest Septembers on record. We lost some crops on KI because of waterlogging but since August it’s dried up, they’re back on track and looking really good.

With good yield potential we kept up the nutrition, going over canola four times with 50 kilograms/ha of urea. We put a fungicide and bug spray on beans in October.

Conversely, at Paskeville everything was going great guns over winter but started going backwards without rain in spring. We stopped putting out fertiliser or further nutrition as the season shut off in September. We’ve got a shed full of fungicide that we never used.

Early October we got a long-overdue 15mm of rain, which was pleasing as the crops couldn’t have held out much longer. There’s still potential for average yields (4t/ha for wheat and barley), but probably not above-average like it was looking at the end of July.

In October we were carting manure and stockpiling it where we’ll need it next year at Paskeville. We started cutting hay and wrapped up by the end of the month. Harvest will start early November at Paskeville and December at KI.

We flew up to Queensland for a week between border closures and lockdowns to see my brother at the new property. Things are looking fantastic up there. We planted some black mungbeans, cane was being harvested and sugar prices are really good. It was all happening.

We also had our Paskeville field day – the first in the region for two years.

There was plenty of new, exciting technology, but it was just a really good community event. Paskeville sporting bodies run all the canteens, so we volunteered, cooking steak sandwiches, keeping people fed. It brought a bit of normality into proceedings amid all the shutdowns and was a great success.

Jim and Kate Heal farm at Three Springs, south of Geraldton. They crop wheat, lupins, barley and canola with 20 per cent of their land used for pasture for 2500 self-replacing Merino ewes.

We lacked rain through spring and there were some frost events, but we only had minuscule damage around our creek lines. Our later crops on sandier country suffered in the dry conditions, but they had a little heartbeat and 30mm of rain early October helped them – as well as the September-planted millet and sorghum, and perennial pastures.

Crops were quite soft. Because they were waterlogged early they didn’t have to go searching for moisture, so their roots were quite shallow. The dry spell had them struggling a bit. But they finished up pretty good with the October rain, so I think we’ll have a slightly above-average year.

We cut hay in September. It was a good season with 460 bales from 35ha, which gives us a couple of years’ supply. We weaned and drenched lambs and put them in some perennial pasture. They’ll stay there until the new year, when they’ll be shorn and put on to lupin stubbles.

We started harvesting canola mid-October. With the price continuing to rise we wanted to get it off as quick as we could. Harvest could be slow. We’re expecting some delays with trucks because crops are pretty handy throughout the district. We expect to be wrapped up by mid-December.

Fertiliser prices are the hot topic. There’s supply issues because of COVID-19, China banning exports of phosphate fertiliser (such as MAP) and a cyclone in America that damaged a fertiliser plant. So prices have gone through the roof. Grain prices this year are good, but input costs we will have to pay next year are a bit daunting. I’ve had superphosphate and potash delivered but I’ve still got some to lock away. I’ll wait and see on nitrogen prices – they might pull back later. But apart from that we’ll focus on this year because it will be good.

We sowed poppies early October, two weeks apart and about a week behind schedule because it was quite wet.

We got 60mm of rain as we were sowing, which held things up but meant there was no need to irrigate in October.

They germinated evenly without it. We airseeded straight into paddocks that we had sprayed for annual ryegrass and ploughed late August. 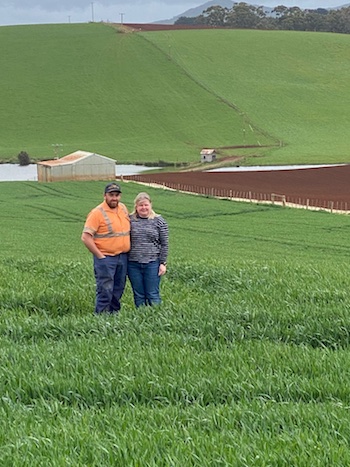 The wet weather was ideal for the wheat. It’s looking really good. We applied nitrogen twice – 150kg/ha of urea in August and 200kg/ha mid-September. It got its first fungicide and growth regulator late September.

We got slugs under control early and there’s been no real pressure. Everything’s on track.

We sowed potatoes from mid-October and will finish by the end of November. Over that time we’ll apply an early herbicide on the poppies to knock the weeds out. We start their fungicide program early November.

We sowed onions mid-September. We’re growing less onions and more pasture this year for beef cattle and dairy agistment. It got a bit knocked around because of the long, wet winter and there was some grub damage.

We sprayed for weeds, targeting dock and thistles.

We have cattle aged anywhere between three and 28 months. Early October we sold a load of 26-month-olds and got a load of 12-week-old calves.

Two hours into harvest in early October it started raining – our first rainfall in 80 days. We ended up with 28mm. Severe September hailstorms passed us in a narrow band, so we were very lucky.

We avoided frosts through the growing season but also any further rainfall from early July until the header started. The tap turned off in a big way and everything had a really dry finish.

We got away with one insecticide application for chickpeas and I’ve got a shed full of fungicide we didn’t use. We’ve also got leftover fertiliser, which is lucky given forecast prices next year.

I’d hate to think what the yield could be if we had rain in August or September because it still looks above-average. Test weight on barley is down a bit and there’s some crown rot around, so time will tell.

Harvest rolled through October with five headers, three chaser bins, four trucks and 15 staff. My wife’s birthday is 15 November and if we’re not finished by then I’m in trouble. One year I’d like to be finished by Melbourne Cup day, but I’m not allowed to travel this year so it’s OK.

October-November is storm season, so once the crops are right to harvest we try and get them into the silos as quick as we can. Weather damage really degrades your grain and you cop price reductions.

We’ll start summer spraying after harvest. We’ll get our residual herbicides down to get on top of germinating grass weeds because we have a fair amount of glyphosate resistance. We’ll also get the bulldozer going, levelling some melon holes, if it stays as dry.

We’re zero-till, so we’ll start building our soil moisture profile for next year.

We don’t have any fallows, so we won’t be growing any summer crops unless we get significant rain before Christmas. And hopefully we’ll have a bit of wind-down time in December once everything’s under control.