Each year, GroundCover™ follows a group of growers from across Australia as they manage the cropping season. In this second instalment, Melissa Marino checks in with growers as they sow the winter crop.

We’ve been fortunate to get good rainfall: 130 millimetres in March, 110mm for February and 80mm for January. The ground was very wet so I didn’t get as much fallow control as I would have liked. Repeatedly bogging the boomspray meant our priority changed from moisture conservation to trafficability in places. 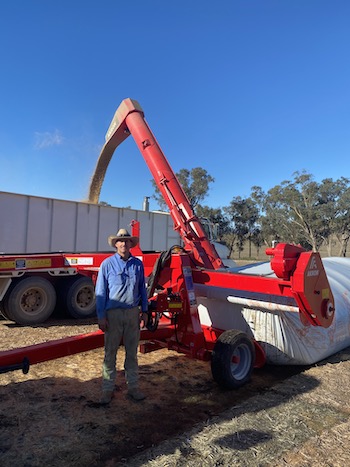 We planted oats and early multi-species forage in early April. Ideally that would be the start of March, but we had to spend some time bedding down our new airseeder and cart. Between that and the rain our program changed. We’re very lucky it’s rainfall driving the change – if it was lack of rainfall driving change our poor timeliness would have cost me big time, but when it keeps raining you can get away with a lot of sins.

We’re planting less forage. The sheep are grazing in lucerne that is nearly over their back. There’s a lot of feed in the paddocks so we’ve dropped our grazing canola and changed to a main-season variety.

We’ve got LRPB Kittyhawk wheat and are trialling two new varieties – RockStar and Coota – alongside Kiora and Beckom . I’m not really committed to any of them after last year – they all showed they have chinks in their armour. They weren’t terrible but we just want to make sure we’re growing the best variety we can.

We’re trying a new chickpea variety, CBA Captain , which seems to stand taller in our area. We’re planting a section with linseed, which apparently can reduce the need for fungicide.

We’ve had no significant rain at Paskeville since spring so we’ve got a pretty dry profile for seeding. But that’s not too uncommon for this area. Generally, we get most of our rainfall during winter, so I’m not concerned at this stage.

At KI we’re sowing into pretty low moisture as well. We started seeding canola before heading into beans, wheat and barley. We sow with the plane on KI, covering everything over with a Kelly disc chain afterwards. We often get bogged with other machinery.

We’ve spread chicken manure over Paskeville and lime sand at relevant paddocks at KI. The manure is spread at 2.5 tonnes per hectare and replaces our starter fertiliser and urea, so when we plant we just sow with seed. It’s not a cost benefit but it’s beneficial for the soil. It provides a good blend of trace elements and phosphorus and potassium, and it adds carbon as well as soil conditioner. We still use granular fertiliser on KI.

We’ve got some supreme noodle wheat to try on KI – our only new crop. We grow soft wheat there and noodle wheat is a similar price premium over hard wheat, but is supposed to yield more so we’re going to try it.

We’ve had a busy March and April leading up to sowing. With a mild, wet summer we battled to get conditions suitable to harvest our spring barley with the right moisture – so we didn’t finish until the end of February. That overlapped with earthworks required to improve drainage and re-form raised beds that slumped and flattened over the season.

We are pleased we planted spring barley because it not only utilised moisture that would have otherwise caused problems for the winter crop, but it yielded just over 5t/ha – a tremendous result. Most cropping zones prefer a full profile of moisture, but it’s dangerous for us. We can end up with waterlogged crops if we’re full at the start of the season.

Re-forming the beds also helps control slugs. The soil disturbance, along with baiting, is enough to depress numbers and help crop establishment. Slugs can decimate an establishing canola crop in the space of two or three days, often requiring resowing.

We’ve had a big lime and gypsum program, spreading at variable rate based on soil testing to help improve pH and sodicity. We’ve saved some money by using variable rate, but importantly we reallocate product to where it’s really required.

With the end date in mind we try to begin our sowing program from 10 April, with pasture seed, then progress to canola and beans. We’ll aim to finish wheat and barley by 25 May.

We got 90mm of rain in February, so we had to do another lap of the farm with the sprayer. It was good to get an extra weed knockdown before planting.

We used a reefinator on our rocky gravel country and spread lime and deep ripped on paddocks. We used a burnt lime for the first time – it costs more than conventional lime but is supposed achieve a pH response at a lesser rate.

We mouldboarded and spaded on non-wetting soil types just before seeding. There’s nice yellow soil underneath with high clay content so we’re bringing that to the top to ameliorate the non-wetting grey topsoil. It also helps the chemical work better and you get a good seed germination.

It’s quite a slow process and it’s another logistical job at seeding, but once you’ve done it the paddocks are changed forever. Our consultant says we should see a 20 per cent gain in yields, so I’m going to hold him to that. We try to do it as close to the seeder as possible to get cover over the paddocks before too many wind events.

The airseeder started with oats, barley and clover for sheep feed. In mid-April we moved into canola and lupins. We like to have wheat in by the long weekend in June.

This year we’re under-sowing lucerne into lupins, mainly to set it up for grazing after harvest. Last year we had a lot of November rain when harvesting lupins and if we had lucerne it would have come up magnificently for sheep feed. It will put more nitrogen into the paddock as well.

We’ve been building contour banks to mitigate impacts of erosion and they held up against nearly 300mm of rain to April. The rainfall will guarantee us a crop now, even if it doesn’t rain again for the rest of the year. We proved in 2019 that we could grow a reasonable crop on nil growing season rainfall. And I’m always optimistic.

We keep all our own seed and graded it and planting was underway with faba beans and early season Sunmax wheat in April. We’ll get into our main season wheat (LRPB Reliant ) and barley planting in some harder country in May and finish with chickpeas. There are no new varieties this year. We got rid of PBA Seamer chickpeas. We find they’re just not suited to our area and seem to be outdone by Kyabra .

It was far too wet for any field work in March so we pulled apart pretty much every piece of machinery we own to find anything wrong. I’m learning a lot of what not to do – like with the sprayer you can spread the wheels nice and wide, and we’ve always found that quite convenient for cleaning, but the mechanic has told us dirt then gets into places it’s not supposed to go – so we should stop that practice.

We harvested wheat in March. It was a bit challenging with cooler and wetter conditions than normal, but yields were between 10 to 12t/ha and quality was good – nice, big, plump grain, which is what our market of dairy farmers want.

It’s our busy time of year. Potato harvest was in full swing by late March and will continue until June. We follow potatoes directly with wheat, with a seven to 10-day break before sowing. Because we grow more potatoes than wheat, other paddocks are planted with an annual or pasture for livestock.

Wheat grows very well after potatoes. The variety of potatoes we mainly grow (Russet Burbank) are pretty lazy so you have to overfeed them. We put an extremely high amount of potash on, so we find there’s always plenty left over for the wheat crop. Then we just top-up nitrogen as it’s growing. Potatoes are very hard on the soil, so we find the wheat is also good for soil structure. We’re growing Einstein, which we find works well for our cool, long growing season.